MIGHTY 25: WWE star and USMC vet Lacey Evans continues serving outside the ring - We Are The Mighty 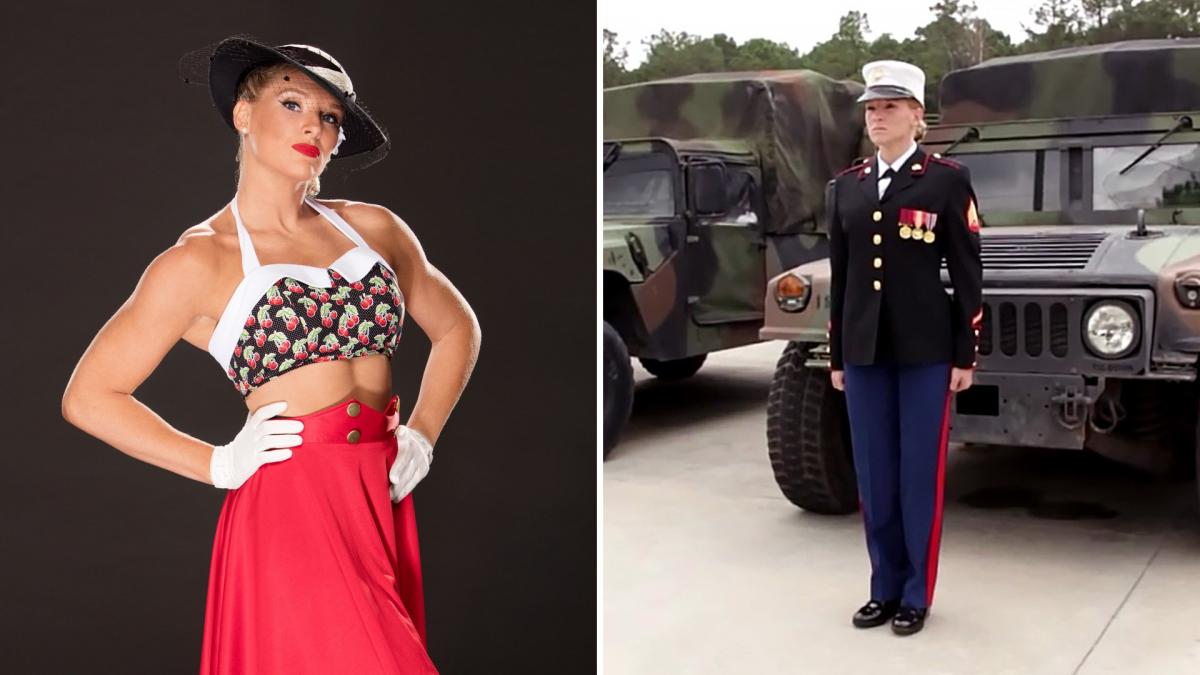 Lacey Evans may be known for her impressive athleticism and skills inside the wrestling world, but she was born a Marine.

“I come from a pretty hard upbringing. My family suffered with mental health issues and addictions. It was just a lifestyle I didn’t like and I wanted a change. However, when you have no role models or no mentors in your family unit, you have to find it somewhere else,” Evans explained.

She headed to her local military recruitment office. But when she arrived, all of the offices were closed.

“As I was dragging my feet back to my car, a United States Marine pulled up and he said, ‘Are you looking for someone?’ and I said, ‘Hell yes, I’m looking for anybody at this point’. From there he explained the differences in all of the branches of service and I knew I wanted to be a Marine,” Evans said.

Going through arguably the toughest training in the military didn’t phase her after making it through such a traumatic childhood. She would only use it to push through the challenges.

“It helped me not break so much with the mental toughness or the verbal toughness that the military gives you. I can handle this because my dad, the things my own father said to me were a hell of a lot meaner. And it came from somebody who was supposed to love me. So you guys can yell at me all day long. I’m not going to give up. I didn’t give up when my dad did it, and I’m not giving up when you guys are doing it,” she said.

Not only did she dig in, she graduated with the record as highest shooter for her company as well as the honor graduate. “I craved and thrived off of being challenged,” Evans said.

Growing up in tents, trailer parks and moving all the time would prepare her for the challenges of military life.

“I pushed myself to become something and succeed in anything. Even in wrestling in high school, I was first in the state of Florida, undefeated and ninth in the nation, and it was because I had to go home to an unhealthy living situation,” She explained. “I think I just went straight into the Marine Corps in the same mindset. The more uncomfortable I am, the more badass I become.”

It was everything she’d hoped for and in her mind, she was born on Parris Island. After graduating from basic training, she became a military police officer.

A few years later, she was the only female Marine on the Special Reaction Team (SRT) assigned to Parris Island. Evans began taking part in backyard wrestling. WWE got wind of it and invited her to tryout in Florida for three days. But she’d have to get leave approval, first. Evans teared up recalling the moment she asked for leave and her Master Gunnery Sergeant’s response:

And she did. WWE offered her a contract on the spot and Evans made the decision to transition out of the Marine Corps. “The military prepared me to take every challenge and run with it as fast as I can, no matter what. And next thing you know I’m on Monday Night Raw with Ric Flair,” she laughed.

You can watch her not only on WWE but Military Makeover with Montel Williams. Widely successful and recognizable, she’s still amazed at how far she’s come. And despite all she’s done, Evans still misses being a Marine. Since she can’t put on her uniform anymore she does the next best thing: uses her voice to advocate for veterans and military members.

“I’ve been blessed and I get to use my platform to give back to veterans and to give back to the military. I also focus a lot on drug addiction and mental health and tell the world life sucks,” Evans said. “Sometimes life is hard and you are going to be put in some shitty situations, but do not stop trying, don’t give up and keep pushing because there’s always a way out. There’s always a light at the end of whatever tunnel you feel like you’re crawling through… keep crawling.”

Evans and her family would eventually lose their father to drugs. “It was one of the hardest things I’ve ever had to go through. He left seven us without a dad and it’s not fair. I just think the world needs to know how much hurt addiction is causing,” she added.

And even with her motivational speeches and ever-present advocacy, you’ll find her being raw on social media regarding her own struggles. “I may seem really, really tough, but I too am broken. You know, being a mother of two, especially right now with postpartum and my emotions, it is so hard and they would be surprised to know I cry more than I’d like to admit. I do it silently and in the bathroom with the door closed,” Evans shared. “But then I have to wash my face and get back in the game. You can too.”