MIGHTY 25: From foster care to Iraq, Tee Marie Hanible continues serving - We Are The Mighty 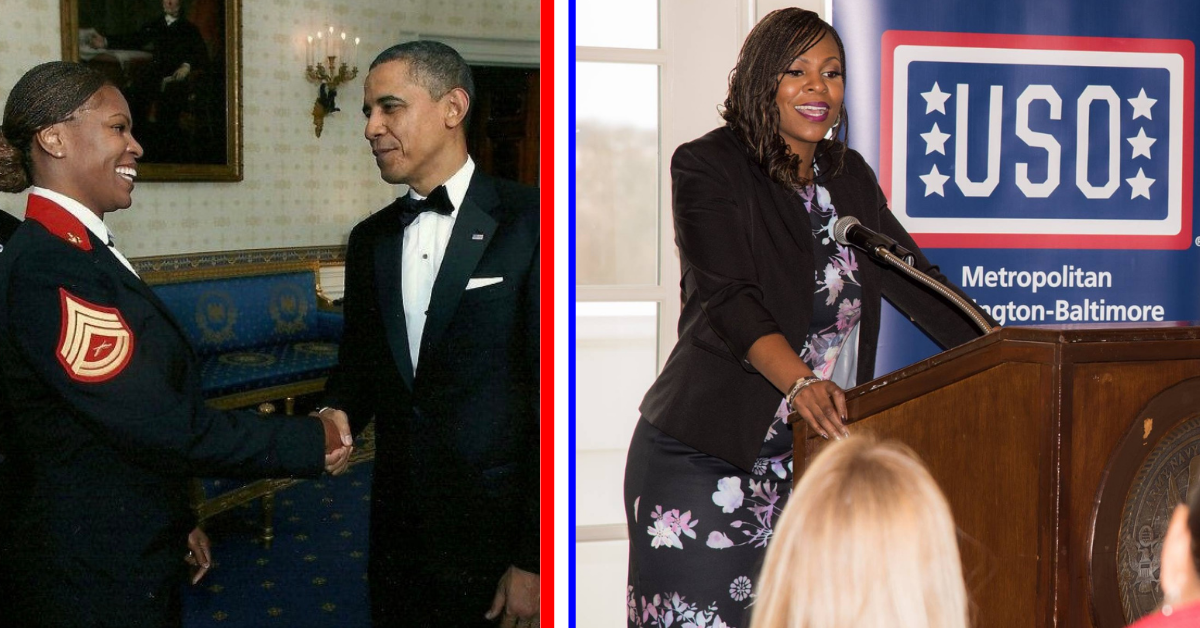 Retired Marine Corps Gunnery Sergeant Tee Marie Hanible spent 20 years actively serving in what is arguably labeled the toughest branch of military service. But this former foster kid youth from Chicago was raised in grit long before becoming a Marine helped her define it.

“I grew up with a simple beginning and was adopted at an early age,” she said. “My father was shot and killed in Chicago when I was only 10 months old. The Department of Children and Families stepped in, taking my brother and I out of the home.”

Her foster parents, Minnie and William Hudson, fostered over 40 children including her and her brother. Despite the support, love and her eventual adoption –– Haniblel was frank in admitting she was heading down the wrong path as a teenager.

Being told she couldn’t do something would change everything.

“ I got to meet my brother and his Marine Corps recruiter in our home one day and really hear firsthand what he was doing. Though I had been thinking about the military, it wasn’t solidified,” Hanible shared. “He was a Lance Corporal at the time and he told me to go talk to the Air Force recruiter because the Marine Corps wasn’t for me.”

Hearing him tell her she couldn’t do it lit a fire, she said. “I became a Marine and always raised my hand first right alongside the boys. I was the first to deploy in my own unit,” Hanible added.

Before she knew it, the Marine Corps became her career. “I just kept saying, this is what I know and what I’m good at, let’s see what else I can do. Each moment became another chapter,” Hanible explained.

Some chapters were more challenging than others –– especially at particular units where she was one of the only women present. “Sometimes you just have to give yourself a little pep talk to start the day. But even when I got to a place where I felt like it was too much, I had mentors step in and tell me I could,” she said.

In Hanible’s words, it was the scary or challenging moments she used to build her strength. From growing up in Chicago after her traumatic early years to getting in trouble and even being a Marine, Hanible saw it all as building blocks. During the invasion of Iraq in 2003, Hanible was the only female in her unit and volunteered for the combat deployment.

Hanible said her adoptive mother’s influence would be the foundation she needed to sustain a 20-year career as a female Marine. When she was deployed, her family stepped in to support her children so she could serve.

In 2016, Hanible retired from the Marine Corps and founded Operation Heroes Connect, which serves at-risk youth — pairing them with service members or veterans in a mentorship program. For Hanible, it’s a tribute to her foster mother. “The groundwork and commitment she laid out for me as I was growing up, I wanted to give back to other kids,” she explained. “I strongly believe in using my voice and platform to do the right thing.”

Her organization also provides community outreach services in the DC, MD and VA area. One of Hanible’s favorite events is the youth summer camp. “We just have an amazing time with these kids. They work with their youth counselor and get to share their story while becoming a part of a legacy,” she said.

Not long after retirement, Hanible joined Fox Network as the only female military expert for the reality show, American Grit, hosted by John Cena. She became the National Veterans Chair for the Women’s March DC Chapter in 2017 and in 2019, published her book, The Warrior Code: 11 Principles to Unleash the Badass Inside of You.

Hanible is proud of her advocacy, the impacts she’s made and non-profit work she’s done, but is quick to label herself as “family driven,” crediting her adoptive family and daughters for any success.

“I still get scared or nervous sometimes but I like to take that energy and put it into what I’m doing. Whether it’s a speaking role or a new business I won’t let being nervous define how I move forward. At the end of the day I get to say I did it, even if I did it scared. It’s not easy though,” she explained.

Sleepless nights, lessons learned and a whole lot of grit has pushed Hanible forward. She also has a self-care routine of utilizing quiet time in a hot bath to reset after challenges. “You have to have those moments. It’s like my own personal counseling session,” she said with a laugh.

As for what the future holds for this retired Marine and advocate, there’s nothing off the table. For starters, she wants to build a scholarship program so kids from Chicago can attend her camps, she said. Her advice for transitioning veterans or members of the military community looking to impact the world were simple: just start.