MIGHTY 25: Retired Marine Queta Rodriguez is using her voice in a big way - We Are The Mighty

MIGHTY 25: Retired Marine Queta Rodriguez is using her voice in a big way 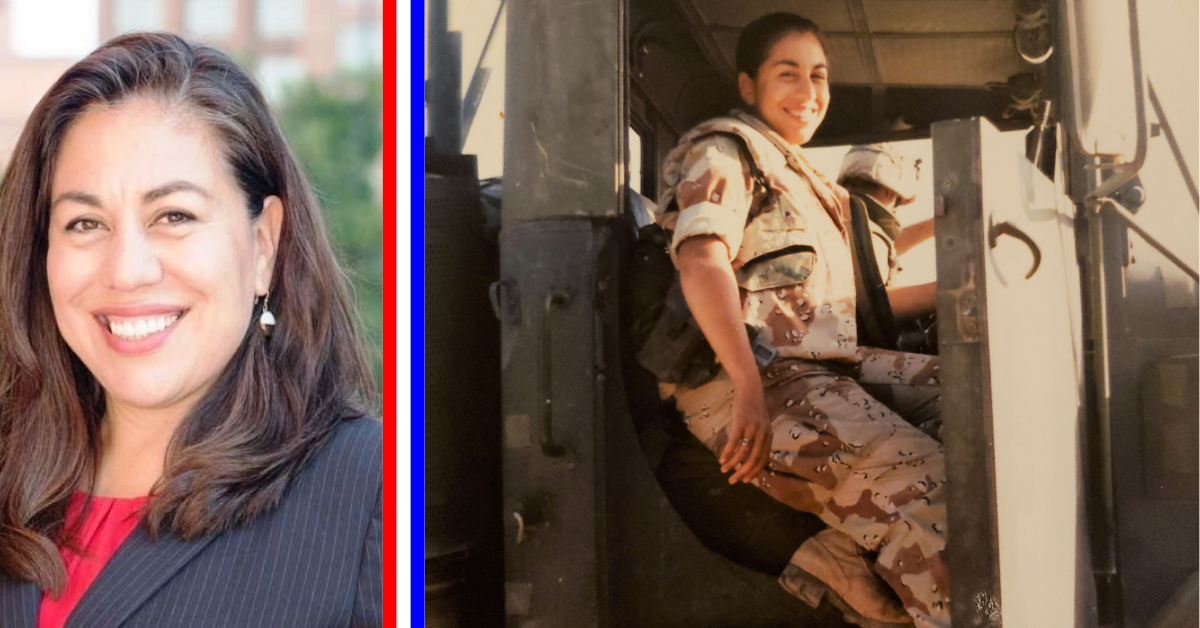 For retired Marine Corps Captain Queta Rodriquez, service to one’s country doesn’t stop when the uniform is put away. In fact, she’s just getting started.

Growing up in a community stricken with poverty and crime would leave a lasting impact on Rodriguez, but not in a negative way. “I was exposed to a lot of challenges that people face and but fortunately for me, I also had two parents that were very civically engaged,” she explained.

Despite being surrounded by hardship in San Antonio, her parents and grandparents were firm about the importance of using your voice for change. It left an impression on Rodriguez and her two brothers and led to all three raising their right hands for America.

Watching one brother enlist in the Navy and the other in the Marine Corps, her interest was sparked. But she never truly considered enlisting until one of them told her what a good Marine she’d make. “I joined the Marines, with the intention of serving four years, getting my GI Bill going to school. This was 1991 and was right after just as the Gulf War was coming to an end. It was something I needed but also something I absolutely wanted to do for myself,” Rodriguez said.

Two and a half years later, she said she fell in love with the Marine Corps. A few more years in and Rodriguez was selected for a commissioning program in 1998. After graduating from the University of Maryland, she earned her commission in May of 2001. “I was at basic school when 9/11 happened and had two daughters at that point. We were all deeply affected by it and really just even further solidified my commitment to serving the country,” she shared.

Though she began her enlisted career as an intelligence analyst, after commissioning she became an Adjutant and Manpower Operations Officer. Rodriguez was deployed to Okinawa for six years until her assignment. Her final assignment was U.S. Marine Corps Forces Central Command (USMARCENT), which had her deploying extensively all over the Middle East.

“It was a very rewarding experience but definitely very challenging and difficult. Having to replace and train administrative offices as they were getting set up in the theater while witnessing loss wasn’t easy,” she admitted. Rodriguez proudly served until her retirement in 2016. She credits her time as a Marine with everything, including the way she moved forward after leaving it behind.

After transitioning out, she found her way back home to Texas. Not yet working, Rodriguez began volunteering with an organization working to build a veterans monument in San Antonio.

“Someone approached me after hearing me speak and said they were looking for someone to lead their newly created county veterans service office. I didn’t even know what a VSO was at that point,” she said with a laugh.

Though living some distance away in Austin, she went to the interview to be kind. She said by the end of it she was talking herself into why she had to have the job. And she did, for five years.

“San Antonio has the second largest population in the state of Texas for veterans. It definitely had its challenges understanding the different demographics. We are a deeply minority filled city with underserved populations and older veterans,” Rodriguez explained.

Her new role at Four Block has her taking supporting veterans at a higher level. “I am the regional Director and we help transitioning service members find meaningful careers. I want everyone to have the experience because it definitely leads to a higher quality of life,” Rodriguez said. Using her voice for good has been a part of who she is for as long as she can remember, she added.

It would prepare her for the next challenge.

In 2020 Rodriguez was appointed to the committee for an independent review of the culture of Fort Hood, following the alleged murder of Vanessa Guillen after her reports of sexual harassment. As a woman who had enlisted during the Tailhook Scandal, it was challenging.

“It is frustrating to still be here and decades later talking about the same things,” Rodriguez said. “I was grateful to be a part of the committee. We knew our review would cause a look across the entire Army but we knew what we produced had the potential to go military-wide. As a former leader of military service members, a proud Latina and woman, you know all of it was personal, too. But at the same time it was always about doing what’s right.”

Her work led to extraordinary changes within the Army.

“I can speak to my experience as a Marine. There’s a sense of loyalty, like you don’t want to speak up or talk bad about the military, right? But as a leader our obligation is to do what’s right,” Rodriguez said. “This includes changing the culture. I don’t think I did enough either. In retrospect I would have done more. But you cannot legislate culture and it begins with leadership.”

These are lessons she learned from her grandmother, a former migrant worker who didn’t speak English. “She only went to school until the second grade. But she had this fire about her and actually took part in the strikes at a factory where people were working in unsafe conditions. Despite not having a formal education she knew what’s right is right,” Rodriguez explained.

As she reflects back on her life, the word she comes back to often is blessed. Her mindset of service and purpose is one she hopes other veterans will find, too. “You have value and can do so much for your community. Whatever makes you the happiest, go for it. I’ve made mistakes in my own life but I’ve grown from them. Continue to move forward,” Rodriguez added.

As for the girl who never set out to become a trailblazing and powerful Latina-female voice in what has always been known as the “good ‘ol boys club” –– it’s a title Rodriguez said she’ll always work to earn.

And here at We Are The Mighty, we think she has. It’s why she’s MIGHTY.