MIGHTY 25: Vietnam Veteran Justice Eileen Moore honored for lifetime of advocacy - We Are The Mighty 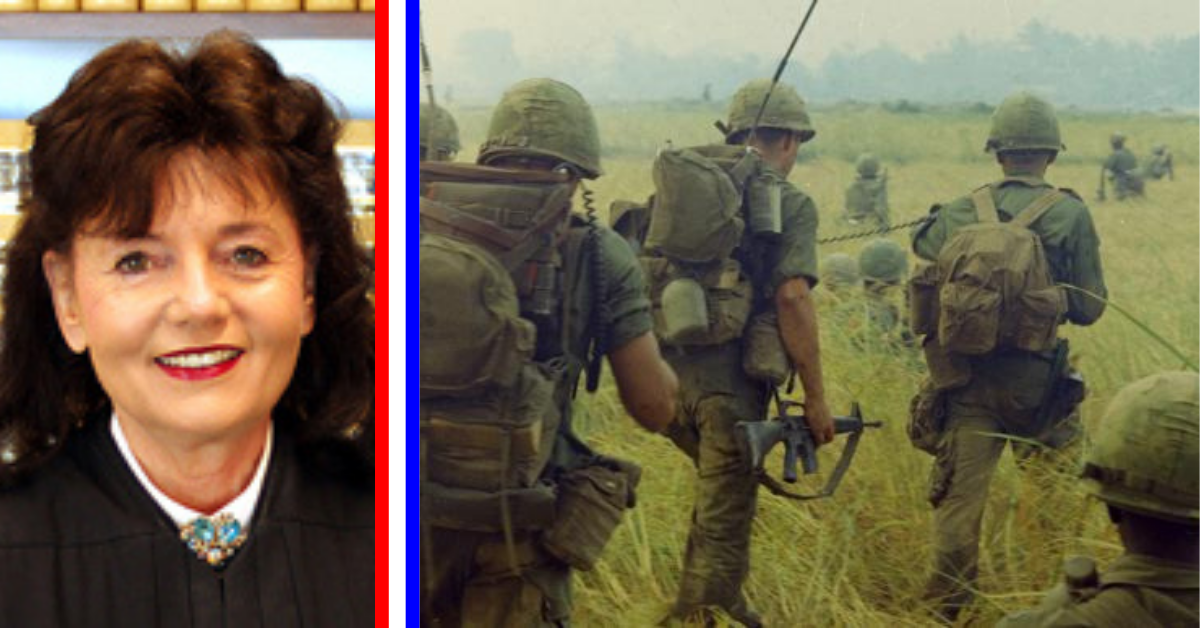 Justice Eileen Moore is a trailblazer for women. But if you’d told this Vietnam War Veteran this is where she’d be, it wouldn’t have seemed possible.

“I grew up in an Irish Catholic family and there were 10 of us. Though we weren’t what they called dirt poor we were pretty close to it,” Moore recalled.

Moore’s mother had to drop out of high school to support her brothers and sisters after her own mother died in childbirth. Knowing she didn’t want to end up without options or like the other girls of her time, Moore started to formulate goals and ideas for the future.

When she talked about wanting to go to college, her father told her the money had to go to the four boys in the family for their education because she’d be married soon and wouldn’t need to work. So when the Army Corps of Nurses came to her school talking about the benefits of signing up and earning the GI Bill, it seemed like the answer.

In 1966, only months after completing her training, she was in Saigon assigned to the 85th Evacuation Center of Qui Nhon, a military field hospital in central Vietnam. On her first night, she endured an attempted assault and rape by Army officers.

Brought to the nurses quarters by a colonel, the knocking on her door started immediately after he walked away — pleas to come have a drink or two, which she declined. Hours and probably some drinks later –– the derogatory name calling began.

“And by the time the wood was splintering and I started to see a fist coming through I jumped out the window and I found the guard,” Moore shared. She said he refused to leave his post, so she dragged him by his belt to her window. At that point, the men were partially in her room but the guard didn’t run to rescue.

Instead he put his rifle down, saluted them, and apologized for interrupting them. “I told him not to salute them but to shoot them. But it was a major and a captain. That was my first night in Saigon,” Moore said. Though she sought help in the morning, the commander seemed to be disappointed to miss out on the fun more than anything.

“What’s going on today with our women veterans has been going on for a long time and they have been encouraging it and not doing anything to stop it at the level where it really happens,” she said. “They haven’t been serious about it. It takes the public doing exactly what the public’s doing now and it takes for Vanessa Guillen to die in order to bring about some changes.”

Moore learned to be careful, avoided going anywhere at night and asked for escorts often. When she wasn’t worried about her safety, Moore was working long hours covered in blood as she nursed soldiers injured in combat. After six months, she was sent to West Germany for two and a half years.

When she completed her tour of duty and was sent home to the United States, she learned to hide her Army service like the other soldiers of the time. Originally from Philadelphia, she ended up in California after her service in the Army.

A book would change her life. “I came back from Vietnam and I read a book by a woman named Betty Friedan called The Feminine Mystique and it almost set my mind on fire thinking that maybe little miss nobody, the daughter of a high-school dropout and a girl like me could actually study at a university,” she explained.

In her words, she put on her dainty size nine heels and kicked open the door at University of California-Irvine, graduating in 1975. Moore joined a special sociology program studying women and upon graduation, she was told law was a good path for her.

“I graduated from Pepperdine University School of Law in 1978 and never looked back. After practicing for a little over 10 years, the Governor of California appointed me to the California Superior Court,” Moore said.

In the mid 90s she was asked to speak at the local Vietnam Veterans of America, where they were having a special event at the Richard Nixon Presidential Library.

“Off to the side were three rows of disheveled, pitiful looking men in old fatigues and I thought to myself, ‘Vietnam Veterans, homeless and self-medicated’. After I spoke these three rows of men were completely surrounding me and each one had to touch me somewhere,” Moore said. “I realized from some of the things that they were saying that they had absolutely no good memories about Vietnam, except the nurses.”

Those moments would begin her journey to support veterans, of all wars.

“I saw the first Iraq veteran homeless and then I kept reading that there are more and more in that situation. I thought they would do something within the court system because the public’s going to do the same thing that they did to our Vietnam Veterans,” Moore said.

“I just got busy within the courts. I started the Veterans and Military Families Subcommittee for the Judicial Council,” Moore explained.

Though she couldn’t personally advocate, she could talk to people. She convinced the “powers that be” to enact legislation for veterans within the court system.

With California having some of the most strict sentencing guidelines in the country, Moore was concerned. “All I could think of was that I could see some prosecutors arguing how they are trained killers,” she explained. “I thought, ‘My God, that means that somebody who served their country became ill as a result of serving, they could end up getting a higher prison sentence because of that.’ So, and I’m not allowed to advocate personally for any kind of legislation, but I got word to the state of California and to Vietnam Veterans of America and they got word to their lobbyists, that the word ‘mitigation’ should be added to that statue.”

The law protecting veterans went into effect on January 1, 2015, thanks to Moore’s efforts. This legislation forced judges and prosecution to acknowledge veterans’ service and the impacts of it when sentencing. It led to opportunities for treatment, rehabilitation and record expunging.

By 2020, there were 34 veterans treatment courts within California.

When Moore grew frustrated with the lack of understanding and education, she started writing. “I started writing articles for the largest legal newspaper in California called The Daily Journal and I’ve been writing an article each month about something to do with the military, mostly veterans issues,” she shared.

It’s important to note how despite the way she was treated as a female nurse and soldier all those years ago in Saigon, Moore has spent most of her adult life looking for ways to support veterans. Her advocacy, commitment and voice has changed the course of history for those who serve and have served.

She is MIGHTY and so much more.