MIGHTY 25: Oscar Mike's Noah Currier is helping veterans discover their next mission - We Are The Mighty 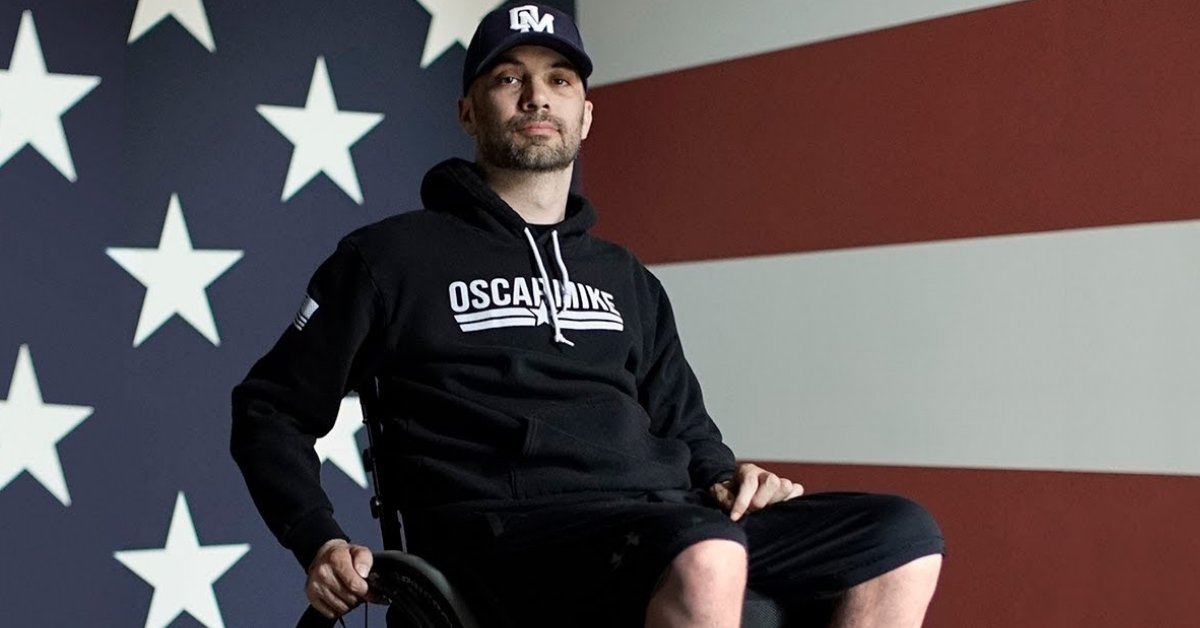 Marine veteran Noah Currier was one of the first to deploy following the attacks on 9/11 and although he made it home, a tragic line of duty accident would leave him paralyzed. But instead of giving up, he created the next mission.

Currier’s father was a Marine in the Vietnam War and he’d always looked up to him. Currier remembers drawing a picture of the Eagle, Globe and Anchor and committing to becoming a Marine as a small child. In 2000, he did it.

And a year later, he was at war.

“I spent a year on a ship for Operation Enduring Freedom and saw the world. Then we came home for a few months, went back overseas. Iraq First Armored Reconnaissance Battalion was my unit and we led that push for the Marines in our area north of Highway One all the way up to Tikrit and came home unscathed after the invasion,” he explained.

Three days later, a Marine driving Currier fell asleep at the wheel right at the gate of Camp Pendleton. Currier broke his neck. Though he had immense support in his therapists and his long-time girlfriend, tragedy struck again when she was killed in a car accident.

“I just gave up on everything. I had no drive to do anything anymore and I felt like everything had been taken from me that was worth living for. And then spent six years of racing for the finish line, hoping for the worst. There was lots of addiction and bad choices,” Currier shared. “I went to an adaptive sporting event against my will. I felt alive for a couple of days and kind of had a new lease on life and a different outlook. I spent those few days with 400 other disabled veterans, injured veterans, all sharing stories like mine. And all of a sudden, I had a lot of new perspectives. I wasn’t alone in that situation. There were a lot of other people that had been through the same types of things that I had. And I don’t know, it just immediately changed things.”

In his words, he started it all – his life, again. Currier went skydiving, registered for college courses and even wheelchair games. As he gathered with some of the other participants at the National Wheelchair Games, they discussed the need for opportunities.

Those moments sparked the idea for Oscar Mike.

A few of his friends came to stay with him and set up his garage for the nonprofit organization focused on adaptive sports. “We’re about to hit our 10 year anniversary here on Veterans Day and have come a long way since those days in the garage,” Currier smiled.

The nonprofit organization is completely devoted to ensuring veterans have the opportunity to participate in life-changing adaptive sports. It has become a favorite within the military community, surprising even Currier with the passion for the brand.

“Every time someone shows me an Oscar Mike tattoo it’s pretty unbelievable. I always ask them why they got it and the answers are always really cool,” he said. “For many it’s like an alarm clock to just keep going. They use it as their way of seeing perspective, like life isn’t so bad today.”

As for the future of Oscar Mike and what Currier hopes to accomplish, the possibilities are endless.

“We’ve got a bunch of big plans for the future. Right now, we started a capital campaign and we’re going to build a new facility to be able to offer more programs, more equipment. We want to just keep enhancing everything we’re doing,” he explained. “According to statistics there’s over 900,000 disabled veterans with a 70% or higher disability rating with the VA. There’s just a ton of people out there who could use things like Oscar Mike and we just want to be able to have as many touch points as possible. You know, it’s one of those things where you never know when it’s going to come into somebody’s life, right at the right time.”

Just like it came into his and saved it. “I eat, breathe and sleep all of this,” he admitted.

Helping veterans find purpose is one of the goals of Oscar Mike but it doesn’t mean it’ll be served on a platter, Currier added. “I would always encourage people to get involved even if it’s not with us but within our community,” he said. “If they’re longing for it or if they want it, if they crave it or if they desperately need it. There’s a whole bunch of reasons to get involved. And we’ll be here to support you.”

This Marine will make sure you have your next mission regardless of where you are in your transition or injury. It’s why he’s Mighty.