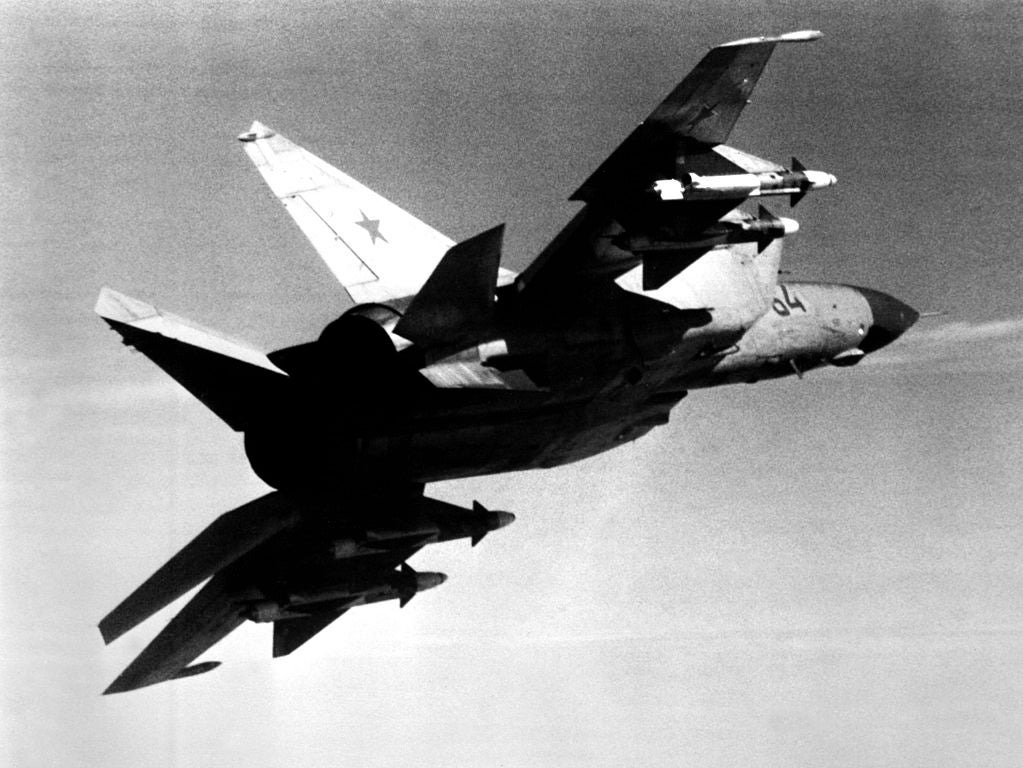 The MiG-25 Foxbat is not only the fastest fighter but also the highest flying, thanks in large part to two massive engines that generate over 45,000 combined pounds of thrust with afterburners. Those bad boys pushed the plane to Mach 2.83. It set 29 speed, altitude, and time-to-climb records, according to HistoryNet. But, believe it or not, the whole thing was a compromise with wings, and early American fears of the jet turned out to be overblown. Despite that, there might still be a few of them still kicking around in Syria and Algeria. (But Syria’s are thought to be grounded currently and Algeria is reportedly replacing theirs.)

So what made the plane so scary? And how did Americans eventually learn to thumb their noses at it?

The case for the MiG-25 Foxbat

But first, why rush a superlative fighter into the sky at all? Well, that was partially America’s fault. Ever heard of the Cold War? It was a huge deal for a long time. Basically, America and the Soviet Union were on opposite sides of World War II, then on the same side but without trusting each other, and then arrayed against each other again as the war ended. So, enemies, colleagues and enemies. And it was during this second enemy phase that the U.S. and Soviet Union ended up in a big arms race.

In 1964, America took a big step forward in that arms race. That September saw the first flight of the XB-70 Valkyrie, an experimental bomber that could fly over three times the speed of sound, Mach 3.1. That was too fast for anything in the Soviet arsenal to chase down. There wasn’t a pilot in a fighter, a missileer on the ground, or a redneck on a lawnmower that could keep up. Not even The Waterboy after Vicki Vallencourt souped his up. And the Soviet Union had lots of border and even more interior airspace to guard. So they needed a cost-effective, fast-moving solution.

Where U.S. weapon designers would likely create a daunting list of engineering requirements and then turn to a bunch of exotic materials and designs to get the to the intended effect, Russia just jammed two copies of the most powerful engine it had on hand into a commonly used nickel-alloy skin. The amazing Soviet espionage services got advance word of the XB-70, and the MiG-25 Foxbat also flew for the first time in 1964, but its public debut was a single flight at the end of a 1967 air show.

The design had two Tumansky R-15 turbojet engines. These were massive, mostly steel engines originally destined for use in cruise missiles. Since cruise missiles are typically, you know, blown up at the end of their first flight, they weren’t exactly designed for a long service life. These were disposable, cheap, but extremely powerful engines. Early Foxbats needed new engines every 150 flight hours. Less if they were pushed to top speed and had afterburners engaged.

Meanwhile, the nickel-alloy skin of the plane was expected to survive for quite a while, and it was selected in part because it would be easy to maintain. Maintainers at nearly any air base could work with the material and even weld with it, so battle or flight damage could be repairs anywhere.

America drops a brick in its pants

That 1967 airshow was a real emotional moment for American weapon designers. The dramatically revealed Foxbat looked a lot like the plans for the program that would later become the F-15. The wide wings hinted at its fast climb rate as well as high maneuverability. The big engines and air intakes had them worried that the fighter used an advanced engine. And they assumed it was using exotic materials like titanium that the Soviet Union had a lot of.

So the U.S. folks quickly built up this Soviet in their minds, assuming that everything they could see was a sign of further danger that they couldn’t see. Good thing we had never done that before. Or did it again pretty recently.

The F-15 was rushed forward to try and keep up with and counter this futuristic Soviet threat. We needed something to counter this bad boy and potentially escort fighters to target, like in World War II but at supersonic speeds.

Then the whole MiG-25 Foxbat issue sort of resolved itself

It might seem weird, but we never really, truly fixed the Foxbat issue. A few developments made the threat more remote, and then America learned about all the design concessions.

First, the development of quality Soviet surface-to-air missiles made the XB-70 a sketchy design. The Air Force kept pushing for a while, but the need for even it to fly at low altitudes to avoid missiles made it unnecessary to field the expensive bomber design. The XB-70 was put on hiatus as a bomber design while two prototypes were used for experiments. Until one of them was destroyed in an aerial collision that killed both XB-70 pilots. The bomber was shelved.

But there was still reason to fear aerial duels between the F-15 and MiG-25, right!? Well, the U.S. thought so until a Soviet defector swung by Japan and left his plane there for America and its allies to get a good look at. The U.S. gave the pilot American citizenship and then dug through the MiG-25 like it was a Kinder Surprise. One of the Canadian ones with the toy actually inside, not the U.S. Kinder Joy things.

That was when the U.S. realized the plane wasn’t as agile as they thought, had more radar problems than they’d assumed, and had engines that were a nightmare to sustain. The F-15, it was clear, was already at least on par with the MiG-25 and likely better.

Stil, no fighter can quite touch the MiG-25 for speed. Of military aircraft, only the SR-71, its variants, and the XB-70 were faster. It remains a popular example of extreme engineering and a draw for aviation enthusiasts.