The Army Air Forces had a dive bomber during WWII 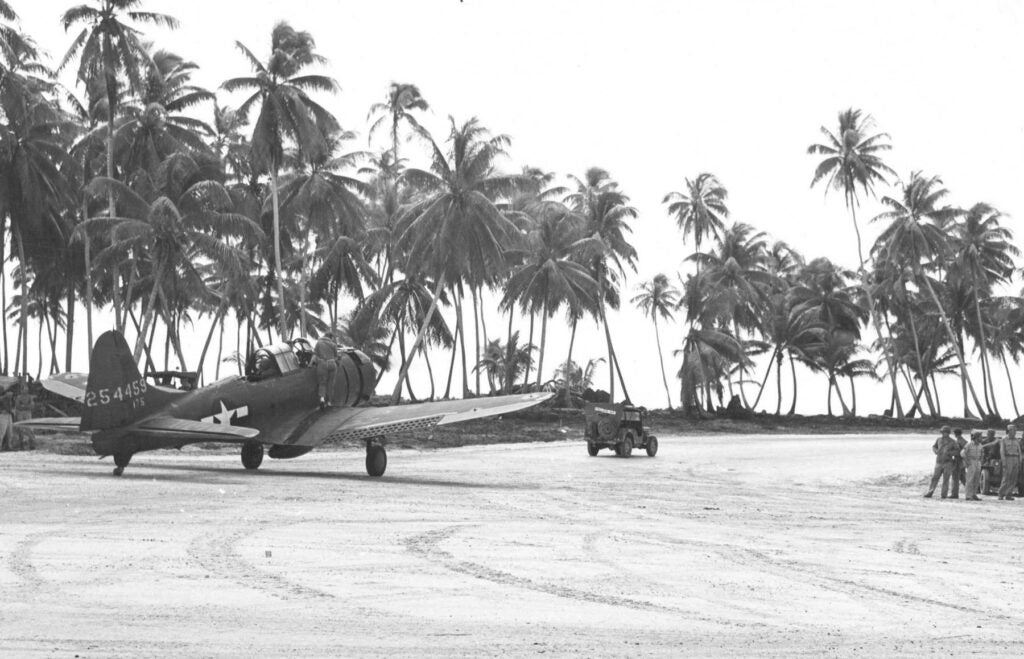 Before the advent of precision-guided munitions, dive bombing was the best way for a bomber to ensure its payload hit the intended target. By climbing to a high altitude and descending nearly vertically, a dive bomber pilot could keep the target in sight during the run which allowed for increased accuracy. By contrast, level bombers had to drop their bombs in mass formations in hopes of hitting their target. One of the most famous dive bombers of WWII was the U.S. Navy’s SBD Dauntless. SBDs sank or fatally damaged all four Japanese aircraft carriers at the Battle of Midway. Interestingly, the Army Air Forces also had their own version of the Dauntless.

The Marine Corps was the first to acquire the SBD in late 1940 with the Navy following shortly after in early 1941. Seeing the success that the Germans had with dive bombers in Europe, the Army decided it needed its own dive bombers too and placed an order for the SBD. The Army acquired the SBD-3, the latest version at the time, and designated it the A-24 Banshee. Manufactured by the Douglas Aircraft Corporation, the Banshee was nearly identical to the Navy and Marine Corps versions. It featured Army instrumentation and radios, omitted the tail hook used for carrier landings, and replaced the solid tail wheel with a pneumatic tire.

The first A-24s were assigned to the 27th Bombardment Group (Light) at Hunter Field, Georgia. The Banshees participated in the Louisiana maneuvers during September 1941 which validated the Army’s battle doctrine prior to America’s entry into WWII. Afterwards, with war looming in the Pacific, the 27th and their Banshees were rushed to the Philippines. However, before they arrived, the Japanese attacked and the planes were diverted to Australia.

While their planes arrived in Australia, the men of the 27th landed in the Philippines. Under siege by the Japanese, the pilots of the 27th were flown to Australia to help the Aussies reassemble the Banshees and back fly to Philippines to evacuate their enlisted ground crews who were still trapped there. However, the planes arrived in poor condition. They were crated right after the Louisiana maneuvers and required heavy maintenance before they could fly. Despite the best efforts of the Australian mechanics, the enlisted men of the 27th were overrun with the rest of the American and Filipino defenders and subjugated to the brutal Bataan Death March.

Due to the mechanical problems, the A-24s were diverted to the 91st Bombardment Squadron and assigned to defend Java. Although 15 Banshees were repaired, accidents and further mechanical issues left only seven aircraft combat ready when they arrived in Java on February 17, 1942. The Banshees that could fly had worn out engines, no armor plating, no self-sealing fuel tanks, and no fighter support. Still, the pilots of the 91st flew bravely against the Japanese. They successfully attacked the enemy harbor and airbase at Bali and sunk multiple ships around Java. Still, the Japanese were able to shoot down two A-24s and severely damage three more. Combat ineffective, the 91st was ordered to withdraw from Java in early March 1942.

The Banshees that remained in Australia were eventually repaired and assigned to the 8th Bombardment Squadron, 3rd Bombardment Group. Their mission was to defend New Guinea against the Japanese attack. On July 29, 1942, seven A-24s attacked a convoy off Buna. However, the attack was a disaster. The Japanese shot down five Banshees and damaged another so badly that it couldn’t return to base. Army pilots regarded the A-24 as too slow, too short-ranged and too poorly armed. The remaining Banshees were relegated to non-combat roles like reconnaissance. In the United States, A-24s were used as training aircraft or towed targets for aerial gunnery.

In 1943, Douglas introduced the upgraded SBD-5 with a more powerful engine, improved top speed, and higher service ceiling. It was adopted by the Army as the A-24B. The 407th Bomb Group flew the upgraded Banshee against the Japanese at Kiska, Alaska, in July and August of 1943. The Army also employed the A-24B during the Gilbert Islands campaign.

After the war, a few A-24s remained in service long enough to be handed over to the newly formed Air Force in September 1947. The new branch redesignated the Banshee as a fighter and renamed it the F-24. Banshees continued to serve in the Air Force Reserve until 1950 when they were retired.