The F-14 Tomcat was designed around its engines, radar and missiles - We Are The Mighty

The F-14 Tomcat was designed around its engines, radar and missiles 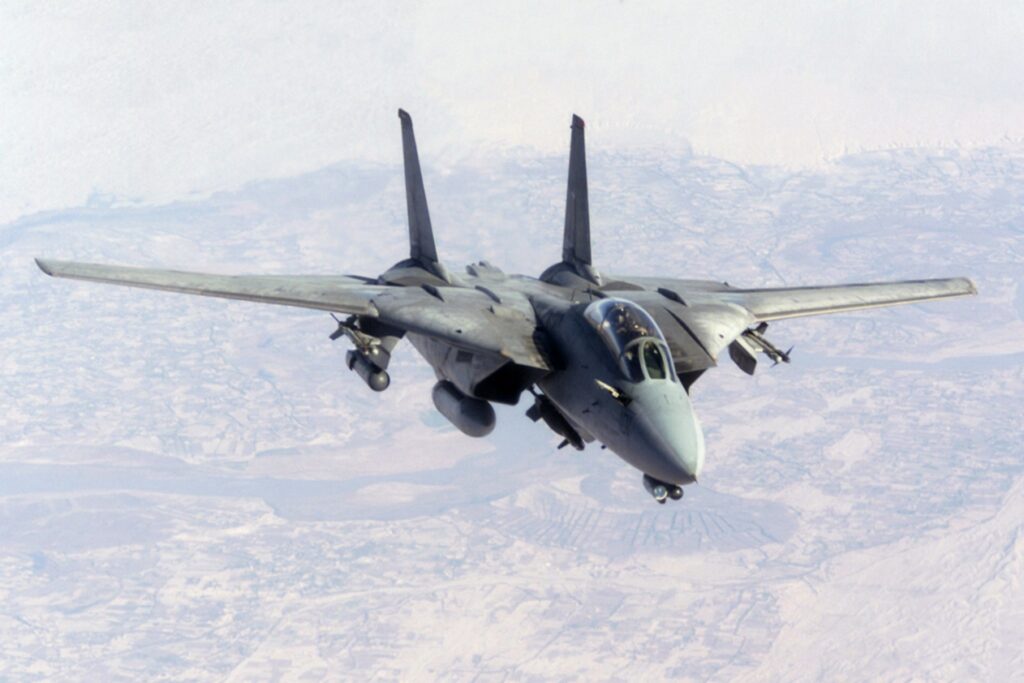 Whereas multirole aircraft inevitably result in a compromise of capabilities, aircraft designed and built for a specific purpose will inherently excel in that role. For example, the ever-popular A-10 Thunderbolt II was the Air Force’s first aircraft designed exclusively for close air support and was built around its iconic 30mm cannon. Mission-specific design also made the F-14 Tomcat an exceptional Cold War fighter-interceptor.

In the late 1950s, the Soviet Union’s long-range anti-ship missiles created a new and serious threat to the U.S. Navy’s carrier battle groups. Enemy jet bombers were capable of deploying such missiles from beyond the protective air screen of the Navy’s fighters at the time. The F-4 Phantom II was fast and boasted a capable radar for long-range interception, but the Navy needed more.

The F-111B was developed for the Navy in parallel with the Air Force’s F-111 Aardvark. With its variable-geometry wing design and powerful engines, the F-111B had the potential to serve as the Navy’s Fleet Air Defense fighter. However, its heavy weight and poor maneuverability, the result of the Air Force’s emphasis on the aircraft’s role as a tactical bomber, plagued the F-111B with performance problems under Navy evaluations.

General Dynamics, the main contractor of the F-111B, partnered with Grumman to leverage the company’s experience building Navy aircraft. In 1966, the Navy awarded Grumman a contract to study advanced fighter designs and refine the F-111B. Two years later, the F-111B project was canceled, allowing the Navy to propose the Navy Fighter Experimental Program. VFX, as it came to be known, called for a two-seater, twin-engine, air-to-air fighter with a top speed of Mach 2.2. Building on lessons learned in Vietnam, the aircraft was to be armed with a 20mm M61 Vulcan cannon and either six AIM-54 Phoenix missiles or a combination of six AIM-7 Sparrow and four AIM-9 Sidewinder missiles.

Thanks to their research under the F-111B project, Grumman had an advantage in the VFX competition. The company reused the variable-geometry wing and TF30 engine from the F-111B. Moreover, its VFX submission was built around the powerful AWG-9 radar and AIM-54 Phoenix missile. Combined with the requirement to carry an internal fuel load of 16,000 lbs, the new aircraft was large and heavy, but lighter and far more maneuverable than the F-111B. In January 1969, Grumman was awarded the VFX contract and its design was designated the F-14.

The F-14’s first flight took place on December 21, 1970. Development was accelerated to avoid cancelation and, in 1973, the aircraft reached initial operational capability. During its development, the F-14 saw upgrades to its Phoenix, Sparrow, and Sidewinder missiles, making it more lethal. Testing resulted in a Phoenix kill at 200 km and an 80% success rate in a rapid-fire Phoenix volley. Thanks to these capabilities, the F-14 excelled in its roles as the Navy’s air superiority fighter and fleet defense interceptor.

In the 1990s, the upcoming retirement of the A-6 Intruder led to the revival of the F-14 air-to-ground program. Live bomb trials were previously conducted in the 1980s and, in 1992, the F-14 was authorized to drop unguided bombs. Following Operation Desert Storm, the F-14 underwent avionics and cockpit upgrades to allow for the use of precision-guided munitions and increase the aircraft’s defensive capabilities during ground attacks. When equipped with ground-attack ordinance, the F-14 was dubbed the “Bombcat.”

Interestingly, the F-14’s Tomcat name was chosen partially to recognize the contributions of Vice Admiral Thomas F. Connolly to the aircraft’s development. Throughout the program, the fighter was given the nickname “Tom’s Cat.” The name was also in line with Grumman’s tradition of naming its fighter aircraft after felines like Wildcat and Hellcat.

The Tomcat’s logo was developed by Grumman artist Jim Rodriguez at the request of former Blue Angels No. 5 pilot Norm Gandia. “He asked me to draw a lifelike Tomcat wearing boxing gloves and trunks sporting a six-shooter on his left side; where the guns are located on the F-14, along with two tails,” Rodriguez told Grumman Memorial Park. The Tomcat slogan, “Anytime Baby!” was also the brainchild of Gandia who came up with it as a challenge to the Air Force’s F-15 Eagle.

Although the F-14 has left U.S. Navy service, its legacy from the Cold War into the early years of the Global War on Terror make it an integral part of the service’s history. Moreover, its appearance in media like JAG and Top Gun have etched it into pop culture for decades to come.