The famous Civil War surrender painting isn’t at the Smithsonian 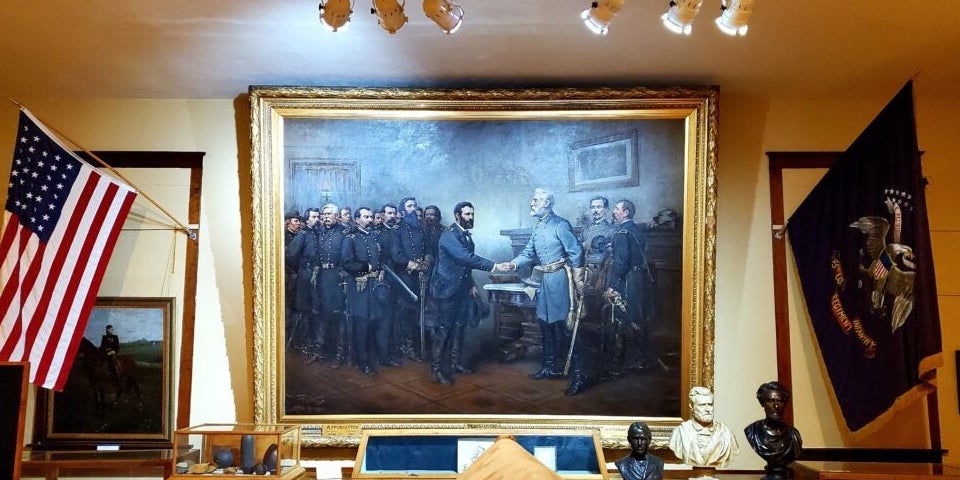 The Smithsonian Institution is the world’s largest museum, education and research complex. It houses treasures of American history like Rockwell illustrations, Lincoln’s top hat and even an Apollo 11 moon rock. However, despite the institute’s best efforts, one piece of iconic American history does not reside at the Smithsonian.

Nearly every American schoolchild has seen the painting of Robert E. Lee’s surrender to Ulysses S. Grant at Appomattox. The image has graced the pages of American history textbooks for generations. The original 9’x12′ canvas is not at the Smithsonian, though. It doesn’t even belong to the Smithsonian. Rather, the painting belongs to the Galena Historical Society in Galena, Illinois and is on display at their Galena & U.S. Grant Museum.

On April 9, 1895, “Peace in Union” (no, it’s not called “Surrender at Appomattox”) was finished and signed by artist Thomas Nast. Nast was commissioned by Chicago newspaperman and former Galena resident Herman Kohlsaat to paint the historical event.

Nast was a German-born caricaturist and editorial cartoonist. He has been called the “Father of the American Cartoon” for creating the modern version of Santa Claus and the political symbol of the elephant for the Republican Party. His work also popularized the images of Uncle Sam, Columbia and the donkey of the Democratic Party.

Upon his commissioning, Nast began two years of intense research on the surrender and the people who were present. He read up on Grant’s generals to portray them as accurately as possible in his painting, and it shows. Some show relief in their tired faces for the end of the long and bloody war. Others show reverence for Grant and his leadership that brought the conflict to a close. Still others show contempt for Lee and his confederacy of rebels and traitors.

Of course, the focus of the painting is the exchange between Lee and Grant. Per his reputation, Lee changed into his best uniform for the surrender at the courthouse. Grant, fittingly, had on a worn jacket and scuffed boots straight from the battlefield. Aside from the significance of the event portrayed, details like these make “Peace in Union” one of the greatest works of art in American history.

Representatives from the Smithsonian have tried at least three times to convince the Galena Historical Society to sell the oil painting to them. Every visit to the small Illinois town has been unsuccessful though. No amount of money will allow the people of Galena to part with “Peace in Union.” Although Grant and his family lived in Galena for only a year before the start of the Civil War, he would consider it home for the remainder of his life and the town of Galena is extremely proud of that fact.

Along with this national treasure, the Galena & U.S. Grant Museum hosts other artifacts of American history. Another article from the Civil War, the museum houses the first Union flag raised over the courthouse of Vicksburg, Mississippi when the siege ended on July 4, 1863. Grant gave the honor of raising the flag to the men of the 45th Illinois who brought the flag home to Galena as a souvenir. Another flag in the museum is said to have been saved from the USS Lawrence at the Battle of Lake Erie during the War of 1812. It was reportedly given to Hezekiah Gear for his service in the war and brought to Galena when he moved there later in his life. To see these pieces alone, a trip to Galena is well worth your time.