5 of the most badass American naval quotes ever 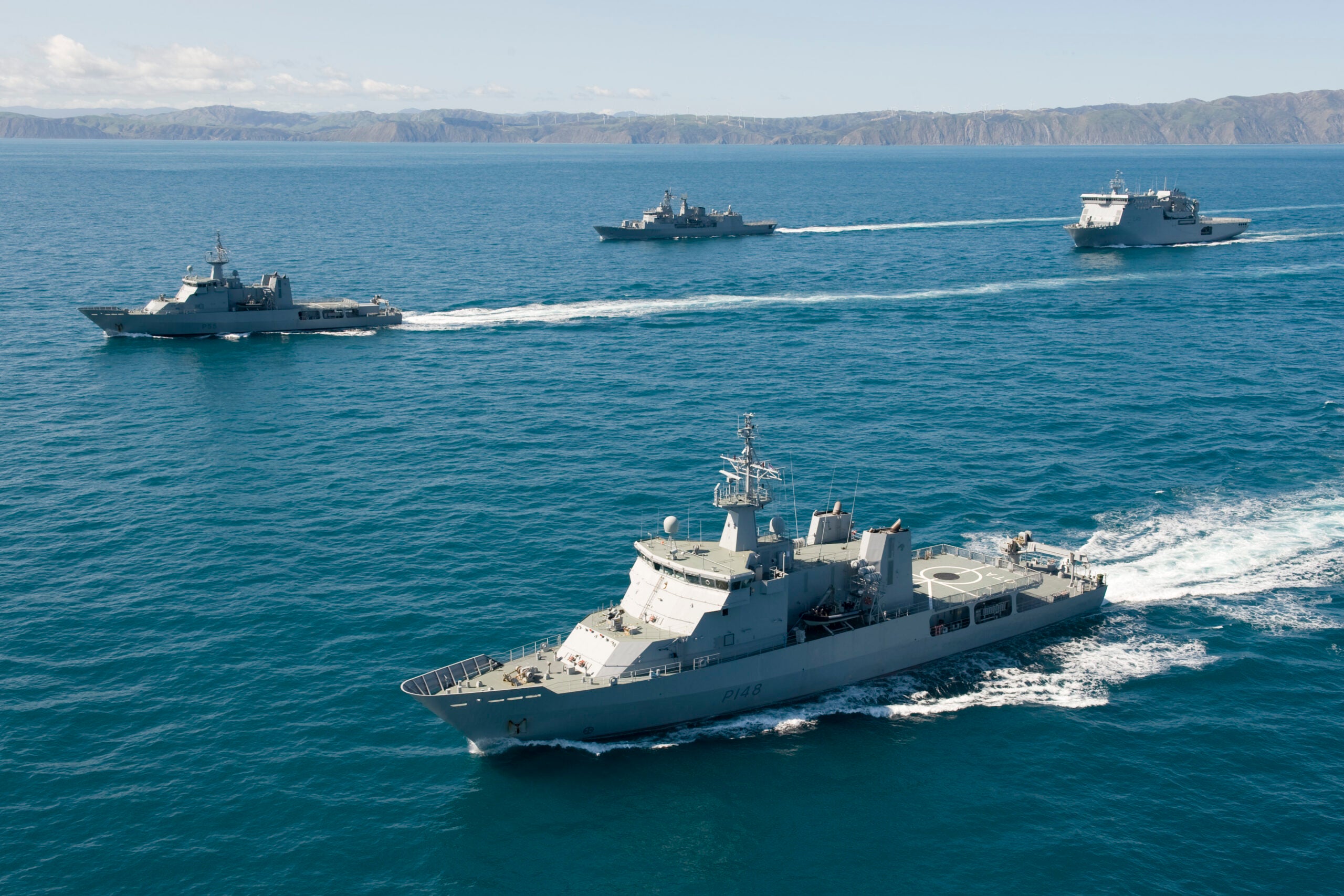 The strength of a nation is directly tied to its naval power and command of the seas. It was for this reason that an island nation like Great Britain was able to create such a vast empire and dominate so much of the world. Today, America follows this naval principle by maintaining freedom of maneuver and overwhelming superiority on the open sea. Since the nation’s birth, the U.S. Navy has fought in epic battles that have changed the course of history. From these events come some of the most badass Naval quotes that we can enjoy today.

This naval quote comes from none other than John Paul Jones. John Paul Jones was America’s first naval hero of the Revolutionary War and is considered the father of the American Navy. In 1779, Jones commanded the 42-gun Bonhomme Richard and led a squadron of five ships attacking British vessels around Ireland, Scotland, and northern England. On September 23, he encountered a large merchant convoy escorted by two British ships of the line. Bonhomme Richard engaged with HMS Serapis and her 50 guns.

Realizing he was outgunned and outmaneuvered with the wind dying, Jones made an effort to lock the ships together. With Serapis in a position of advantage, the British hailed the Americans and asked if they wished to surrender. “I have not yet begun to fight,” was Jones’ reply. Consider this the 18th century naval version of Captain America getting back up during a fight and saying that he could do this all day. Jones’ fighting spirit, and that of his crew, won the day. Though the Bonhomme Richard was lost in the fighting, Serapis was captured by Jones who was knighted by King Louis XVI of France for his valor.

Ever heard of Captain James Lawrence? You can thank him for this quote. During the War of 1812, Captain James Lawrence commanded USS Chesapeake against HMS Shannon in single combat. Chesapeake was quickly disabled by gunfire and Lawrence was mortally wounded. He issued his dying order, “Don’t give up the ship. Fight her till she sinks,” before he was carried below decks. Sadly, the crew was overwhelmed by a British boarding partly shortly thereafter and the ship was surrendered. After his valiant command and death, Lawrence’s words were taken up by his friend and fellow naval officer Captain Oliver Hazard Perry. Perry ordered a large blue battle ensign stitched in white with the phrase “DON’T GIVE UP THE SHIP” and flew it in the Battle of Lake Erie. During the battle, Perry’s flagship, USS Lawrence, was also named for his fallen comrade. At the onset of the battle, Perry fortuitously stated, “If a victory is to be gained, I will gain it.”

A badass quote on its own, Perry was a man on a bloodthirsty mission of revenge against the British. When the battle was won, Perry had the British come aboard his ship to surrender so that they could see the sweat and blood of his men. But, the cherry on top of Perry’s revenge sundae was the battle report that he sent to future president General William Henry Harrison. “We have met the enemy and they are ours; two ships, two brigs, one schooner and one sloop.” For all the fighting and passion that went into the battle, Perry was famously brief with his summary; casual like an action hero not looking back at an explosion.

3. “Damn the torpedoes…full speed ahead”

This hardcore quote comes from Admiral David Farragut, a Southern Unionist from Tennessee who opposed secession and the Confederacy at the outbreak of the Civil War. Though he was a veteran of the War of 1812 and the Mexican-American War, Farragut’s loyalty was still questioned because of his Southern roots. However, he was given command of the Union’s Gulf Blockading Squadron and captured the city and port of New Orleans in 1862. For this achievement, he was loyalty was solidified and he was promoted to Rear Admiral, becoming one of the the Navy’s first four active flag officers. On August 5, 1864, Farragut was given the task of taking Mobile, Alabama, the Confederacy’s last major port in the gulf. Though the bay was protected by torpedoes, as tethered naval mines were known then,

Farragut ordered his fleet to charge the bay. When USS Tecumseh struck a mine and sank, other ships halted their charge and turned away from the bay. When Farragut saw this, he called over to one of his ships, “What’s the trouble?” USS Brooklyn replied, “Torpedoes!” “Damn the torpedoes!” Farragut proclaimed and issued orders to continue the charge. “Four bells, Captain Drayton, go ahead. Jouett, full speed.” With the “Leroy Jenkins” type charge, the fleet burst through the defenses and into the bay where they destroyed the Confederate batteries and captured Mobile May. Today, Farragut’s quote is most often paraphrased to, “Damn the torpedoes, full speed ahead.”

4. “You may fire when you are ready, Gridley”

Some quotes are famous because they are linked to important historical events: “Et tu, Brute” with the death of Caesar which led to the end of the Roman Republic or “Molon labe” with the last stand of the 300 Spartans which gave rise to a united Greece against the Persian Empire. In modern history, it can be argued that Commodore George Dewey ushered in the age of American supremacy at the Battle of Manila Bay. Just after midnight on May 1, 1898, Dewey commanded the U.S. Asiatic Squadron through the Boca Brande Channel off the coast of the Philippine Island of Luzon. America was at war with Spain and Dewey was poised to strike a major blow to the Spanish fleet in Manila Bay. Dewey’s flagship, USS Olympia, was to fire the first rounds of the American attack. As dawn broke, Olympia‘s commander, Captain Charles Gridley, waited for his orders as Spanish shore batteries fired harmlessly at the out-ranged squadron. At 5:40 AM, Dewey gave his now-famous order, “You may fire when you are ready, Gridley.” The Spanish fleet was obliterated in the bay and the capital city of Manila was surrendered. This action signaled to the world that the centuries-old Spanish Empire had come to an end and that America had arrived as a major naval and world power.

5. “Praise the Lord and pass the ammunition”

Military chaplains play a major role in maintaining the morale and welfare of a unit. Regardless of religion, chaplains can motivate troops to push through hardship and win through to victory. Moreover, chaplains are prohibited from actively participating in combat. So, on December 7, 1941, Lt. JG, CHC Howell M. Forgy did everything he could to keep his fellow sailors in the fight. Like the other ships that were still fightable, New Orleans and her crew filled the skies above Pearl Harbor with anti-aircraft fire against the Japanese surprise attack. New Orleans didn’t have any electrical power during the attack, so ammunition had to be carried up from the magazines below decks. After some time, the sailors began to exhaust from the strenuous work. Lt. Edwin Woodhead was in charge of an ammunition line that fed the guns.

“I heard a voice behind me saying, ‘Praise the Lord and pass the ammunition,'” Woodhead recalled. “I turned and saw Chaplain Forgy walking toward me, along the line of men. He was patting them on the back and making that remark to cheer and keep them going. I know it helped me a lot, too.” With enemy bullets and bombs falling from the sky, here comes the chaplain telling you to praise God and keep the ammo moving. Forgy’s words of encouragement helped keep New Orleans in the fight and were later used in a patriotic war song. “Praise the Lord and Pass the Ammunition” was published in 1942 as a response to Pearl Harbor. The 1943 recording by Kay Kyser’s orchestra reached number 1. Gamers may recognize the tune from such titles as BioShock 2, Mafia II, and Fallout 76.