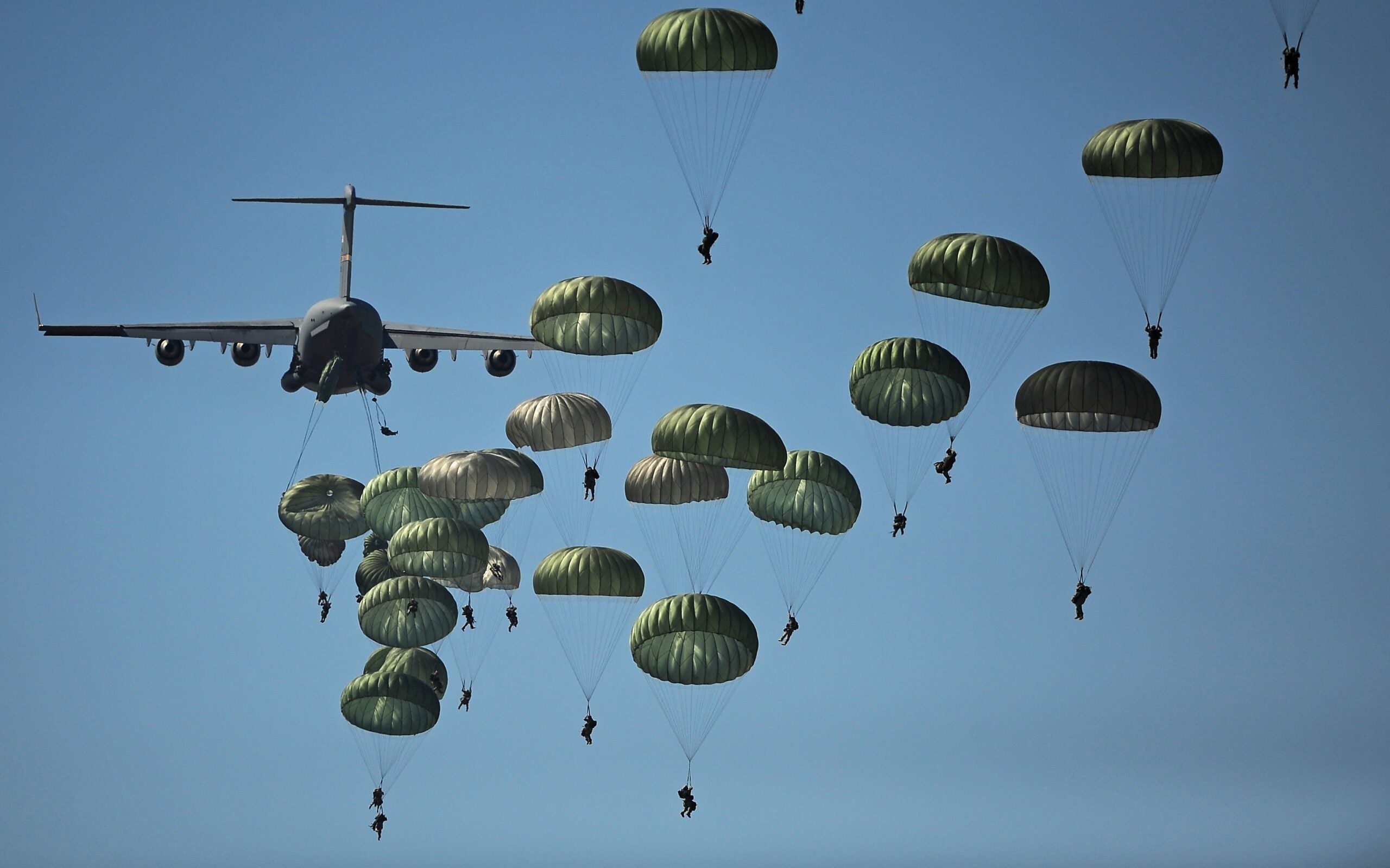 A military airborne operation is inherently risky. Parachutes can fail, troops can be scattered by the wind and Murphy can generally rear his ugly head and make anything and everything happen. In order to mitigate risk, airborne operations are meticulously planned and prepared for. Parachutes are packed by highly skilled riggers, pathfinders are sent ahead to mark drop zones, and weather forecasts are checked minute by minute before a jump. In the unlikely event that a trooper’s main chute does fail, a reserve chute is carried as a backup. After all, two is one and one is none. But what happens in case of a water landing?

Paratroopers can easily be loaded down with over 100 pounds of gear on a combat jump. If a trooper lands in deep water like a lake, the likelihood of drowning is extremely high with all that weight. Enter the parachutist flotation system.

Going as far back as 1951 with the B-7 Parachutist Life Preserver, a flotation device is a vital piece of life-saving equipment in airborne operations. As with everything in the military, there’s guidance dictating its use. Generally, flotation devices are a regulatory requirement for jumps where the surveyed drop zone is within 1000 meters of a water obstacle. Moreover, that water obstacle must be more than 2 meters deep.

Inflated with CO2 cartridges, the B-7 was also issued with sea dye markers to help spot waterborne paratroopers. Although it could save their lives, troops didn’t care much for the B-7. “[They were] extraordinarily uncomfortable to wear since they go on under the parachute harness and all the other equipment, to include the LBE/LBV,” one Sgt. Maj. recalled.

The B-7 was later joined by more advanced flotation devices like the Life Preserver LPU-10/P and Tactical Flotation Support System. The former is basically a slightly updated version of the B-7 that could be inflated orally if the CO2 cartridges failed. Conversely, the TFSS is a much more advanced flotation system. It comes in different forms like a cummerbund worn on the sides of a plate carrier or ballistic vest, or as two separate cells worn on either side of a belt. Luckily for military parachutists, the TFSS is much more comfortable to jump with that the old B-7.

In 2018, the Army began searching for a new flotation system to replace its inventory of flotation devices. The announcement by the Army’s Natick Soldier System Center stated that the legacy systems, “do not meet all of the Army’s requirements for intentional, and/or unintentional parachutist water entry.”

In 2021, the Army began testing the new Parachutist Flotation Device. Evaluated by paratroopers of the 82nd Airborne Division and 3rd Special Forces Group, the PFD is an even more modern iteration of the flotation device concept than the TFSS.

“The PFD is much easier to rig for static line operations,” said platoon sergeant and jumpmaster Sgt. 1st Class Steven Branch. “We barely noticed having it on, and it can easily suspend a Soldier with combat equipment for a long time if needed. Overall I was very impressed with every aspect of the PFD.”

Upon completion of its evaluation, the PFD will make its way across the Army’s airborne units and replace legacy flotation systems. Although their use is even rarer than reserve chutes, flotation devices are just as vital a piece of life-saving equipment that every paratrooper would rather have and not need than need and not have.