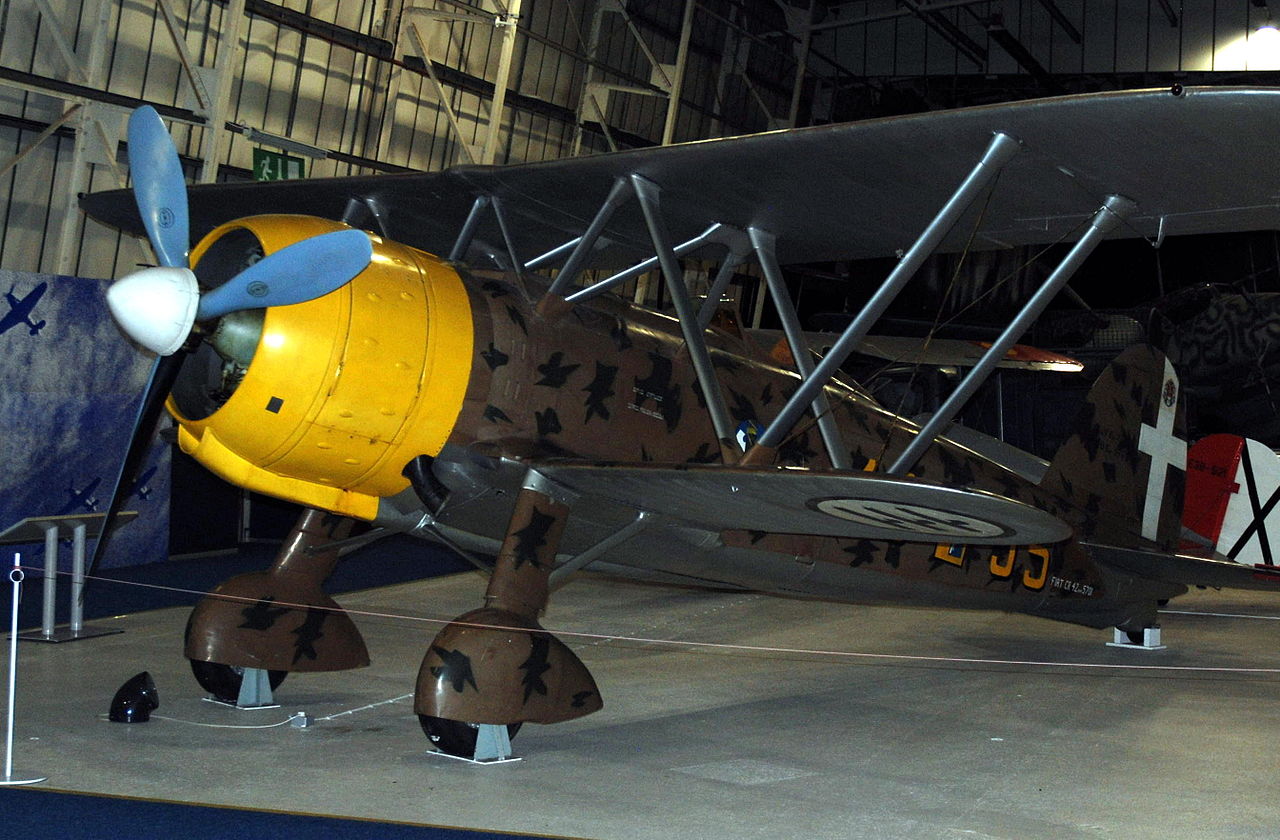 This aircraft (MM5701) was based in Belgium in th Autumn of 1940 as part of the Corpo Aereo Italiano, the Italian Air Force element involved in the Battle of Britain. On November 11th 1940 while on a escort mission over England, flown by Sergente Pietro Savadori, its engine overheated and the pilot made a forced landing on the shingle beach at Orford Ness, Suffolk. It was subsequently test flown by Captain Eric "Winkle" Brown who was impressed by its manoeuvrability noted that it was underarmed. (Wikimedia Commons).

If England had 200 pilots like Eric “Winkle” Brown, the German Luftwaffe of World War II would never have even attempted to go to war with the British. Brown had been flying since he was just eight years old, going up with his dad, a veteran of Britain World War I Royal Flying Corps.

He began his formal training in 1937, at 18 years old. His flying ability would change aviation forever, as he became a celebrated wartime pilot, test pilot and naval aviator.

Brown isn’t just the most decorated pilot in the history of the Royal Navy, he was one of the most accomplished and experienced pilots of his time. He not only holds the record for most take-offs and landings from seaborne aircraft carriers, he flew almost every type of aircraft available during his day, he flew the German Me163 rocket plane and the first mass-produced helicopter – after only reading the manual.

His war record is just as impressive, despite being an exchange student living in Germany when World War II was declared. In 1939, in the war’s first days, the British national was arrested by the SS and deported to Germany. If the Nazi stormtroopers had just shot him instead, it would have saved them a whole lot of trouble.

After arriving home in England, Brown joined the Royal Navy’s Fleet Air Arm aboard the HMS Audacity, an escort carrier. The posting gave Brown his first taste of air combat and the forum to display his cunning bravado behind the stick. It was as a pilot aboard Audacity that he scored his first two kills.

Brown was intercepting two German Focke-Wulf 200 Condor patrol aircraft when he decided to disregard maneuvering and fly head-on toward the incoming enemy. He shot down both of them and they never saw him coming. His next assignment saw him training Royal Canadian Air Force bomber crews and then escorting them on runs over occupied France.

He was then sent to fly captured Italian and German aircraft to determine their capabilities and weaknesses. Brown was able to fly 13 of them with minimal input beyond captured enemy documents. His next assignment was testing the combat capabilities of new Allied aircraft, which led him to becoming the first pilot to land a twin-engine plane on a carrier, and flying a transonic speeds in regular planes.

Brown assisted the U.S. Army Air Forces in developing the P-51 Mustang and adopting it for bomber escort duty, developing the first British jet aircraft, and was selected to fly as a test pilot for the UK’s postwar supersonic flight research project.

But before the war had ended, he landed perhaps his biggest achievement as an Allied airman: the surrender of 2,500 enemy troops and the capture of experimental German jet-powered bombers. British intelligence learned that a number of German Arado Ar-234 jet bombers had retreated to a base in Norway. They needed to capture those jets before the Red Army could arrive.

As British forces advanced on the base, Brown flew to the airfield and landed there, expecting it to have been captured by the British Army. The Germans had put up a bigger fight for the area than the British expected, so when Brown landed, it was still in enemy hands.

With the end of the war in sight, the German commander surrendered his base and its 2,500 personnel to Brown, who held command until the British force could arrive. The British took 12 of the new, advanced bombers back to England the next day.

Brown would go on to break numerous aviation records, including the highest number of different aircraft. He died in 106, aged 97 years.