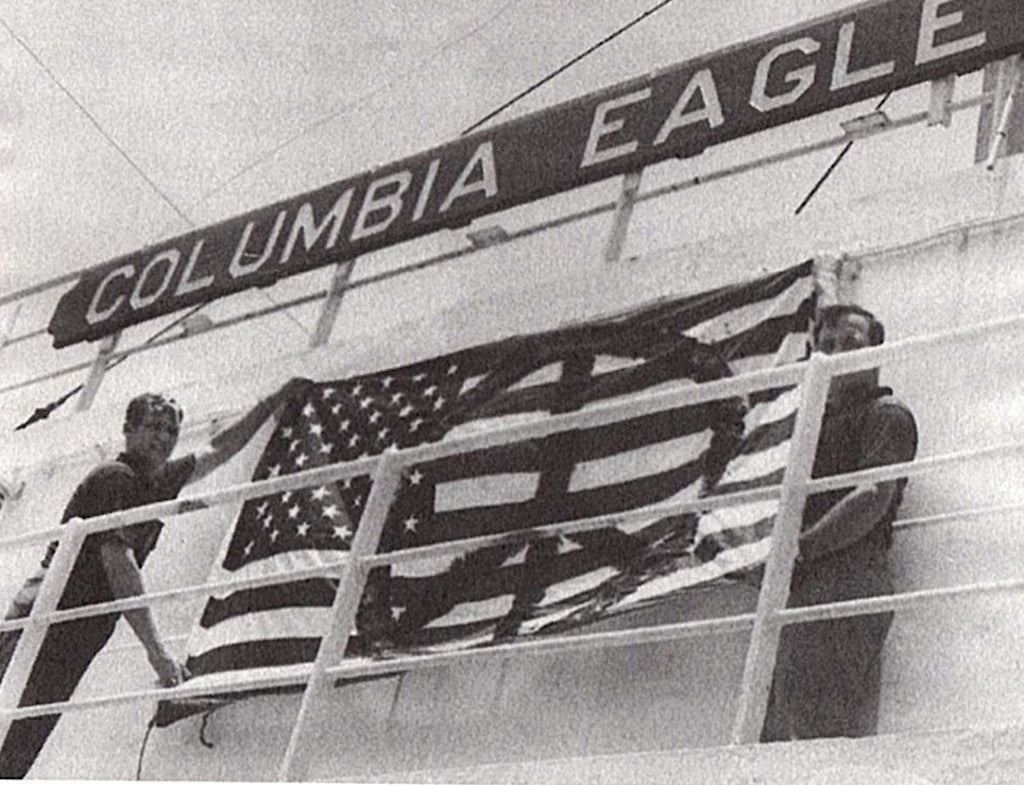 On March 14, 1970, the SS Columbia Eagle was on its way to South Vietnam. The United States had been waging a war against the Communist North Vietnam, to support the fledgling non-Communist government in the south. The troops fighting there needed weapons and bombs to keep up the fight.

The Columbia Eagle was set to deliver those critical munitions. Crewed by American Merchant Mariners, the vessel was carrying out a contract to deliver 1,750 tons of ammo, napalm, and other kinds of various bombs and missiles to American forces in Thailand. Two of the ship’s crew were determined to go elsewhere – and their mutiny was the only one on any American ship in the past century.

Clyde McKay was a native of Hemet, California. His friend Alvin Glatkowski was from Augusta, Georgia. Both men came from military families and abusive backgrounds, and both sought new lives in the Merchant Marine. McKay joined in 1963 and Glatkowski in 1967. It was apparently not the kind of life they expected for themselves, and began planning something extraordinary to get out of it.

Despite being fully aware that they were not only risking their lives, but risking a lifetime in jail, they made little plans for the mutiny beyond bringing guns aboard the ship. Their only other plans included minimizing the number of crewmembers aboard the ship and starting the mutiny directly after the Columbia Eagle reported its location for the day.

That day was March 14, 1970. After the ship reported its location, the two men pulled the ship’s fire alarm, knowing the rest of the crew would follow fire protocols. As the other men took their places in the lifeboats, McKay and Glatkowski took the skipper hostage.

They told the captain they had smuggled a bomb aboard and forced him to order the cutaway of the lifeboats, leaving 24 crew members adrift in the ocean. The vessel was carrying 3,500 500-pound bombs and 1,225 750-pound bombs, so the captain was not willing to risk the lives of everyone in the area, and ordered the boats dropped.

Luckily for the adrift crewmen, the proximity to the Columbia Eagle’s last known location would ensure their rescue. Unfortunately for the mutineers, it also signaled an SOS to U-Tapao Royal Thai Navy Airfield. The mutiny was discovered and the ship’s movements were now being closely watched.

With only 13 crewmen left on board, the ship sailed for Cambodian territorial waters, dropped anchor and requested asylum. Prince Norodom Sihanouk accepted while all the American Navy could do was sit outside the territory and watch. The mutineers luck wouldn’t hold for very long, however.

Four days later the prince was deposed in a pro-American coup. Once welcomed in Cambodia, McKay and Glatkowski were arrested and held for months. They were charged in absentia with mutiny, kidnapping, and assault.

Glatkowski was eventually released by Cambodia and sought asylum at the Soviet and Chinese embassies in Phnom Penh. Both refused his request, so he gave himself up at the U.S. embassy. Shortly after, he was returned to the United States to face the charges. He pled guilty and was sentenced to ten years, but served seven.

McKay escaped from his Cambodian prison and tried to join the Khmer Rouge, the Cambodian communist party who would come to power in 1975 and implement a reign of terror and death on the Cambodian people. He was never seen again.