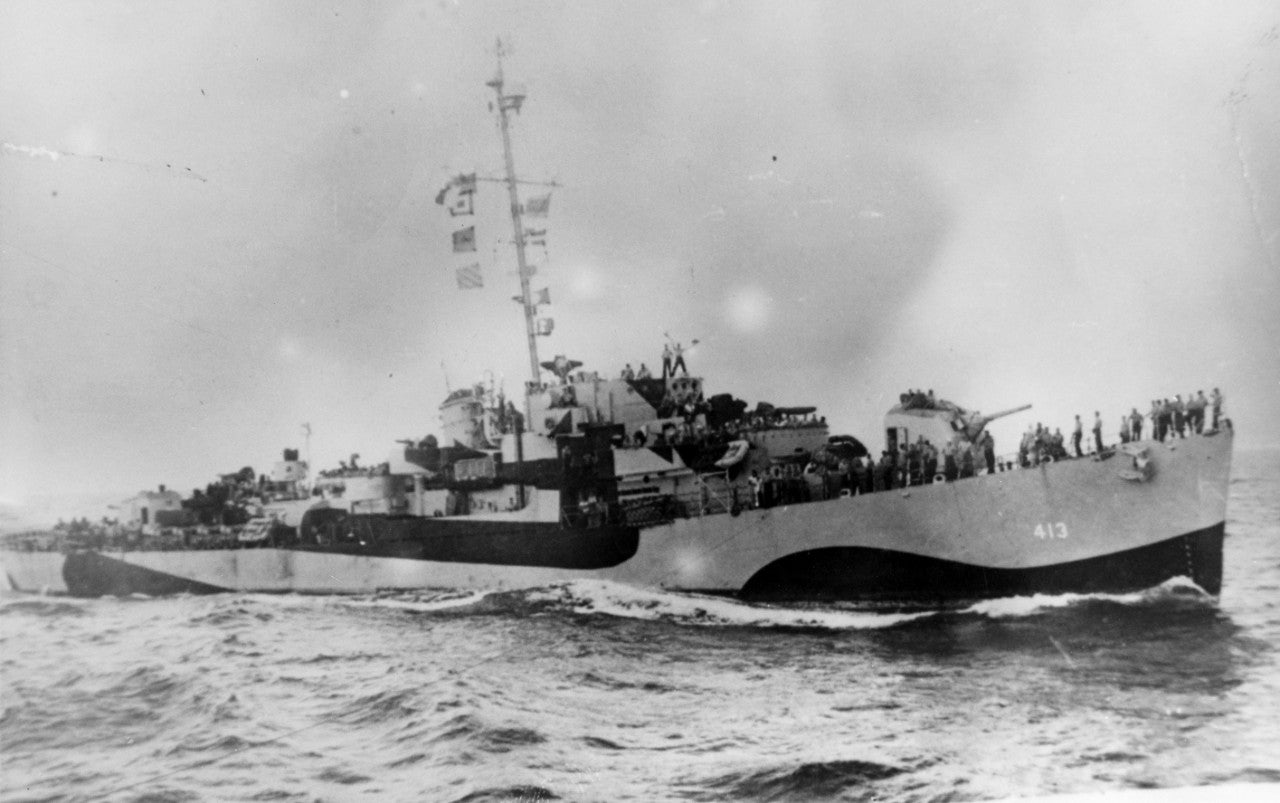 Full-sized destroyers during WWII had to keep up with capital ships like fleet aircraft carriers and cruisers. They also had to be sufficiently armed in order to protect formations from enemy attack. Smaller destroyer escorts, which were generally assigned to protect slow convoys, were slower and more lightly armed. However, this disadvantage didn’t prevent the USS Samuel B. Roberts (DE-413) from fighting like a battleship and taking on a 23-ship Japanese Task Force, including cruisers and battleships.

Samuel B. Roberts was a John C. Butler-class destroyer escort that was commissioned on April 28, 1944. Armed with just two 5-inch guns and a single torpedo tube, she was not equipped to take on bigger warships in direct combat. However, on October 25, 1944, that’s exactly what she did.

Samuel B. Roberts was part of a light flotilla of destroyers, destroyer escorts, and escort carriers designated Taffy 3. The group was off the coast of Samar Island in the Philippines when the Japanese Center Force appeared on the horizon and opened fire. The Japanese ships were en route to destroy the American landing at Leyte and the U.S. Third Fleet had been lured away chasing Japan’s last aircraft carriers. Taffy 3 was all that stood between the American invasion force and the Japanese ships.

At 7:35AM, Samuel B. Roberts set course for a torpedo attack against the Japanese heavy cruiser Chōkai. The ship’s commanding officer, Lieutenant Commander Robert W. Copeland, announced to the crew, “We’re making a torpedo run. The outcome is doubtful, but we will do our duty.” Deploying smoke to cover the attack, Samuel B. Roberts steamed to within 2.5 nautical miles of the Japanese ship, dodging heavy fire from the cruiser’s 8-inch guns.

The daring charge worked as Samuel B. Roberts was so close that Chōkai could not depress her guns low enough to continue firing on the destroyer escort. A shell hit the mast and jammed the torpedo mount. However, it was repaired and Samuel B. Roberts fired three torpedos. One struck Chōkai and blew off her stern. Now in the midst of the Japanese formation, Samuel B. Roberts spent the next hour weaving between enemy ships and blasting away with her guns.

During her heroic attack, Samuel B. Roberts fired over 600 shells from her 5-inch guns. Her two twin 40mm and ten 20mm anti-aircraft guns were also used to blast away at the Japanese ships at close range. At 8:51AM, two shells struck the destroyer escort, one of which damaged the aft 5-inch gun. Soon after, the gun suffered a breech explosion that killed and wounded several crew members. With just one main gun, Samuel B. Roberts kept fighting and managed to set the bridge of the Japanese heavy cruiser Chikuma on fire and destroy her Number 3 gun turret.

Unfortunately, Samuel B. Roberts ended up in the sights of the battleship Kongō. Three massive 14-inch shells struck the destroyer escort and ripped a hole 40 feet long and 10 feet wide on the port side of the aft engine room. Taking on water, the order to abandon ship was given at 9:35AM. Samuel B. Roberts sank 30 minutes later with 90 of crew. The 120 survivors floated in three life rafts for 50 hours before they were rescued.

The bravery of Samuel B. Roberts‘ crew and the rest of Taffy 3 turned back the Japanese Center Force, whose commander was convinced he encountered the Third Fleet after witnessing the daring charges. The destroyer USS Johnston (DD-557) was another hero ship that charged the Japanese off Samar and was sunk. Her wreck was discovered in 2019 and dived in 2021, becoming the deepest shipwreck ever surveyed. That is, until the wreck of the Samuel B. Roberts was found.

On June 18, 2022, the submersible Limiting Factor located Samuel B. Roberts‘ torpedo rack. Victor Vescovo, the ocean explorer and former U.S. Navy officer who made the dive to the Johnston, later piloted the submersible to the wreck at a depth of 6,895 meters. This made Samuel B. Roberts the deepest shipwreck ever located and surveyed, surpassing Vescovo’s previous record of 6,456 meters with the Johnston.

Vescovo tweeted about his finds on the historic dive. “It appears her bow hit the seafloor with some force, causing some buckling,” he wrote. “Her stern also separated about 5 meters on impact, but the whole wreck was together.” Following his successes with Johnston and Samuel B. Roberts, Vescovo hopes to locate and survey the wrecks of USS Hoel (DD-533) and USS Gambier Bay (CVE-73), two other American ships sunk during the Battle off Samar.