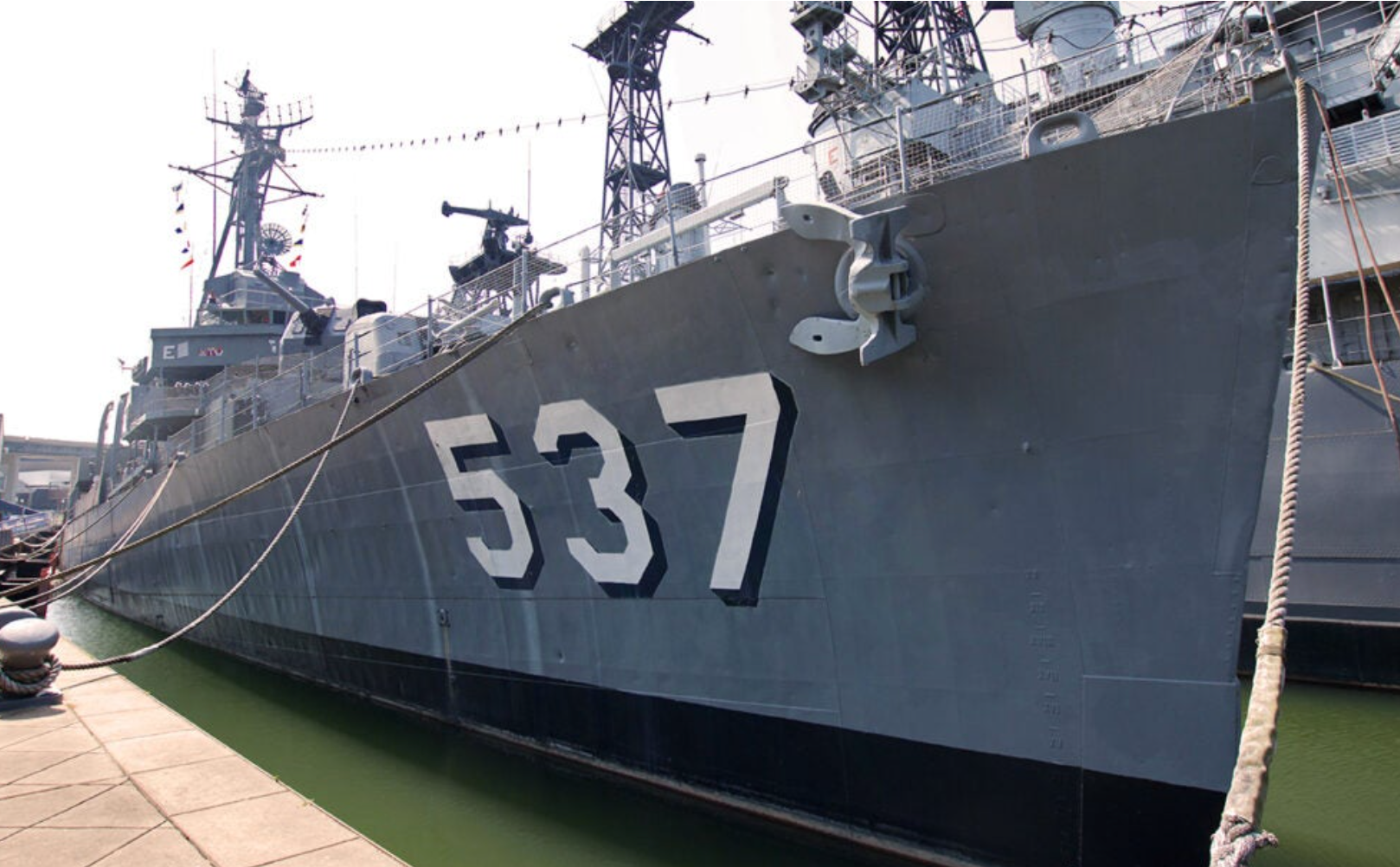 On November 13, 1942, the light cruiser USS Juneau (CL-52) was sunk by a Japanese submarine during the Battle of Guadalcanal. 687 men were killed including the five Sullivan brothers: George, Francis, Joseph, Madison, and Albert. The Sullivans, ranging in age from 20 to 27, joined the Navy shortly after Pearl Harbor on the condition that they all serve together. The tragic story of the Sullivan brothers partially inspired the plot of Saving Private Ryan. Moreover, the Navy named a Fletcher-class destroyer in honor of the Sullivans, the first US Navy ship that honored more than one person.

USS The Sullivans (DD-537) was commissioned on September 30, 1943, and was sponsored and launched by the mother of the five Sullivan brothers, Mrs. Alleta Sullivan. Following a shakedown cruise, The Sullivans headed for the war in the Pacific on December 23. Armed with the latest radar and a powerful suite of anti-aircraft weapons, the ship screened for aircraft carriers against deadly kamikaze attacks and saw action from the Battle of Kwajalein to Okinawa. She returned to the United States on July 9, 1945 for an overhaul and was decommissioned the next year.

In May 1951, The Sullivans began the process of reactivation in response to the Korean War. On October 11, 1952, she joined Task Force 77 off the eastern coast of Korea screening for fast carriers and providing naval gunfire support for UN ground forces. The Sullivans served in this capacity, only returning to Japan to refit, until she was ordered home on January 26, 1953. The ship continued her service in the Mediterranean and Caribbean through the 1950s.

In October 1962, The Sullivans joined the naval blockade of Cuba during the Cuban Missile Crisis. On April 1, 1964, she was transferred to the Naval Reserve Force and was ultimately decommissioned on January 7, 1965. The Sullivans earned a total of 11 battle stars, nine during WWII and two during Korea. In 1977, The Sullivans and USS Little Rock (CG-4) were donated to the Buffalo and Erie County Naval & Military Park in Buffalo, New York to serve as memorial and museum ships.

USS The Sullivans was declared a National Historic Landmark in 1986. However, on February 26, 2021, the ship began taking on water and listing. It was reported that her age and possible weather damage compromised the ship’s hull. Donations were solicited to save The Sullivans and perform long-term repairs. Over $1 million was raised and work was performed on the ship until October when the water became too cold to continue. Repairs were scheduled to resume on April 18, 2022.

However, on the evening of April 13, it was discovered that the ship was taking on a large amount of water and was listing. By the next day, the Coast Guard estimated that the historic ship had taken on over 3 million gallons of water. The Buffalo and Erie County Naval & Military Park began pumping operations to save The Sullivans and the ship slowly started to right itself. Divers were sent into the water to assess the hull compromise but were pulled out shortly thereafter due to the cold temperature and poor visibility. The Sullivans is moored right next to Little Rock making diving conditions hazardous.

Despite the setback, there is confidence that The Sullivans will survive. “We’ve got some work to do. We are committed to making sure that she’s fixed. This [ship] is not going to go down,” said Buffalo and Erie County Naval & Military Park President and CEO Paul Marzello during a press conference at the park. “We’ve had a lot of inspirational messages from people around the country and other countries, and we just want to let people know this is a setback. This ship will rise again, and failure is not an option.”