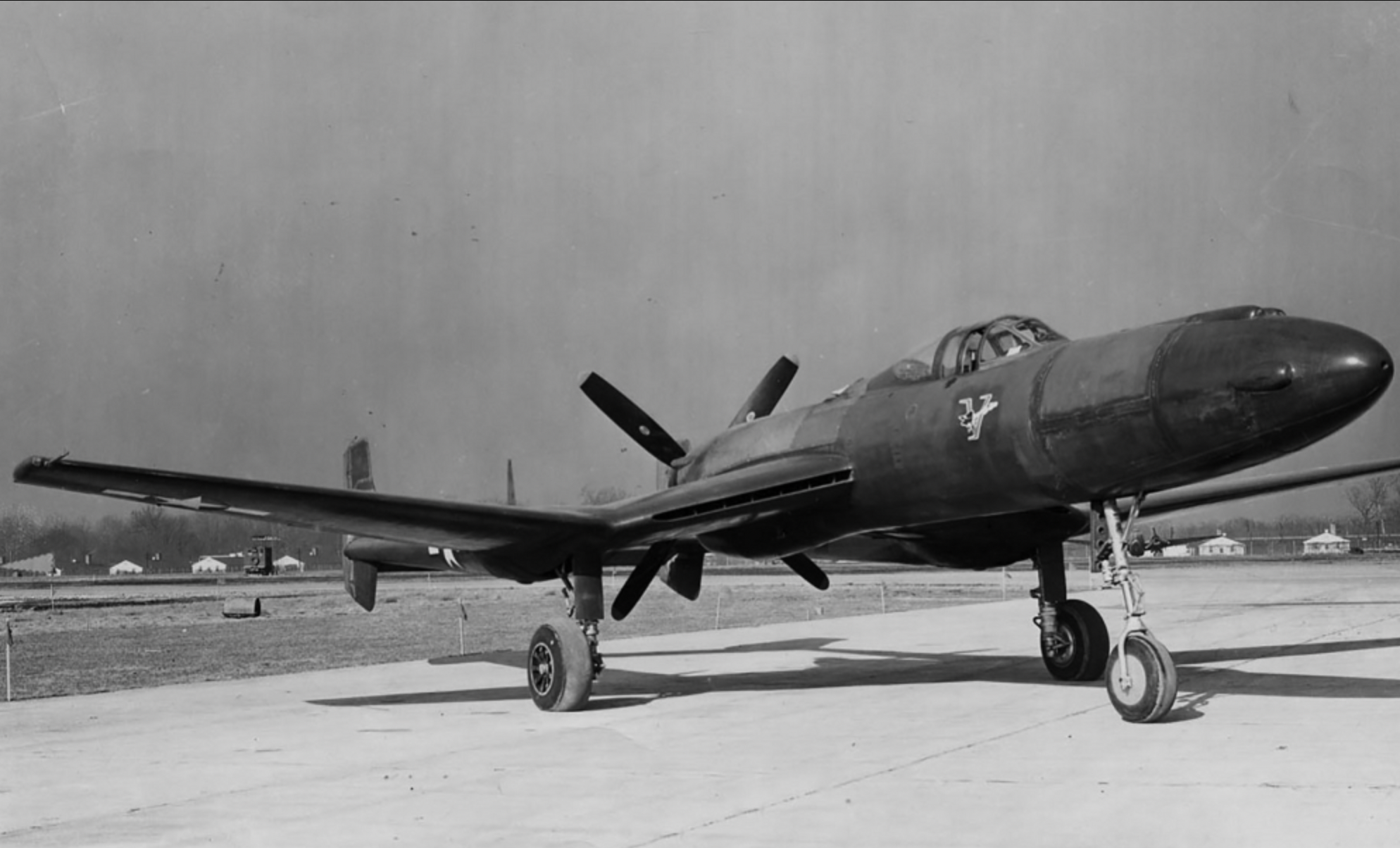 On November 27, 1939, the U.S. Army Air Corps issued Request for Data R-40C. The proposal challenged aircraft manufacturers to think outside the box and design a radial and unconventional new bomber hunter. With bombers of the time flying higher, faster, and carrying more defensive armament, the Army Air Corps wanted to see what engineers could come up to counter them.

The basic requirement was for a single-engine, single-seat fighter armed with at least four guns. It had to be able to operate from a 3,000-foot grass field surrounded by 50-foot obstacles and fly at least 425 mph at an altitude of 15,000 feet. Otherwise, designers were largely left to their imaginations to come up with the ideal bomber hunter.

The Northrop Corporation began work on the XP-56 on June 22, 1940. Its design was derived from a 1939 model, designated the N2B, which utilized a pusher configuration engine driving contra-rotating propellers. Following a review of the design, the Army ordered a prototype XP-56 on September 26, 1940. With war on the horizon, Northrop forecasted aluminum shortages and built the aircraft with a magnesium alloy for the airframe and skin. The XP-56 was armed with two .50 caliber machine guns and two 20mm cannons.

The first engine runs were conducted in March 1943, but engine problems led to delays. Further tests in April revealed aerodynamic instability problems which led to design changes. The prototype aircraft was destroyed on October 8, 1943 when a tire blew out during a high-speed taxi. A second prototype was completed in January 1944 and incorporated redesigns to make it more stable. It first flew on March 23, 1944 and underwent 10 test flights. The XP-56 was found to be tail-heavy, fuel-hungry, and lacking in power. Further flight testing ceased after the aircraft was deemed too hazardous and the project was canceled after a year of inactivity and the dawn of the jet age. The surviving prototype is preserved in the Smithsonian’s collection.

In June 1940, the Curtiss-Wright Corporation was awarded a contract by the Army for preliminary engineering data and a powered wind tunnel model of what would later be designated the XP-55. Designs called for it to be armed with two .50 caliber machine guns and two 20mm cannons, though this was later changed to four .50 caliber machine guns. In July 1942, the Army Air Force ordered three prototypes. The first XP-55 was completed on July 13, 1943. It made its first flight six days later at Scott Field, Illinois. The takeoff run was found to be too long and changes were made to the aircraft.

On November 15, 1943, the XP-55 underwent a stall test during which it inverted into an uncontrollable descent. The pilot was unable to recover the aircraft and bailed out safely, but the prototype was destroyed. Although the XP-55 incorporated a patented propeller jettison lever to prevent the pilot from hitting the rear-mounted propeller during a bailout, it does not appear to have been used during the mishap. The second prototype was similar to the first and flew on January 9, 1944. A third prototype first flew on April 25, 1944. It featured changes that improved stall characteristics that were later incorporated on the second prototype. The third prototype was lost during a mishap at a War Bond Air Show that killed the pilot and four civilians. This, combined with test results showing the XP-55 to be inferior to conventional fighters, led to the project’s cancelation. The second prototype is part of the Smithsonian collection and is on display at the Air Zoo in Kalamazoo, Michigan.

The XP-54 was the Vultee Aircraft Company’s response to the Army’s request. Distinguishing itself from the Northrop and Curtiss-Wright proposals, the XP-54 actually won the competition. A prototype was ordered on January 8, 1941 with a second on March 17, 1942. Like the XP-55 and XP-56, the XP-54 was driven by a rear-mounted engine and a push propeller. To operate as a high-altitude bomber hunter, the aircraft was designed with a pressurized cockpit. Entry was accomplished by electrically lowering the pilot’s seat to the ground before raising back up into the cockpit. Ejection was likewise performed downwards, allowing for the pilot to safely clear the rear-mounted propellor during a bailout.

To better accomplish it mission as a bomber hunter, the XP-54’s nose section could be vertically rotated. Two 37mm cannons were carried in rigid mounts while two .50 caliber machine guns were in moveable mounts. The nose and machine guns were controlled by a special gun sight that allowed the XP-54 to shoot at an elevated trajectory without altering its flight attitude. Its large nose section also gave the aircraft its nickname. Flight tests began on January 15, 1943. However, engine acquisition issues led to projected delays and cost overruns that ultimately resulted in the XP-54’s cancelation.