How the British made a jet-powered, flying boat fighter plane - We Are The Mighty

How the British made a jet-powered, flying boat fighter plane 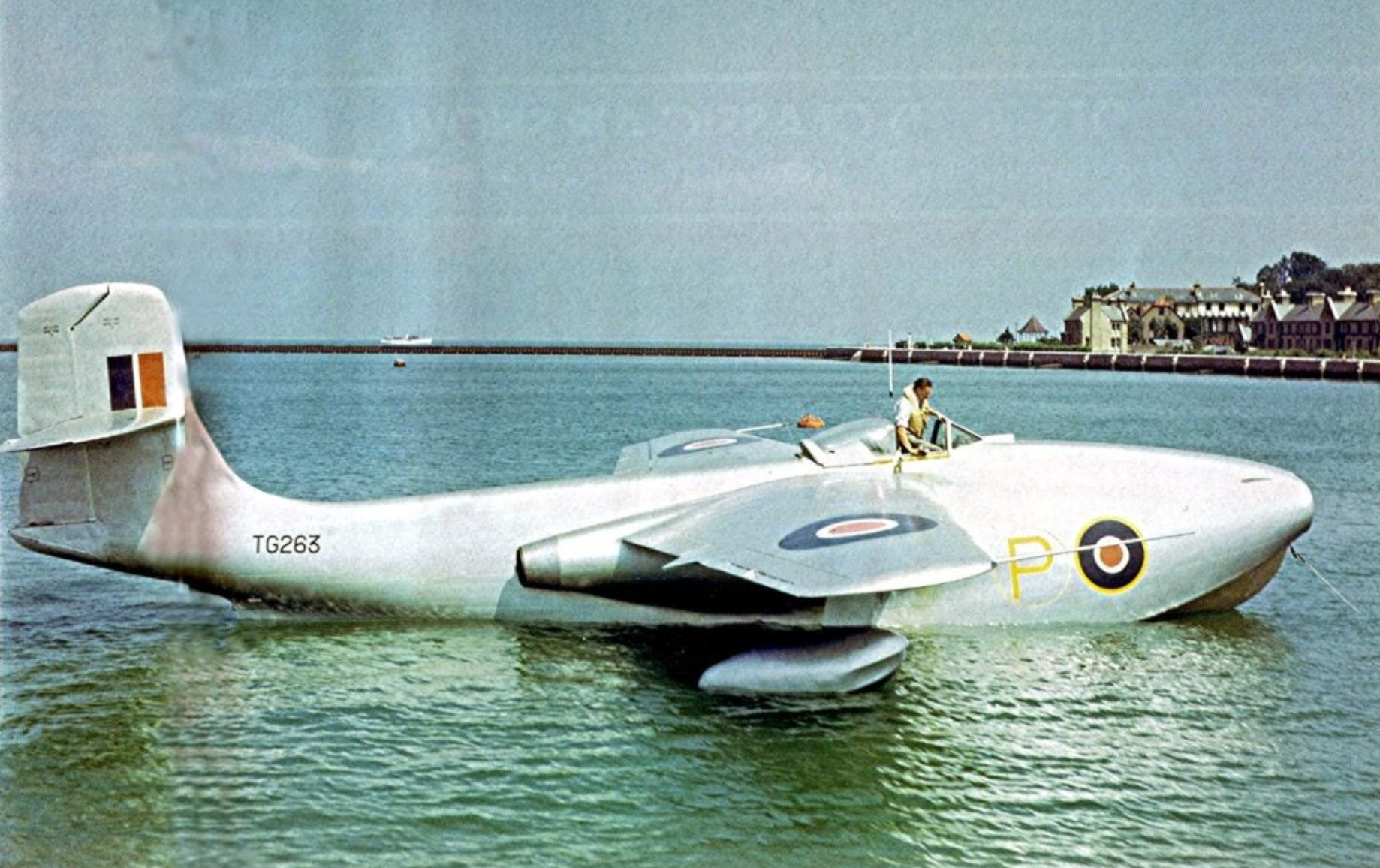 When people think of seaplanes, large propeller-driven aircraft are generally what come to mind. Multi-engined planes like the PBY-5A Catalina and the BV 238 came to define the class. However, seaplanes also came in the form of fighter aircraft like the OS2U Kingfisher and A6M2-N Rufe based on the A6M Zero. Moreover, flying boats persisted into the jet age with the Navy’s P6M SeaMaster. Notably, the first jet-powered water-based aircraft was an attempt at creating a flying boat jet fighter.

Although their accomplishments are not as widely publicized, seaplane fighters proved to be quite effective during WWII. The Imperial Japanese Navy used them extensively in the Pacific. Able to operate from small coastal bases, seaplane fighters were not dependent on airfields or aircraft carriers. Their operational flexibility came with a performance tradeoff in the form of their bulky floats, but Japanese seaplane fighters were still a deadly threat to allied forces.

Looking to advance the seaplane fighter design, British manufacturer Saunders-Roe sought to build a more capable aircraft using jet technology. Without a propeller, the aircraft could sit lower in the water and use a hull-type fuselage. By omitting the floats, a jet-powered seaplane could be both faster and more maneuverable than a conventional land-based propeller-powered fighter. Saunders-Roe, an established seaplane builder, also touted the logistical flexibility of seaplanes which could operate from virtually any body of water. This advantage was magnified with the proposed jet seaplane since early jet aircraft had extremely limited range due to their high fuel consumption.

Although the British Air Ministry had little interest in seaplane fighters during WWII, Saunders-Roe designed a concept designated SR.44 and presented it in mid-1943. Ministry officials were skeptical of the concept’s ability to operate at high altitude and Sauders-Roe modified and refined the concept. In April 1944, the Air Ministry issued a specification in response to the modified design and awarded a development contract for three aircraft to Saunders-Roe the next month.

The seaplane jet fighter, designated SR.A/1, was intended for use in the Pacific. Japanese resistance continued to hamper Allied progress, so the project was initially given top priority. However, with the end of the war in August 1945, Saunders-Roe refocused its efforts to civilian flying boat projects. As a result, the first SR.A/1 prototype made its maiden flight years on July 16, 1947. The initial flight went so well that, barely two weeks later, the fifth flight was made in front of military officials. These flights revealed that the aircraft had good performance and handling.

However, during the testing and evaluation phase, two of the three SR.A/1 prototypes suffered accidents. This caused an interruption in the testing and resulted in modifications to the third aircraft. In an effort to improve safety, the SR.A/1 was fitted with the first production Martin-Baker ejection seat. The seaplane was also equipped with an automatic mooring system that allowed the pilot to moor the aircraft without any external aid or even having to leave the cockpit.

Despite the improvements, the need for a seaplane jet fighter simply wasn’t there. Aircraft carriers had proved their ability to project air power during the war and escort vessels demonstrated their ability to protect carriers. With the loss of interest from the Air Ministry, Saunders-Roe put the project on hold and the surviving prototype SR.A/1 was placed in storage in early 1950. Later that year, in November, interest in the program was revived. The outbreak of the Korean War brought Britain and the United States to reexamine the seaplane jet fighter. However, it was soon realized that the concept was obsolete when compared with the rapidly advancing jet fighters of the day and the project was finally cancelled.

In June 1951, the surviving Saunder-Roe SR.A/1 prototype flew for the last time. Today, it is on display at the Solent Sky Museum in Southampton, UK.