These are the other two Globemaster cargo planes 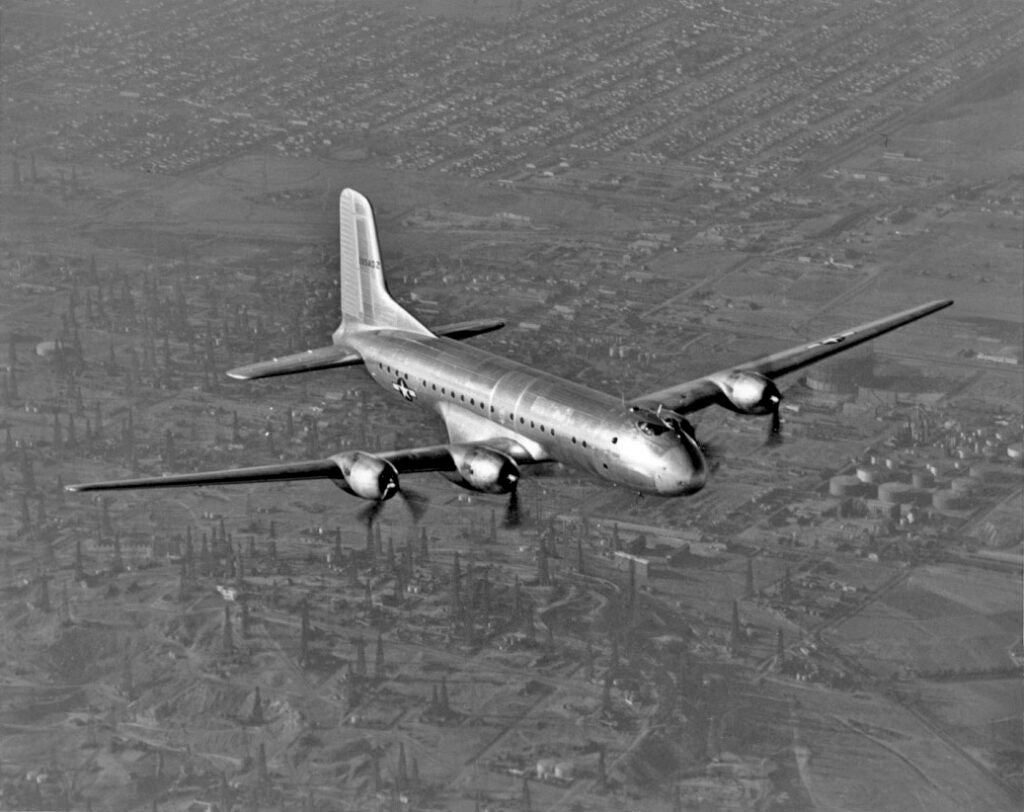 The Boeing C-17A Globemaster III gained international fame during the 2021 evacuation of Afghanistan. Air Force crews flew the cargo planes nearly nonstop out of Hamid Karzai International Airport in Kabul, with one flight evacuating over 800 people. Rated to carry 134 paratroopers, the Globemaster III has proven itself to be an extremely capable aircraft. Nicknamed the Moose, the C-17 is notably the third in a line of cargo planes bearing the Globemaster name.

The first aircraft named Globemaster was the Douglas C-74. Developed after the attack on Pearl Harbor, the C-74 was designed as a transoceanic heavy-lift aircraft. R&D began in early 1942 at Douglas Aircraft’s Santa Monica division. Given the heavy-lift requirements of the military, the engineers approached the aircraft with a no-frills mentality. They focused on building a large plane with enough power and lift to accommodate light tanks, 105mm howitzers, their towing vehicles, bulldozers and jeeps.

Due to the rushed nature of the wartime acquisition, no prototype aircraft were built. However, the development and production modification issues that resulted from building such a revolutionary aircraft at the time still delayed production. In the end, the C-74 would not see its first flight until September 5, 1945. Production was stopped after V-J Day and the contract was cancelled with just 14 aircraft produced.

In 1947, the Globemaster was declared operational and flew humanitarian missions including flood relief in Florida and hurricane recovery for other southeastern states. A single Globemaster also participated in the Berlin Airlift. The C-74 landed in the British sector of Berlin carrying 20 tons of flour. Over six weeks, the aircraft flew another 24 missions into the city and delivered 1,234,000 pounds of supplies. The plane’s crew set several airlift records including flying a total of 20 hours during a 24-hour period.

The C-74’s participation in the Berlin Airlift was reportedly cut short by a Soviet protest that the massive aircraft could be used as a bomber. Additionally, the Berlin runways were not rated for the Globemaster’s size and weight, and it was difficult to schedule the C-74 amongst the other allied aircraft. As a result, the Globemaster was reassigned to carry C-54 engines and parts to Europe from the U.S. With so few C-74s built and the introduction of its replacement in 1950, the Air Force retired the Globemaster in 1959. Aircraft sold to the civilian market flew for another 10 years.

Douglas actually converted the fifth C-74 that it built into the prototype for its replacement. Dubbed the C-124 Globemaster II, it used the same wing as the original Globemaster, but featured an even larger fuselage. The Globemaster II’s design was heavily influenced by the lessons learned during the Berlin Airlift. It had two large clamshell doors and a hydraulic ramp in its nose as well as a cargo elevator under the aft fuselage to make loading and unloading more efficient. The Globemaster II also boasted an increased capacity of 200 troops or up to 74,000 pounds of cargo.

With its huge carrying capability, the C-124 became the Air Force’s primary heavylifter during the Korean War and on through the Vietnam War. It was the only aircraft of its time capable of carrying fully assembled heavy equipment like tanks and bulldozers. The Globemaster II also supported supply operations for Operation Deep Freeze in Antarctica and transported PGM-17 Thor ballistic missiles across the Atlantic. The C-124 was eventually transitioned to the Air Force Reserves and Air National Guard following the introduction of the C-5A Galaxy in 1970. The last Globemaster II was retired in 1974.

McDonnell Douglas revived the Globemaster name for the C-17 when it was introduced in 1995. The company later merged with Boeing in 1997 and carries on the legacy of the Globemaster.