This Navy base is bigger than Rhode Island 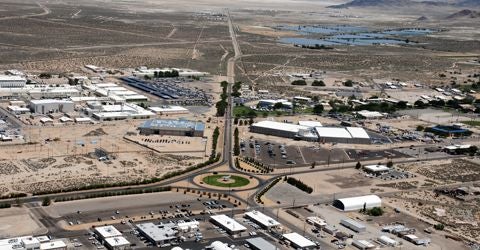 During WWII, scientists at the California Institute of Technology needed adequate facilities to test and evaluate their rockets. Simultaneously, the U.S. Navy was seeking a new proving ground for aviation ordnance. Cal Tech’s Dr. Charles C. Lauritsen and Navy Cdr. Sherman E. Burroughs met and agreed to work together to find a site that would suit both of their organizations’ needs.

Approximately 150 miles north of Los Angeles in the West Mojave Desert lies China Lake. The dry lake is named for the Chinese prospectors who harvested borax from the lake bed. With plenty of open land far from towns and cities, China Lake was the test site that Cal Tech and the Navy were looking for.

In November 1943, the Navy established the Naval Ordnance Test Station at China Lake. The Secretary of the Navy described NOTS as, “…a station having for its primary function the research, development and testing of weapons, and having additional function of furnishing primary training in the use of such weapons.” Testing at NOTS began within a month of its establishment. With its near perfect, year-round flying weather and practically unlimited visibility, China Lake quickly became the premiere location for weapons research, development, testing and evaluation. Moreover, the Navy’s partnership with Cal Tech established and fostered a relationship between military and civilian scientists and engineers that continues to this day.

In 1950, NOTS developed the Air Intercept Missile 9. Better known as the AIM-9 Sidewinder, the missile has become the world’s most used and copied air-to-air missile. Other notable weapons that were developed and/or tested at China Lake include the Mighty Mouse, Zuni, Shrike and JDAM.

In July 1967, NOTS China Lake was combined with the Naval Ordnance Laboratory in Corona, California, to become the Naval Weapons Center. By 1971, the Corona facilities were shut and relocated to China Lake. In July 1979, China Lake also assumed the mission of the National Parachute Test Range at El Centro.

In January 1992, NOTS China Lake was redesignated Naval Air Weapons Station China Lake. In total, the installation covers over 1,100,000 acres of land. Representing 38% of the Navy’s global land holdings, the base is larger than the state of Rhode Island. As of 2010, at least 95% of the land remains undeveloped. Additionally, China Lake’s restricted and controlled airspace covers 19,600 square miles. This accounts for 12% of California’s total airspace.

On top if its research, testing and evaluation roles, China Lake is also home to a National Historic Landmark. The Native American Cosco People who once inhabited the land carved thousands of petroglyphs into what are known today as Big and Little Petroglyph Canyons and sit within China Lake. They are part of the larger Cosco Rock Art District which contains more than 50,000 documented petroglyphs in an area of roughly 99 square miles, the highest concentration of petroglyphs in the northern hemisphere.

Today, the Navy reports that China Lake hosts 620 service members, 4,100 full-time civilians and 1,734 on-board and off-site contractors. The base continues to support the Navy’s research, testing and evaluation of cutting-edge weapons to equip the nation’s warfighters.