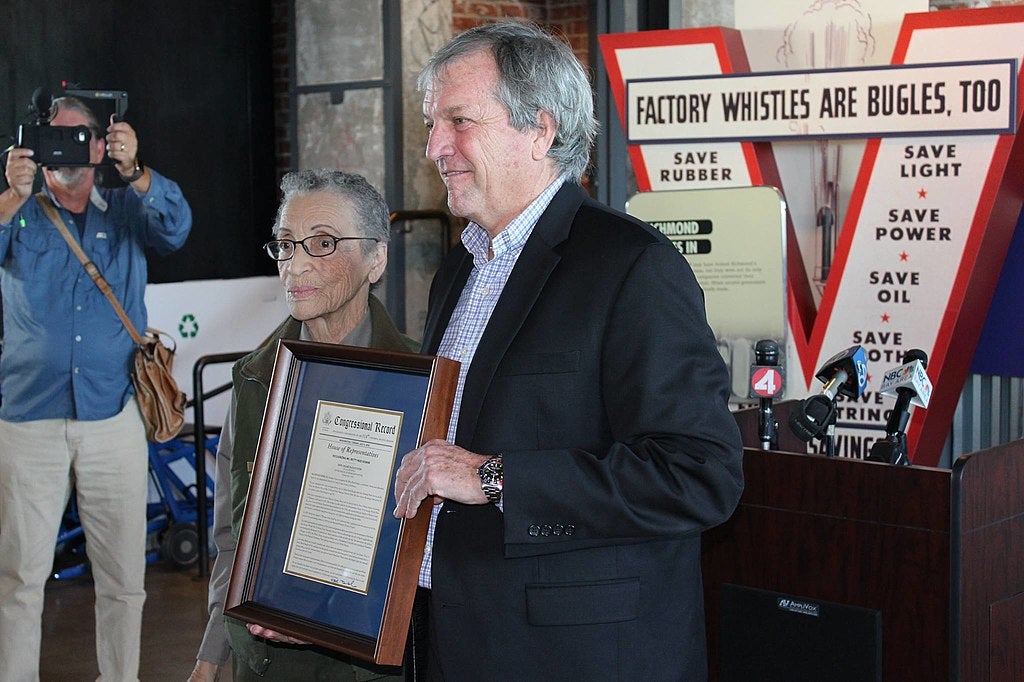 As a park ranger for @NatlParkService, Betty shares the story of her experience during WWII and advocating for equality and a more just, fair, and prosperous society. (Wikipedia).

Age is just a number. But for Betty Reid Soskin, it’s record-breaking. The active-duty park ranger is the oldest on staff, still clocking in to work past her 100th birthday. She’s been with the National Park Service for 15 years, joining at 85 years old when she took on the role to share stories about her life and segregation during World War II.

Assigned to the Rosie the Riveter World War II Home Front National Historical Park in Richmond, California, Soskin suits up for work in her full park ranger uniform for each shift. She sits on her stool and talks to as many people who will listen. She tells them about growing up and dealing with segregation, about being Black business owners, and about working during WWII as a Black American female.

She is noted for often saying, “What gets remembered is determined by who is in the room doing the remembering.” It’s a personal motto that led her to share her story with the masses, even before her years with the National Park Service.

Then as the Rosie the Riveter Park was being built, she was asked to weigh in on the planning process. There were references to Rosie as a pop culture icon — white woman, red bandana — the one we all still recognize today. But the past Soskin had lived? It didn’t exist in their planning stages.

“Black women were not freed or emancipated in the workforce. Unions were not racially integrated and wouldn’t be for a decade,” she told The Washington Post. “We paid dues but didn’t have power or votes,” adding that Black Americans were “dumped” into auxiliary units. Soskin herself had worked with the Boilermakers Auxiliary 36, serving as a file clerk during WWII.

“The history, as I had lived it, was nowhere in sight — not one minute of it.”

In 2007 she began working as a Park Ranger, telling her own story to visitors.

She was making sure she and fellow Black women who served were remembered by sharing with as many people as possible.

The park itself has credited Soskin for advancing their historical accuracy and inclusion, and with the ability to better educate their guests.

Years prior to her work as a park ranger, Soskin wore many hats. She started a record store with her former husband, Mel Reid. Reid’s Records sold Gospel records, opening in 1945. The duo began selling music by Black artists out of their home, then starting a brick and mortar shop after they found success. That prompted them to build a home in a nice neighborhood; they were the target of racism and threats during this time, being accused of moving to a “white” neighborhood.

Soskin’s daughter continued to operate the store until it closed in 2019. However, the start in music led Soskin to fall in love with Gospel music, writing and singing it herself. She was active in her local church and was well known for her songs.

In the late 70s, now remarried to William Soskin, she became a prolific activist for Black and other Civil Rights. On her 100th birthday, Soskin was honored at a California middle school being renamed in her honor. The Betty Reid Soskin Middle School was rededicated. It resides within the West Contra Costa Unified School District. She has also received numerous awards, including being named California Woman of the Year in 1995.