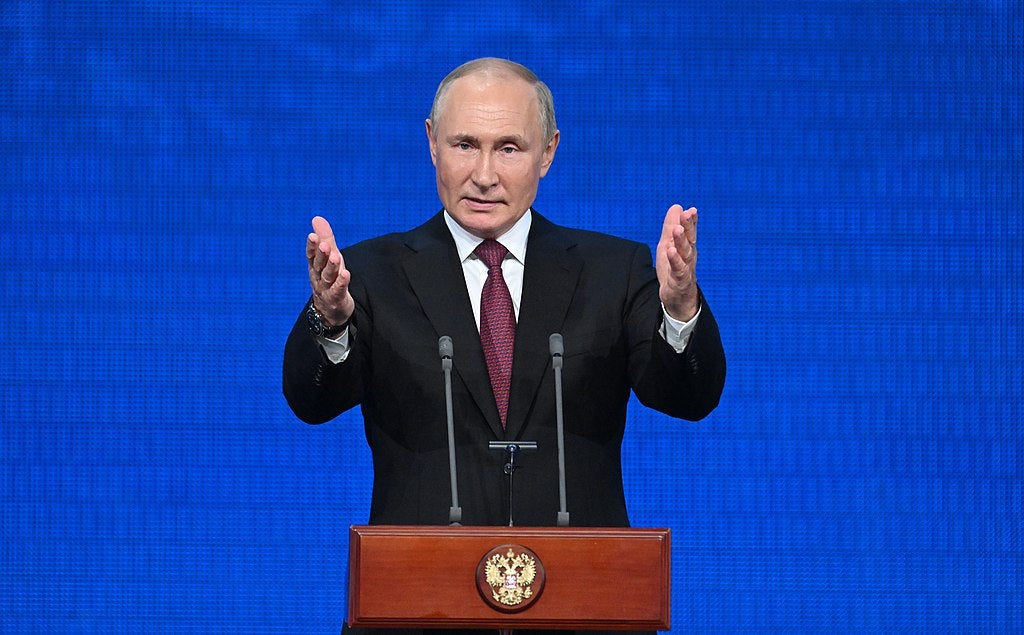 Retired Admiral James Stavridis has written books on leadership, decision-making and even sounded the alarm on China and cyber warfare in his book, “2034: A Novel of the Next World War.” In an opinion piece for Bloomberg, he sounding a new alarm for the West: Russia is going to carpet bomb Ukraine unless we do something about it.

Carpet bombing involves progressively stepping up the size and scope of aerial bombing attacks to completely destroy a given area. This is the kind of strategy used in World War II, before the development of smart weapons. Its advantages include destroying industrial capacity and enemy infrastructure. But because it doesn’t distinguish between military and civilian targets, carpet bombing is considered a violation of the 1924 Geneva Protocols – a war crime.

That fact is unlikely to keep Russian President Vladimir Putin from using it.

Stavridis says the ground war in Ukraine will enter a slowdown phase, as both sides deal with the wet, rainy autumn and prepare for the ground to freeze before major combat operations can be ramped back up. Ukraine, he says, will have the advantage on the ground, with its high morale and highly-trained troops, supplied by the West. Facing a conscript army of drunks and criminals, Ukraine is the superior force.

The air war, he says, is another story. In Russia’s most recent conflict in Syria, Russian air forces employed the saturation bombing strategy, using “dumb” munitions to pound Syrian rebel forces and Syrian cities. Dropping thousands of high explosive bombs, the Russians sought to destroy the forces aligned against dictator Bashar al-Asad, along with any support they have had. Worst of all, the strategy worked.

To illustrate his point, Stavridis says the appointment of Russia’s chief Air Force officer to command of the overall war in Ukraine is a harbinger of things to come. Colonel General Sergey Surovikin oversaw the atrocities committed by Russian air forces in Syria and is likely to employ the same tactics in Eastern Europe. Over the course of the winter, Stavridis says, Surovikin is likely to destroy Ukrainian infrastructure, electric grids, and water supplies to sap Ukrainian morale.

For months, Russian cruise missiles have pounded these sites inside Ukraine, but Putin’s supply of these weapons is running out. As Russia looks to Iran for more high-tech weapons, Putin may finally turn to the large supply of dumb bombs he has in storage, some dating all the way back to the Cold War. The Geneva Protocols will not be a deterrent for an increasingly desperate dictator looking to turn the tide of a disastrous war.

The West, Stavridis says, has to start adding firepower to Ukrainian air defense systems. Ukraine’s President Volodymyr Zelensky won’t get the NATO-imposed No Fly Zone he’s been asking for since the war began in February 2022, however. He will likely get some help from advanced, ground-based surface-to-air missile batteries. There are already many Patriot missile batteries that could be transferred to Ukraine currently sitting on the Polish-Ukrainian border.

To effectively counter the Russian air threat without a No-Fly Zone, he says, Ukrainians must be given the abilities to “close their own skies” and effectively counter an air war he believes Moscow is surely planning. NATO and other European allies could supply Ukraine with surplus F-16 Fighting Falcons, which he says are effective and easy to learn. Other countries can supply Ukraine with Soviet-era MiG-29 fighters, an idea that has been floated before.

Stavridis say this will have the effect of forcing Russia to the negotiating table by early spring, before the next fighting season will begin.