Strange military lingo from back in the day 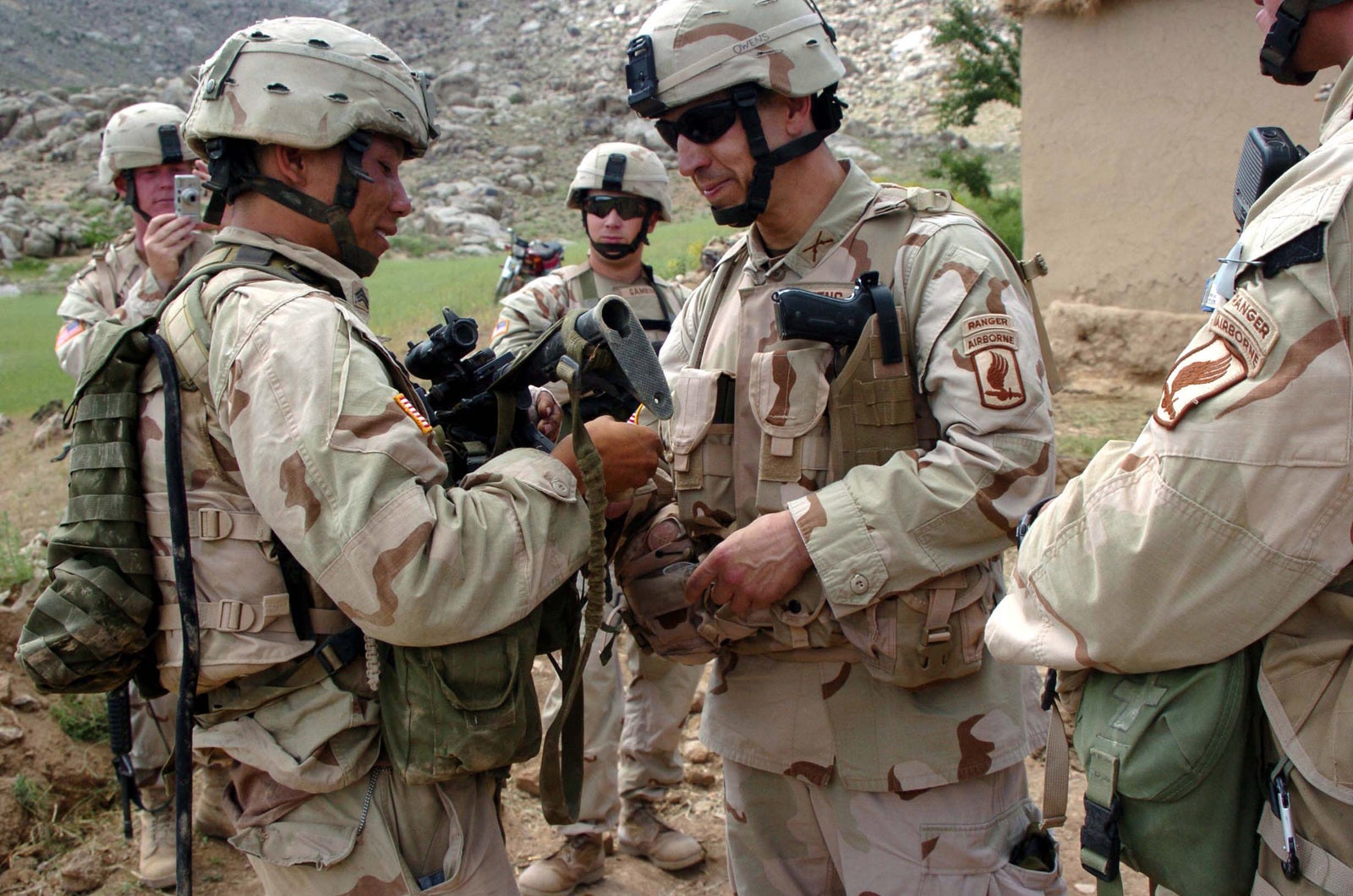 Col. Kevin Owens (center) Commander of the 173rd Airborne Brigade, Vicenza, Italy is shown getting talking with his soldiers in Shah Wali Ko, Afghanistan on Jun. 22, 2005. The soldiers came under attack on the previous day when they arrived in the region to search for and apprehend suspected Taliban members. (U.S. Army photo by Spc. Jerry T. Combes) (Released).

We reckon that way back when, these terms didn’t sound so funky. In fact, at one time or another, they were part of an everyday norm, where — strange as they sound today — these words were regular vernacular. Soldiers from long ago threw these terms around, fully understanding one another, despite how different they sound today.

Join us in this blast from the past where we evaluate once-common sayings and how they were used in typical daily settings. Military style, of course.

Take a look at these former phrases such as:

Today, this is a common term used to describe someone who is a little “off.” However, the term got a far more graphic start in the first World War I. Referring to  a “basket case” meant someone who was so badly hurt that they had to literally be carried in a basket. It often referred to soldiers who had lost multiple limbs. Yikes.

Someone who is “beating their gums” is talking a lot about a certain subject. Often used when others are ready for you to discuss something else.

A letter that a soldier would write to a girl back home. (LOL)

A blighty is an old namesake for Great Britain. It comes from sayings like “a blighty wound” or “a blighty one,” which meant an injury that was severe enough to be sent home. AKA back to England. Obviously, it’s a term that was used by British soldiers.

Washing the dishes. AKA dancing with the sudsy bubbles in the sink.

Cooties are a common term today, poking fun at germs (pre-COVID era), usually among kids. But cooties once referred to head lice that was passed in the trenches. Soldiers were in close quarters and often passed the parasite to one another. It comes from a “coot,” which is a bird known for carrying lice or other parasitic bugs.

Egg in your beer

This means “too much of a good thing.” We don’t get it, because we certainly don’t want an egg in our beer. But apparently, soldiers once did? Or at the very least, they came up with the saying to describe great things.

If you’re “in a flap,” it means that you’re worried or dealing with a great amount of stress. The term comes from flapping birds, which is an ongoing motion so as to say that one can’t be still. Therefore, fretting can put you in a flap.

An overwhelming amount of ribbons on one’s chest. We’re guessing this comes from the amount of color in one spot, but there’s no confirmation on that theory.

A strange term indeed, pogey-bait is candy or a sweet treat for soldiers to enjoy. It was used frequently among American and Canadian soldiers, though it’s unknown how the term originated. A trip to the pogey-bait store, anyone?

Roll up your flaps

AKA — it’s time to stop talking.

This is a fun one, if we have anything to say about it. Spike refers to a gun or weapon that was no longer in use — in most cases because it was destroyed by enemy means or line of fire. Meanwhile, spike-boozled referred to non-weapons that were busted in the line of defense, for instance, boats or planes. After a direct hit, it’s likely that equipment was spike-bozzled indeed.

A letter from your significant other. Spread that sweetness around, they did.

As in you’re dealing with a tough situation, so tough sh**. The T.S. form was facetiously recommended for soldiers who were having an especially rough time and were told to “fill out a T.S. report.” If you were told T.S., it was likely a recommendation to keep it quiet from then on.

A drunken soldier! The word comes from the walking path of a soldier who’s under the influence. No surprise that while intoxicated, they couldn’t walk a straight line.

These are some of the more colorful terms from military members of wars past. Including some phrases that are still used today, albeit with slightly different meanings. These conversational words are a great look at the past and how soldiers fared years ago.

Tell us your thoughts below.