5 hilarious drill instructor episodes - We Are The Mighty 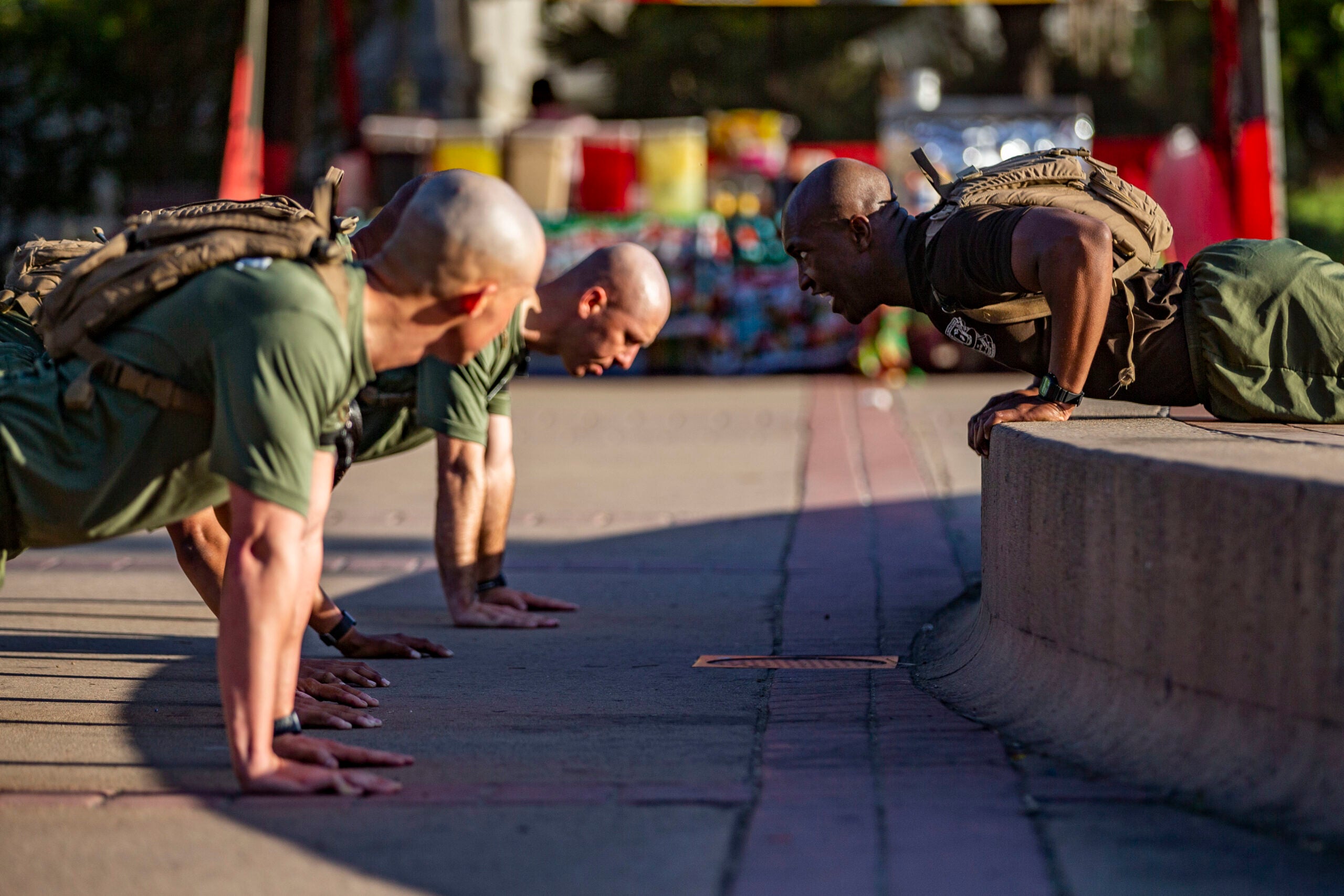 Marine Drill Instructors are the most disciplined and intimidating individuals to ever wear a uniform. Their reputation is legendary and include attributes such as tireless energy, superior attention to detail and frightening aggressiveness. Equally as extreme, but perhaps less well known, is their wit. Phrases spew forth from their mouth that would result in side-splitting hilarity if observed from the outside. Often laughter only comes when reminiscing on the episode years after departing the sacred ground of the Marine Corps Recruit Depots.

Those few hardy souls who dare to laugh in the moment pay for the lack of bearing with grueling exertion on the quarterdeck accompanied by a ferocious berating from the Drill Instructor. The DI’s use a witty combination of irony, word play, and compound-word-profanity-laced tirades to illicit the funniest moments of one’s military service. Listed below are 5 hilarious Drill Instructor episodes.

You know how to drive a stick?

There are two schools of thought when someone goes to boot camp. The first is “Never volunteer for anything.” The idea is to blend into the crowd, don’t stand out, and get through the ordeal without drawing attention to yourself. This can result in reducing the misery to the least possible level. The other school of thought is, “Volunteer for everything.” The impetus behind this perspective is to show initiative, and optimistically run the possibility of breaking the monotony of shared misery with a more enjoyable distraction. This was the hopes of the Marine Recruit who heard the Drill Instructor ask, “Who knows how to drive a stick?!” The Recruit responded loudly “This Recruit Sir!” The DI said “Good, grab the stick coming out of that swab bucket and drive it up and down the squad bay while we’re gone. The rest of you nasties get outside!”

Before the Marine Corps changed their combat utility uniform to the current digital pattern known as MARPAT, Marines routinely starched and pressed their cammies. This came as quite a surprise to many of the young people in the military. Why would I starch and press a uniform that was designed to camouflage me from the enemy? Others embraced the approach, starching the uniform to produce a razor-edged crease, and a cover (hat) that was hard enough to be used as a weapon. Many within the ranks simply tried not to look too disheveled. Even fewer displayed a complete disregard for the standard, their appearance, or the attention they would draw. Such was the case when a Recruit put on a set of utilities that had been balled up wet and stuffed into his footlocker. The Drill Instructor looked at him and inquired, “How many people did you save when you jumped on that wrinkle grenade?”

Before patent leather shoes (commonly referred to as Corofram/Corframs) were introduced, spit-shining shoes and boots was commonplace. It presented a squared-away appearance. It reflected the discipline and attention to detail of an individual who had to invest considerable time and effort to bring about the desired effect. Often this small detail was the deciding factor in selecting a Marine for recognition in a Marine of the Quarter Board or a meritorious promotion. Even those Marines who did not apply an effort toward achieving a spit-shine, would at a minimum apply a high buff to the toe of their boots, just to stay off the radar. In an infantry battalion it was common to apply the machine gunner’s spit-shine before falling out for formation. This consisted of rubbing the toe of your boots on the back of your calves to wipe the dust away, particularly if you were to stand in the first rank. In one formation the Marine Recruit had a complete absence of shine on his boots which elicited the accusatory query “What did you polish you boots with, a REDACTED Hershey bar!?”

Most of those who enter the military do not have the background that adequately prepares them with the knowledge they need to navigate the unique subculture in the ranks. As such, until they adjust to the environment, their mishaps and blunders make them look stupid. The most common type of insult a Recruit will receive from the Drill Instructor are those of the variety that question (or refute) the Recruit’s supposed intelligence. These verbal assaults will sometimes simply be name-calling, many of which are too profane to repeat. Other times they are phrases of such wit and humor they will be recalled decades later, such as, “If your brains were dynamite, they wouldn’t ruffle your hair!”

There are indications that this method of engagement was waned in years, likely a result of increasing political correctness in the military. Now when Marines are instructed to yell louder, they are told, “Say it with your chest!” For decades the line was, “Sound off like you got a…” (may the ghost of R. Lee Ermey finish the sentence). The Drill Instructors would often address the platoon (of male recruits) as “ladies” or the individual Recruit with a common female name. For some unknown reason it seemed to always be Nancy or Mary. The intent was not to be condescending toward women, but rather to cultivate toughness as a manly attribute. In his book, Once Upon a Lifetime, C.I. Greenwood discussing going to boot camp in 1948. As the Drill Instructor looked upon his 110-pound frame in disgust, he simply said, “Well ain’t you a masculine looking bastard.” Another inquiry/assertion commonly heard in years past was, “I bet you were raised in a house full of women, weren’t you boy?!” “Sir, no Sir!” “Yes, you were.” This approach must seem harsh, unnecessary, and questionable to those on the outside. However, with increasing generations of young men entering the service from broken homes, this shocking approach does result in a measure of mental and emotional toughness that produces maturity. When the chips are down, and the bullets fly, a Marine must have the emotional toughness to get through the fight.

Marine Corps Recruit Training is full of challenge, adversity and hardship. In spite of it all, there are also comical moments that will bring laughter for years to come. Laughing in the face of hardship has been attribute of fighting men for centuries. It is a key element that creates lasting bonds of camaraderie and esprit de corps. The 5 hilarious Drill Instructor episode listed above are but a small sample of things that occur on a daily basis within our beloved corps.