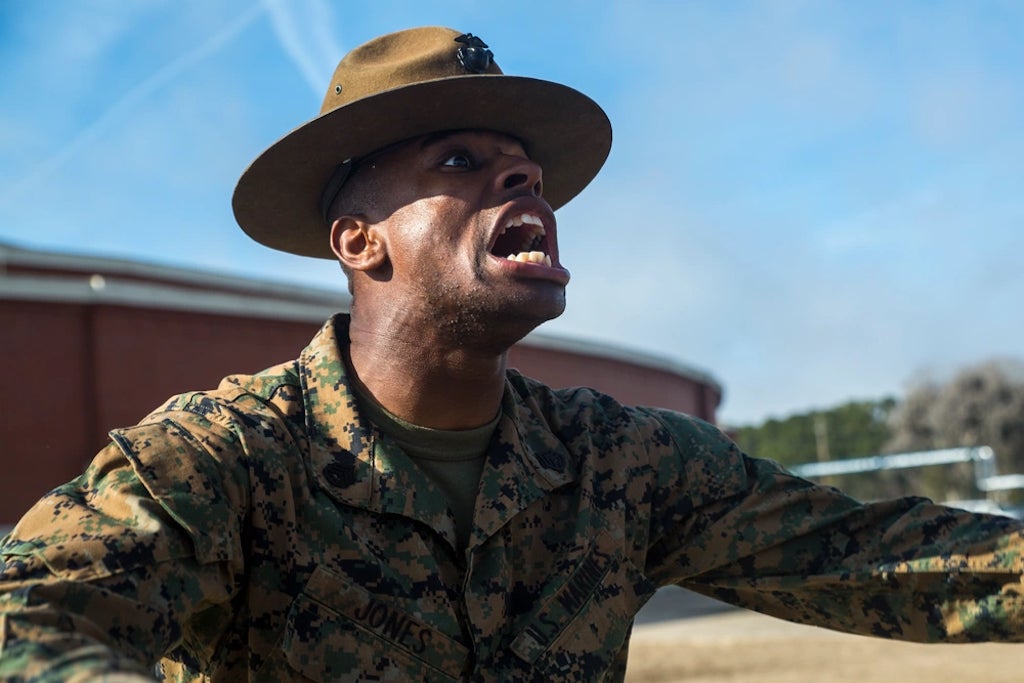 The Marine Corps has been steeped in tradition since 1775 when…my Marine Corps came alive! Marine culture incorporates language that reflects its Naval heritage. Additionally, some words and phrases trickled down from campaigns abroad. Here are 7 unusual USMC slang words every Marine knows:

Tradition says this came from the service of the Marines in China in the 1920s where the word initially meant “working together.” In time, gung-ho evolved to serve as a description of an individual who enthusiastically practiced the more austere characteristics of Marine culture. Gung-ho became so synonymous with the image of a U.S. Marine that when Hasbro’s G.I. Joe created a Marine character among its ranks, he was named Gung-ho; with a large Eagle, Globe, and Anchor tattooed on his chest. Much of the Naval slang used by Marines is well known outside the Corps such as head for bathroom, port for left, and starboard for right. There are many more words in everyday use in the Marine Corps that aren’t well known outside the ranks:

Go-fasters are what the Drill Instructors call your running shoes. A lot of the PT is conducted in a uniform called “boots and utes” which consists of combat boots, camouflage utility trousers and a skivvy shirt. Boots and utes are required for certain events like the obstacle course, the confidence course, and some runs. Generally speaking, your pace is a little slower when running in boots. If your unit is conducting calisthenics, or you are running a PFT then you would wear the uniform “green on green,” which consists of green athletic shorts, a green skivvy shirt and go fasters. The idea being that with running shoes (as opposed to combat boots) you will…go faster. Many young Marines on their first deployment will be mocked by the more salty Marines for wearing their go-fasters in liberty attire, particularly if it’s the same brand/model you were issued in Recruit Training. Most Marines let go of the term “go fasters” once they hit the fleet. The exception being lifers and the extremely motivated Devil Dogs.

It’s common knowledge amongst the sea services that windows are referred to as portholes. The Marines are what the younger generation refers to as “extra.” For this reason, Marines have extended the meaning of portholes to mean not only windows, but also eyeglasses. Specifically, Marines who wear glasses are referred to as Portholes. It’s a moniker used when someone senior is speaking to a junior Marine (or a recruit) whose name they cannot recall. The use of this descriptive name is extremely common in boot camp where heads are shaved and there are few characteristics that differentiate one from another. The few recruits who wear glasses stand out. When the Drill Instructor yells at a group of recruits and yells “Get over here Portholes!” they all know which one he is referring to.

Tracer is a nickname given to someone who has red hair, what the Brits would call a Ginger.  Tracers are those rounds that burn brightly when fired from a rifle or machine gun, allowing the shooter to visually trace the flight path of the round. This allows the shooter to easily make corrections onto target, or to mark a target for other shooters. Tracer rounds for the U.S. generally burn a red/orange, hence their association with our redheaded warfighters. Although nicknames (such as Portholes) may be undesirable to the recipient, Tracer is often well received due to its connotation with a weapon of warfare.

Although the younger generation may immediately think of a popular energy drink when they hear green monster it means something altogether different in the Marine Corps. During boot camp recruits are given a green camouflage notebook filled with various topics they are responsible for knowing. This “book of knowledge” is referred to as a green monster. Recruits are directed to carry the green monster in their cargo pocket. At various times in formation while waiting for their turn as a platoon to commence the next event, they are told to “study knowledge.” They cram their faces into the book and try to stay off the radar. In the Fleet Marine Force there is a common small green logbook obtained through the supply system that is also referred to as a green monster. These sturdy notebooks will also fit in a cargo pocket. You will find them in every unit amongst ranks ranging from Lance Corporal to Colonel.

Either of these phrases essentially mean “we’re leaving” or “time to go.” When infantrymen are getting picked up from the field by means of a helo extract, they throw a smoke grenade to mark the landing zone as the helicopter approaches. When you pull the ring on a smoke grenade there is an initial “pop” sound as the fuze ignites. This reference is used by service members across the force, not just combat arms. In similar fashion pull chocks means the same thing. A chock block is an implement used to prevent a vehicle from rolling by placing it in front of or behind the tire (depending on the slope). Many times the chock block is literally a block of wood. When it’s time to leave the driver will “pull chocks” from beneath the tire signaling departure. Likewise the usage of this phrase is extremely common.

The phrase “good piece of gear” is a powerful understatement, and it isn’t thrown around lightly. It is used in reference to something that never lets you down, something you can always count on…like a poncho liner aka the woobie. You would not use this phrase if something was simply okay. There is a more significant use of this phrase when it is used in reference to another Marine. This is the ultimate compliment you can receive, particularly when it comes from a leader. “Erickson, he’s a good piece of gear.” This sublime accolade communicates a level of approval that is unparalleled. Your reputation will precede you in an organization as small and fraternal as the Marine Corps. Being known as a good piece of gear is an enduring attribute for an individual and a mark that in many ways “you have arrived.”

The U.S. Marine, that peculiar breed of military personnel that is neither soldier nor sailor, yet similar to both, has many other words and phrases unique to the Corps. The ones listed above are just a few examples of some unusual USMC slang.