The use of alcohol in the British military is amazing 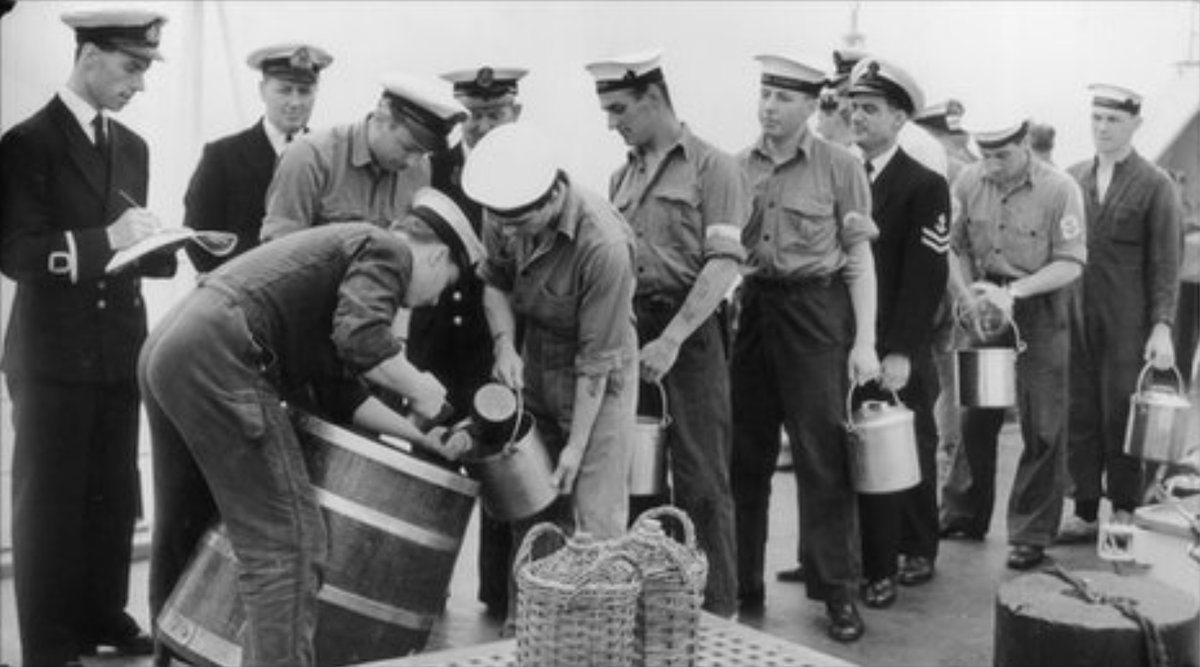 British sailors in 1956 line up to receive their tot (Royal Navy).

Deployed U.S. service members are prohibited from consuming alcohol except on very specific occasions like the Navy’s beer day. The much-celebrated event provides each sailor with two cans of beer after they have been at sea for 45 continuous days and have more than 5 days left before returning to port. However, even this requires permission from a Numbered Fleet Commander before sailors are able to crack open a cold one. For the British though, alcohol remains an integral part of military culture.

The best-known use of alcohol in the British military is the rum ration. Also known as a tot, British sailors were issued a daily ration of one gallon of beer until after the Napoleonic Wars. If beer was not readily available, it could be substituted with a pint of wine or a half pint of spirits. Sailors would prove the strength of their spirits by checking that gunpowder doused with it would still burn; hence alcohol proof.

The tot was slowly cut down to its traditional size of one eighth of an imperial pint in 1850. During WWI, soldiers behind the frontlines were given their tot twice weekly while men in the trenches received a daily ration. It was also common for commanders to issue a double rum ration before sending their men over the top to charge the enemy line. Additionally, rum was used to treat exhaustion, hypothermia, flu, and even shell shock. “Had it not been for the rum ration, I do not think we should have won the war,” said the medical officer of Scotland’s Fourth Black Watch during a hearing on shell shock.

While the U.S. Navy abolished the consumption of alcohol in 1862, the Royal Navy tot persisted until July 31, 1970. Known as Black Tot Day, the loss of the rum ration was considered a day of mourning for many sailors across the fleet. However, British service members are still allowed to purchase up to three one-half imperial pint cans of beer per day. Additionally, certain traditional awards and ceremonies still maintain their use of drink.

The order to “splice the mainbrace” awards sailors an extra rum ration in recognition for outstanding service. The order can only be given by the Monarch and is still used to this day. Other special events like the Queen’s Diamond Jubilee in 2012 also warrant an issuance of tot. Alcohol is also used in drill and ceremony.

Beer and port are common sights on the drill pad in the British Army. Following the calling of commands, a drill sergeant is often presented with a tray of small drinks. “Port is used within drill,” explained Cpt. Graham White of the Army School of Ceremonial in Catterick. “We use port for the voice. Once a small bit of port is down, it then allows for the voice, the vocal cords, to be used to shout louder and longer, preserving the throat itself.” Now let’s see how many drill instructors or drill sergeants decide to pitch the idea of a drill shot to their command.