The 8 demonstration aircraft flown by the legendary Blue Angels 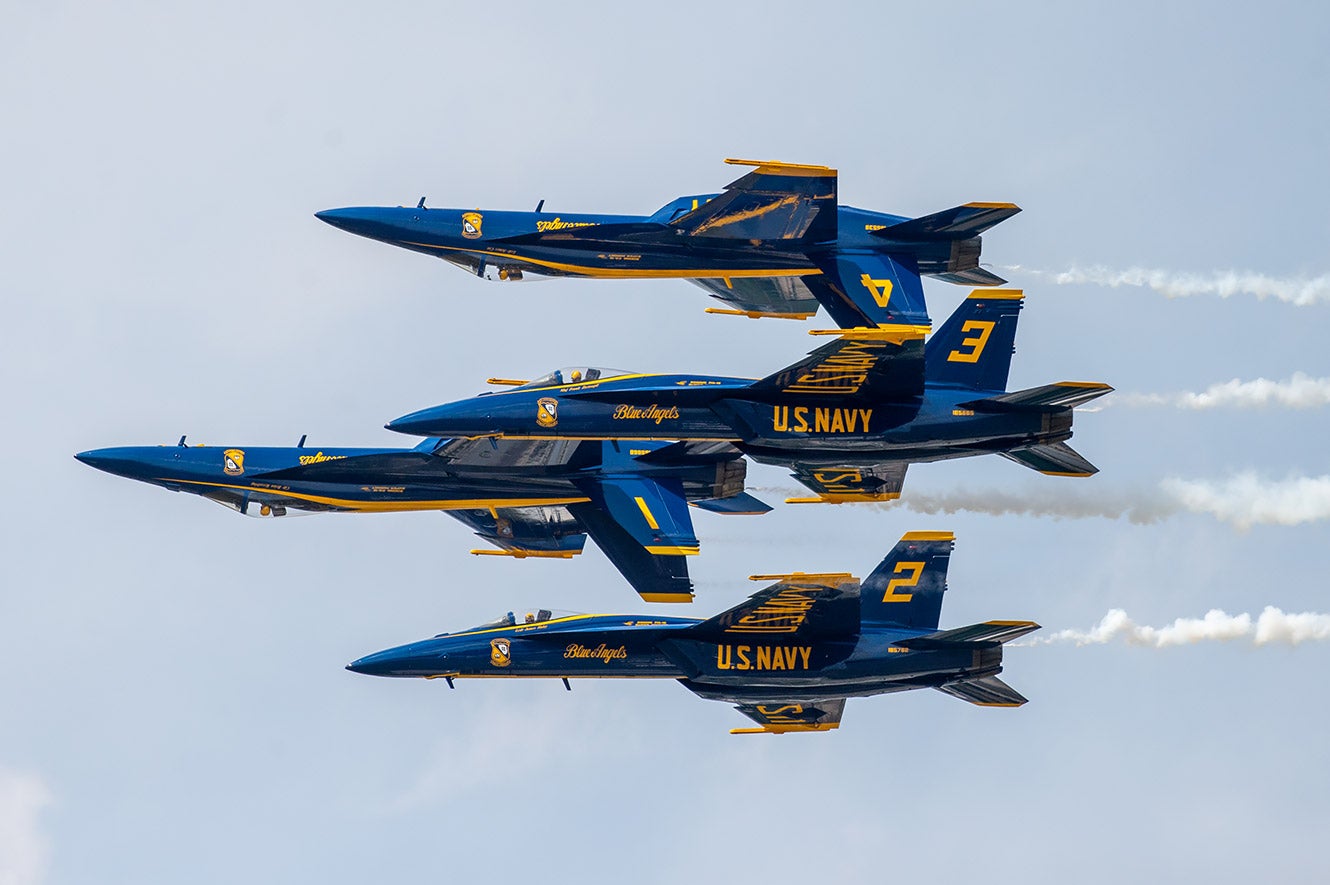 The Navy’s Blue Angel flight demonstration squadron is the second oldest formal aerobatic team flying under the same name in the world. Formed in 1946, less than 300 Naval and Marine Aviators have flown as Blue Angel demonstration pilots. Conversely, an estimated 11 million spectators view their incredible aerobatic routine during the performance season from March to November. Over their long history, the Blue Angles have flown eight different types of demonstration aircraft; all of which were/are combat planes.

The Hellcat is one of the Navy’s most iconic fighter planes. Joining the fleet in 1943, the aircraft was instrumental in turning the tide in the Pacific. It was faster, tougher, and more maneuverable than both the Grumman F4F Wildcat which it replaced and the Mitsubishi A6M Zero that it was most often pitted against in battle. This made it an excellent platform as an exhibition aircraft. With the Blue Angels, the Hellcat sported a navy blue (near black) paint scheme with gold lettering. The Hellcat and its paint scheme only lasted from July until August 1946.

The Bearcat was the last piston-engine fighter built by Grumman Aircraft. It was introduced in 1945 toward the end of WWII. With the transition from the Hellcat to the Bearcat, the Blue Angels adopted the shades of yellow and blue that they still bear today. These colors were used from 1946 to 1948. However, for the 1949 show season, the Blue Angels sported an all-yellow paint scheme. In August 1949, towards the end of the season, the Bearcat and the all-yellow paint schemes were replaced.

Adopted in 1949, the Panther was the first jet aircraft flown by the Blue Angels. It also reintroduced the blue and yellow paint scheme originally sported by the Bearcat. The next year, on June 25, the Korean War broke out. All of the Blue Angels pilots volunteered for combat duty and the demonstration squadron was disbanded. Tragically, the Blue Angels Commander/Flight Leader Lt. Cmdr. John Magda, was killed in action on March 8, 1951. That same year, on October 25, the Blue Angels were reactivated and resumed demonstrations in the newer F9F-5 Panther. The flew the straight-wing Panther until 1955.

Based on the Panther, the Cougar featured a modern swept-wing design. It was also powered by a newer, more powerful engine. Critically, the Panther gave the Blue Angels a more capable demonstration aircraft with a lower stall speed and improved control. In June 1955, the team relocated from NAS Corpus Christi, Texas to their current home at NAS Pensacola, Florida. The Cougar was flown until 1957.

Introduced mid-season 1957, the Tiger was the first supersonic aircraft flown by the Blue Angels. It allowed the team to practice flying high, tight and close. The Tiger also allowed the Blue Angels to perform new maneuvers like the Dirty Loop, a maneuver performed with the plane’s landing gear down. Also in 1957, Left Wing pilot Lt. Bob Rasmussen created a new aircraft design which added “Blue Angels” to the planes, an arrow on their undersides, and stripes on the sides on the canopy. The Blue Angels flew the Tiger through the 1968 season.

In 1969, the Blue Angels adopted their first two-seater aircraft with the Phantom. It was also the only aircraft to be flown by both the Blue Angels and the Air Force Thunderbirds. The fast and powerful Phantom allowed the team to add enough maneuvers to their routine to fill a 22-minute demonstration. In 1971, the Blue Angels performed their first Far East Tour which included Korea, Japan, Taiwan, Guam and the Philippines. The Phantom was flown until 1974.

The Skyhawk was adopted by the Blue Angels during the 1954 winter training season. In November 1985, Lt. Cmdr. Donnie Cochran became the Blue Angels’ first African American pilot. At the time of its retirement, the small and maneuverable Skyhawk was the longest flown Blue Angels aircraft. For the team’s 40th anniversary, a new aircraft was introduced.

On November 8, 1986, the Blue Angels unveiled the Hornet. It is the first purpose-built dual-role fighter/attack aircraft and is still serving in the Navy and Marine Corps as the upgraded Super Hornet. The Blue Angels flew the A, B, C, and D variants of the Hornet until 2020. That year, the team upgraded to the Super Hornet E and F variants which they plan to fly for many years to come.