The WWII Memorial and the role of Gold Star families 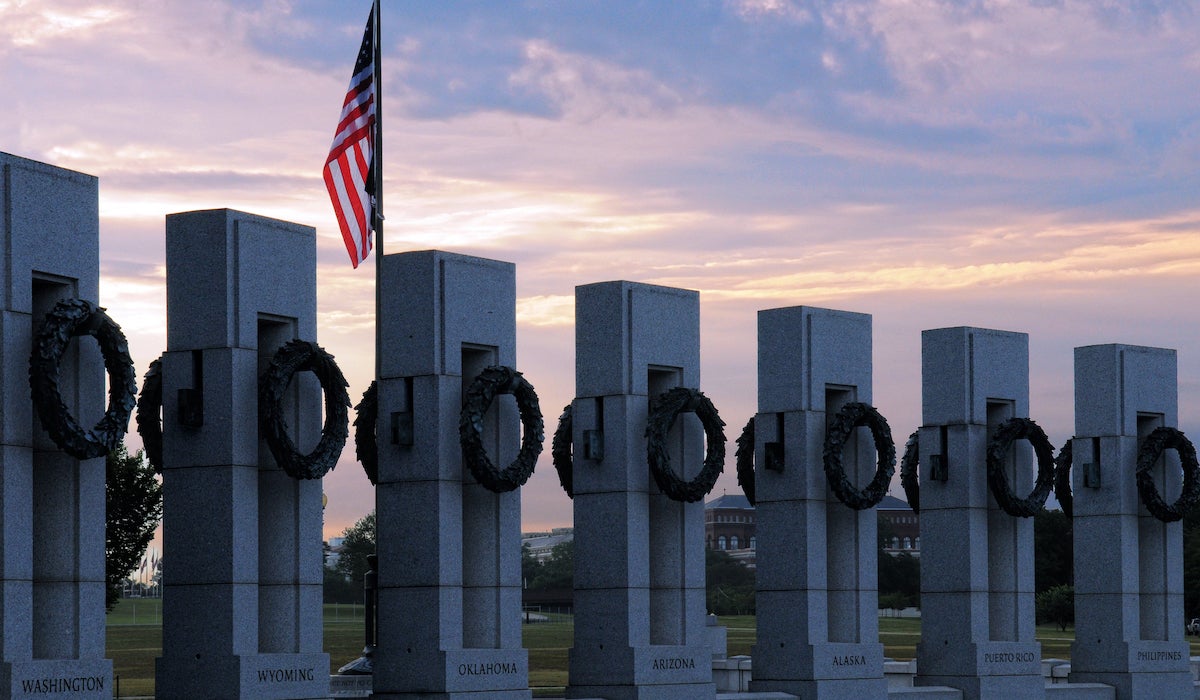 Since its opening in 2004, the World War II memorial had consistently been one of the top sites visited by those exploring the National Mall. More than 4.6 million people visited the site in 2018. It was designed by Friedrich St. Florian, the former chief of the Rhode Island School of Design.

The WWII memorial is full of metaphors and helps illustrate the relationship between the home front and the battlefront. It showcases not just the sacrifices of service members but also Americans at home and illustrates the defining years of the 20th century. The memorial consists of 56 pillars and a pair of triumphal arches, all of which surround a square and fountain. It sits on the former site of the Rainbow Pool at the eastern end of the Reflecting Pool between the Lincoln Memorial and the Washington Monument.

Each of the 56 granite pillars on the memorial grounds is 17 feet tall. The pillars are arranged in a semicircle around the plaza with two 43-foot arches on either side. Each pillar is inscribed with the name of one of the then 48 states of America, along with the District of Columbia, the Alaska Territory, the Territory of Hawaii, the Commonwealth of the Philippines, Puerto Rico, American Samoa, and the US Virgin Islands. There are two wreaths on each pillar. The wheat wreath represents agriculture, and the oak wreath represents industry. Together, these wreaths symbolize that states and territories gave their citizens to serve and also their resources, fruits of their labor, and hard work.

The memorial includes two inconspicuously located “Kilroy was here” engravings to acknowledge the symbol’s significance to American soldiers who served during WWII. Kilroy was here is a symbol that became popular during WWII and represented military presence and protection wherever the symbol was inscribed.

When entering the memorial from the east, a visitor can walk along either the right wall or left wall, both of which picture scenes from the war. In base relief, the scenes progress as the country ramps up to go to war. On the right wall, the scenes show soon to be military service personnel getting physical exams, taking their oaths, and being issued gear. On the left wall, the scenes are more typical of the European theater, and some take place in England and show preparations for air and water assaults. The last scene is a handshake between the American and Russian armies, symbolic of the meeting of the western and eastern fronts.

The place of honor at the WWII memorial is the Freedom Wall. This field of gold stars symbolizes the number of American dead from WWII. The state pillars are arranged from the Freedom Wall outward. The first state listed is Delaware, the first to ratify the US Constitution. To the left is Pennsylvania. The states go back and forth in this manner in a staged sort of military march to represent when each state entered the union.

There are 4,048 gold stars on the Freedom Wall. Each one represents 100 American military deaths. More than 400,000 Soldiers, Marines, Airmen, sailors and military personnel lost their lives or remain missing in action. Of the 16 million men and women in military service during that time, that means that one person out of every 40 died.

“Here We Mark the Price of Freedom,” is inscribed below the Freedom Wall, a sentiment that’s echoed in the other war memorials located at the National Mall.