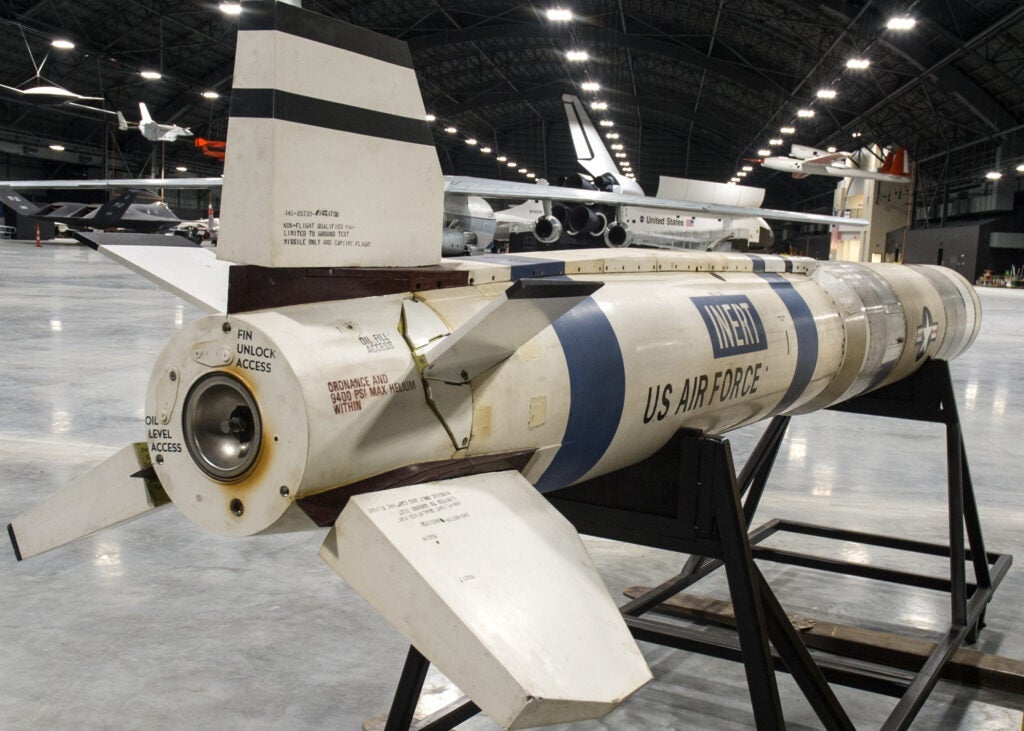 An inert ASM-135 ASAT on display at the National Museum of the United States Air Force (U.S. Air Force).

Confirmed kills distinguish accomplished military pilots from the rest of the pack. They are recorded on an aircraft with the enemy’s flag or the outline of the vehicle destroyed. However, only one American, an Air Force pilot, holds the distinction of a confirmed air-to-space kill.

After WWII, the United States and the Soviet Union engaged in an arms and space race. Both nations rushed to establish dominance outside of Earth’s atmosphere. In October 1957, the USSR pulled ahead with the successful launch of Sputnik, the first artificial satellite in space. Fear of nuclear-equipped Soviet satellites prompted the U.S. military to develop anti-satellite weapons.

In 1978, with the USSR working on its own ASAT weapon, President Jimmy Carter directed the Air Force to develop a new ASAT system. The result was the ASM-135 ASAT, built by LTV Aerospace. Designed to be launched by an F-15 Eagle during a supersonic zoom climb, the 2,600-pound ASM-135 was a multistage missile capable of destroying satellites in orbit with a kinetic energy warhead. It used infrared homing to find the target and was complemented by a modified mission computer and heads-up display in the F-15 that provided the pilot with steering directions. Still, the missile was so large and heavy that the F-15’s gun had to be removed to accommodate it.

On August 20, 1985, President Ronald Reagan authorized a test of the ASM-135 against the Solwind P78-1, an American solar observatory satellite launched in 1979. The historic mission was assigned to Air Force pilot Major Wilbert “Doug” Pearson. On September 13, 1985, Pearson took off from Vandenberg Air Force Base in an F-15A named “Celestial Eagle,” carrying the ASM-135. 200 miles from base, Pearson rendezvoused with an aerial tanker to prepare for the ASAT launch.

The guidance computer in the F-15 provided Pearson with waypoints that directed him to arrive at the exact position, at the exact time, needed to intercept the Solwind. At 12:42 PM, after three and a half hours of flight, the Air Force pilot flew level at 30,000 feet. He lit the afterburner, accelerated to Mach 1.22, and pulled the F-15 up into a 60-degree climb. At 38,100 feet, the F-15 slowed to Mach 0.934 and the ASM-135 was released.

The 30-pound kinetic warhead reached a closing velocity of 15,000 mph before colliding with the Solwind at an altitude of 345 miles. Pearson was unable to see the actual impact and awaited a secret code phrase over the radio to confirm the kill. Although he never received the actual phrase, the screams and shouts of celebration that he did hear were confirmation enough. He had scored the first, and so far only, air-to-space kill.

The ASM-135 had two more successful launches, without satellite targets, in 1986 before funding for the program was cut. More restrictive testing regulations and increased costs ultimately led to the program’s cancellation in 1988. Today, one ASM-135 survives at the Smithsonian National Air and Space Museum’s Steven F. Udvar-Hazy Center annex in Chantilly, Virginia while another is on display at the National Museum of the United States Air Force at Wright-Patterson Air Force Base, Ohio.