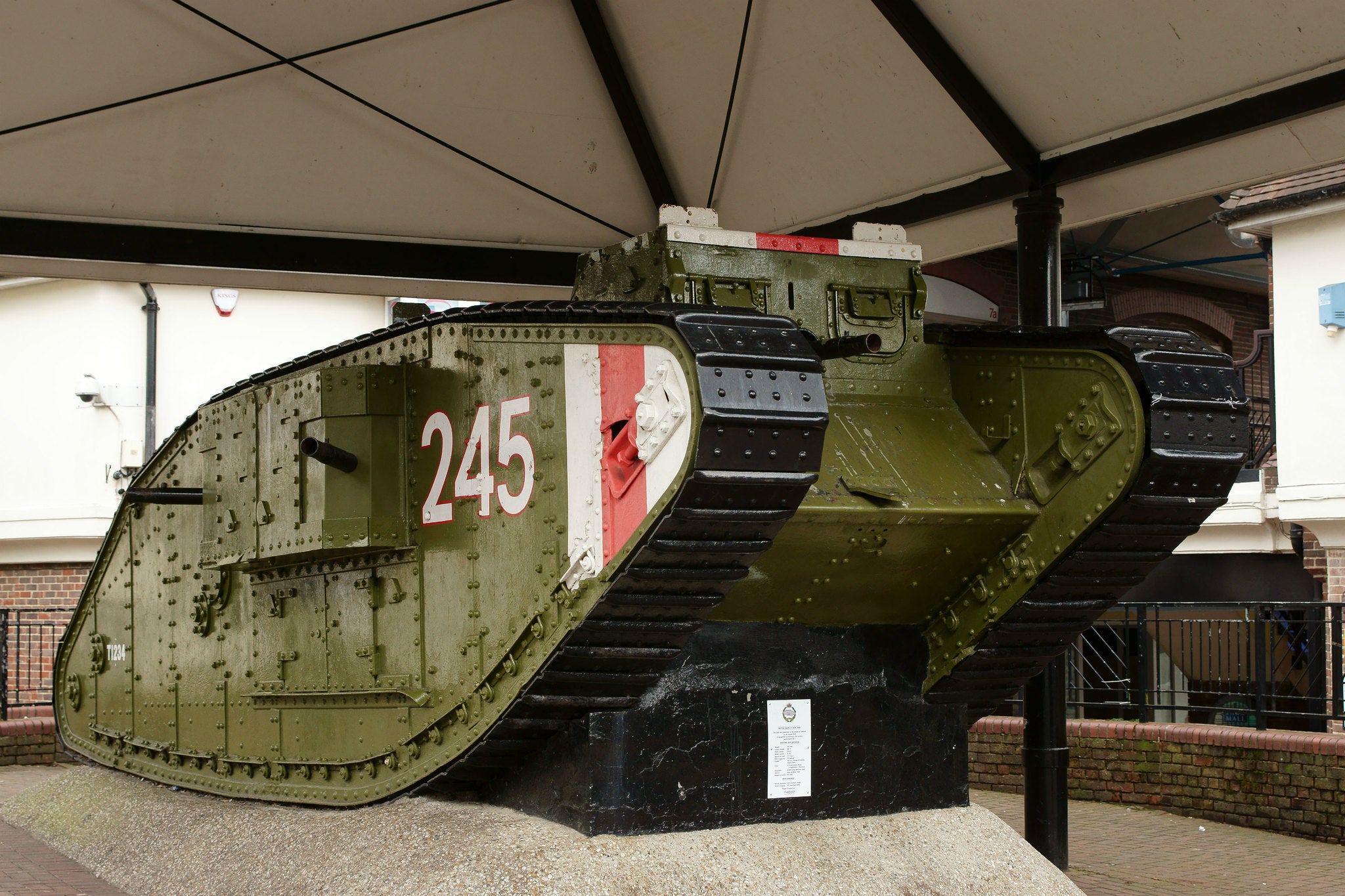 On July 31, 1917, the British guns in the Ypres salient roared to life, marking the opening of the Battle of Passchendaele. The battle would rage back and forth for over two months. Through the chaos, one amazing story emerged: A tank crew refused to give up or be captured and held out, on their own, stranded in No Man’s Land, for three days.

The reason was the unrelenting mud that created an incredibly difficult terrain for the crew.

Their story begins with 2nd Lt. Don Richardson, who was working in his family grocery business in Nottingham when the war broke out in 1914. He joined his local regiment, the Nottinghamshire and Derbyshire Regiment – also known as the Sherwood Foresters – and shipped off the next year.

As Britain began incorporating tanks into its war plans, Richardson was promoted to captain and given command of a tank section. He named his own tank “Fray Bentos” after the canned meat sold in his family store.

The Fray Bentos was a British Mark IV tank. While these early incarnations of armored vehicles were slow moving behemoths capable of about four miles per hour at top speed, they were heavily armored and packed with weaponry.

The tank mounted two Ordnance QF 6-pounder guns, three Lewis guns, and had a crew of eight, each armed with their own personal weapons. On Aug. 22, 1917, the men in the Fray Bentos set off in support of an attack by the British 61st Division in the vicinity of St. Julien. Captain Richardson decided to walk alongside the tank during the advance.

After three weeks of near constant shelling and a heavy rainfall, the area literally became a muddy quagmire.

As the attack progressed, the tank took out a German machine gun position before encountering a fusillade of machine gun fire as it approached the objective. Richardson was hit in the leg and dove inside the tank.

The driver, Lt. George Hill, was then blown off his seat by a wound to the neck just as the tank got into what Sgt. Robert Missen said was “a very deep soft place” that they “went in sideways.” Richardson tried to regain control but he was too late and the Fray Bentos slid into a ditch. The Mark IV tank was prepared for such an instance however, and carried unditching beams on the roof to extract itself from these situations.

Missen and Lance Cpl. Braedy exited the tank to retrieve the unditching equipment but the Germans spotted them and unleashed a maelstrom of fire. Missen later recalled “I heard bullets hitting the tank and saw some Boche about 30 yards off firing at me, I got in again.”

Braedy wasn’t so lucky. In his attempt to attach the unditching gear, he was gunned down. His body sank into the relentless mud and was never found. The remaining men in the tank returned fire with their rifles and Lewis guns. They even managed to get some shots off from their cannons despite their awkward position.

Soon, the infantry attack stalled out ahead of the tank and British soldiers began falling back to their trenches. This left the men of the Fray Bentos completely alone and isolated in No Man’s Land. As Germans approached the tank using an old trench under the tank’s Lewis gun, the crew easily picked them off with their rifles through an opening in the cab.

Germans then tried to swarm over the tank and drop grenades inside to flush out or kill the occupants. The British tankers engaged them in close combat. One German soldier managed to get a grenade inside but one of the men retrieved it and threw it out before it exploded.

It wasn’t long before most of the crew had been wounded.

Their ordeal was far from over. For the next three days and two nights, they fought off the Germans. They even had to contend with British snipers targeting them, unsure if they were Germans trying to steal the tank.

As time wore on, the men drained the radiator and drank the filthy water in order to survive. Richardson decided it was time for them to make their escape. Missen would go first to alert the infantry to their impending return in the hopes of them not being killed by friendly fire. The rest of the crew dismantled the cannons, gathered their maps and weapons, and, despite painful wounds, prepared to crawl through the treacherous mud back to friendly lines.

Under the cover of darkness on the night of Aug. 24, more than 60 hours after they first embarked on their mission, the men exited the tank one-by-one and made their way back to British trenches. Once they encountered men from the 9th Battalion, the Black Watch, they handed over their machine guns and made their way towards the aid station.

The wounded men from Passchendaele.

Richardson was mentioned in dispatches and would later receive the Military Cross for his actions. He would return to action in a new tank, Fray Bentos II, and serve until the end of the war. Lieutenant Hill was also awarded the Military Cross for his actions during the fighting. Missen and one of the gunners, William Morrey, were awarded the Distinguished Conduct Medal for their part in the action. The other surviving gunners, Ernest Hayton, Frederick Arthurs, Percy Budd, and James Binley, were all awarded the Military Medal.

The men of the Fray Bentos were the most decorated tank crew of the First World War.