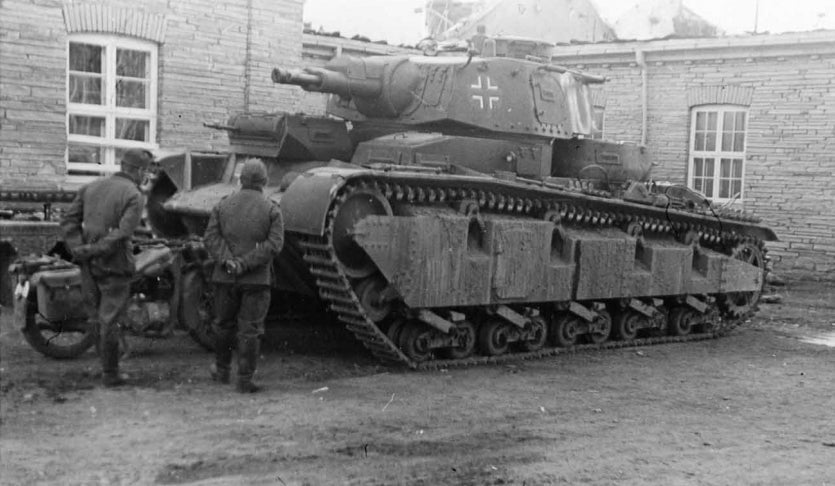 The tank’s appearance on the battlefield during WWI changed warfare forever. Mobile and protected firepower could be used to scout, screen, breakthrough enemy lines, and support infantry. Tank doctrine and design saw many eccentric designs before the world’s militaries largely settled on the single-turret design. In fact, large multi-turreted tanks were quite popular during the inter-war period. Although most tanks were single-turreted by the start of WWII, Germany pressed on with a three-turret design that baffled Allied spies.

As a result of the Treaty of Versailles, Germany’s military development was severely restricted. Following Hitler and the Nazi Party’s rise to power, military research was done in secret. In 1932, development began on the Neubaufahrzeug, German for “new construction vehicle. This, of course, was a cover name for a new medium tank for the Wehrmacht. Large for its time, the tank measured nearly 22 feet long, 9.5 feet wide, 9.5 feet tall, and weighed nearly 26 tons.

The Neubaufahrzeug featured a main turret armed with a 7.5cm KwK 37 main gun, 3.7cm KwK 36 secondary gun, and co-axial 7.92mm MG 34 machine gun. This was supported by two sub-turrets, one to the front-right and one to the back-left, armed with one 7.92mm MG 34 each. While the Neubaufahrzeug’s chassis was designed solely by Rheinmetall, the main turret saw designs from both Rheinmetall and Krupp. The former was more rounded and placed the 3.7cm gun above the 7.5cm gun while the latter was more rectangular and placed the guns side-by-side.

The first two trial tanks were built by Rheinmetall in 1934. One used Rheinmetall’s turret while the other was fitted with a Krupp turret the next year. While these trial tanks used mild steel and offered minimal protection, three more Neubaufahrzeugs were completed with proper steel armor in 1936. All three featured Krupp turrets. They also featured sub-turrets that were redesigned by a sub-contractor.

Though it was designed to be Germany’s state-of-the-art medium tank, the Neubaufahrzeug suffered from drivetrain problems. These stemmed from its BMW aircraft engine and front-drive layout. Full-scale production was never ordered, but lessons learned with the Neubaufahrzeug led to the development of Germany’s Panzer IV medium tank. Moreover, the Neubaufahrzeug and its imposing appearance proved to be an effective propaganda tool. It was displayed at the 1939 International Automobile Exposition in Berlin where it attracted much attention.

The Neubaufahrzeug also served to confuse Allied intelligence efforts. To begin with, the tank’s cover name went through a series of changes throughout its development. The variety of turret designs and orientations photographed by both American and Soviet agents only confused matters further. In fact, spies from both nations independently reported the development of the Neubaufahrzeug as two new heavy tanks: the Panzer V and Panzer VI. Of course, these designations were actually used for the Panther medium tank and Tiger heavy tank which were both very different from the multi-turreted Neubaufahrzeug.

Interestingly, the Neubaufahrzeug was deployed operationally during the invasion of Norway in April 1940. The three tanks built with proper armor were sent mobilized, but only one made it to the front; the other two suffered mechanical problems. When the single Neubaufahrzeug reached the battle north of Lillehammer on April 22, 1940, it was immediately employed against British and Norwegian positions.

British forces engaged the tank with .55-caliber Boys anti-tank rifles that easily penetrated its armor. They landed dozens of hits, including one that killed the a crew member. This forced the Neubaufahrzeug to retreat and made the crew hesitant to press the attack. Instead, German troops advanced without tank cover and routed the British forces themselves.

The fates of the five Neubaufahrzeug examples is unclear. According to documents captured by the British in 1945, destruction of the tanks was ordered in 1941 and completed the next year. Contemporary German sources state that three Neubaufahrzeug were attached to the 1st Panzer Army and sent to the eastern front where they were lost in battle in June 1941. Another account claims that at least one example survived to late 1944 where it was used as a training target for Volkssturm anti-tank teams. The only known surviving pieces of these tanks are a handful of running gear parts in the Gudbrand Valley War Memorial collection in Kvam, Norway.