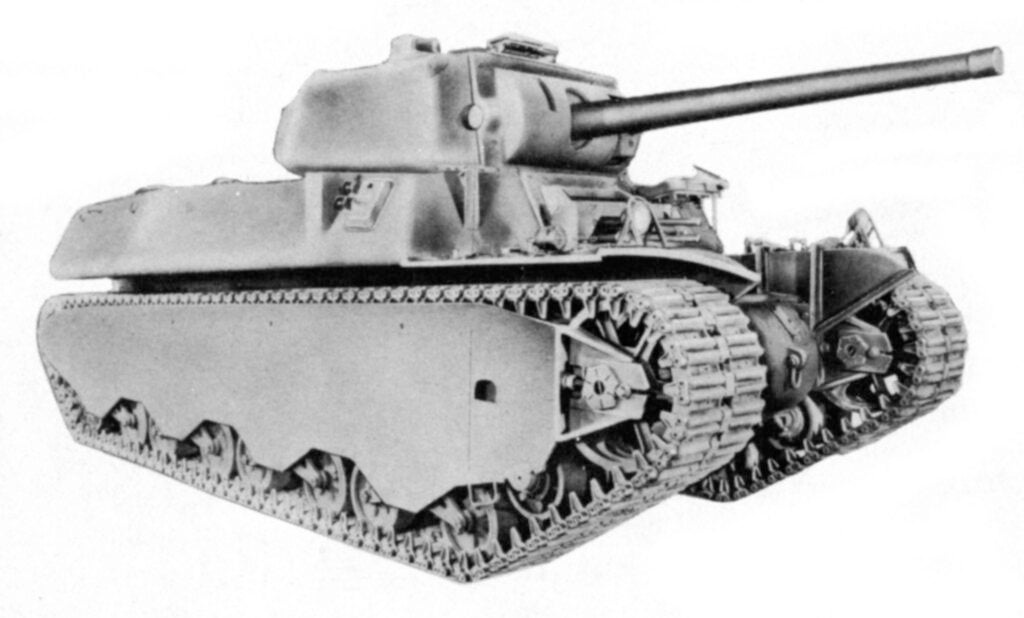 WWI saw the introduction of the tank on the battlefield. Tank technology evolved during the interwar period with stronger armor, better mobility, and more powerful weapons. While U.S. tank development slowed prior to WWII, the successes of German armored units in the early days of the war showed the need to catch up. As the Germans fielded heavier and more powerful tanks like the Panzer IV medium tank and neared completion of the Tiger I heavy tank, the U.S. Army knew it needed a tank to counter such threats.

Although the M4 Sherman medium tank was far more capable than modern media portrays it, the Army wanted something with more armor and firepower to carry its tank formations through the war. In May 1940, the Army’s Chief of Infantry recommended that the Ordnance Corps begin work on a dedicated heavy tank. The project was approved in June and designated the Heavy Tank T1.

Matching its heavy armament, the T1 was a large and heavy vehicle. It weighed over 63 tons loaded for combat and measured nearly 28 feet long. By comparison, the heaviest M4 weighed 42 tons and measured less than 21 feet long. The T1 was protected by more substantial armor than the M4, measuring up to 83mm at its thickest. Angled areas of the tank increased the effective thickness of the armor as well.

The weak point of the T1 was its drivetrain. Such an enormous and heavy vehicle required a powerful engine and strong transmission. While the Wright G-200 radial gas engine provided 825hp, there was no suitable transmission for the tank. Eventually, prototypes were fitted with either an electrical transmission or a torque converter transmission. Another distinguishing feature of T1 prototypes was the hull, which was either cast or welded.

Originally, the Army wanted 5,000 M6 heavy tanks. However, by September 1942, tank production was scaled back in general to allocate resources to aircraft production and the M6 order was cut to just over 100. In December, with the M4 proving to be capable enough on the battlefield, the order was cut again to just 40.

In earl 1943, testing of the M6 variants began at Aberdeen Proving Ground. Although it was criticized by test crews for its awkward and inefficient turret layout and the coaxial 37mm cannon was found to be superfluous, the M6 tested well enough to move forward in development in October 1943. The T1E1 was even tested with the experimental 90mm cannon that later made its way onto the M26 Pershing tank. In August 1944, T1E1s were modified with thicker armor and bigger 105mm guns to attack heavily fortified positions and designated M6A2E1s, but this concept was rejected by General Eisenhower.

On December 14, 1944, the M6 was declared obsolete. Slow and tall, it was surpassed by the M26 with its more modern design. Although it never saw combat, the M6 served on the homefront at War Bond drives where its enormous size captivated the public. They were even used to crush cars during demonstrations. Eventually, all M6s were scrapped except for one T1E1 which remains on display at the U.S. Army Ordnance Museum in Aberdeen, Maryland.