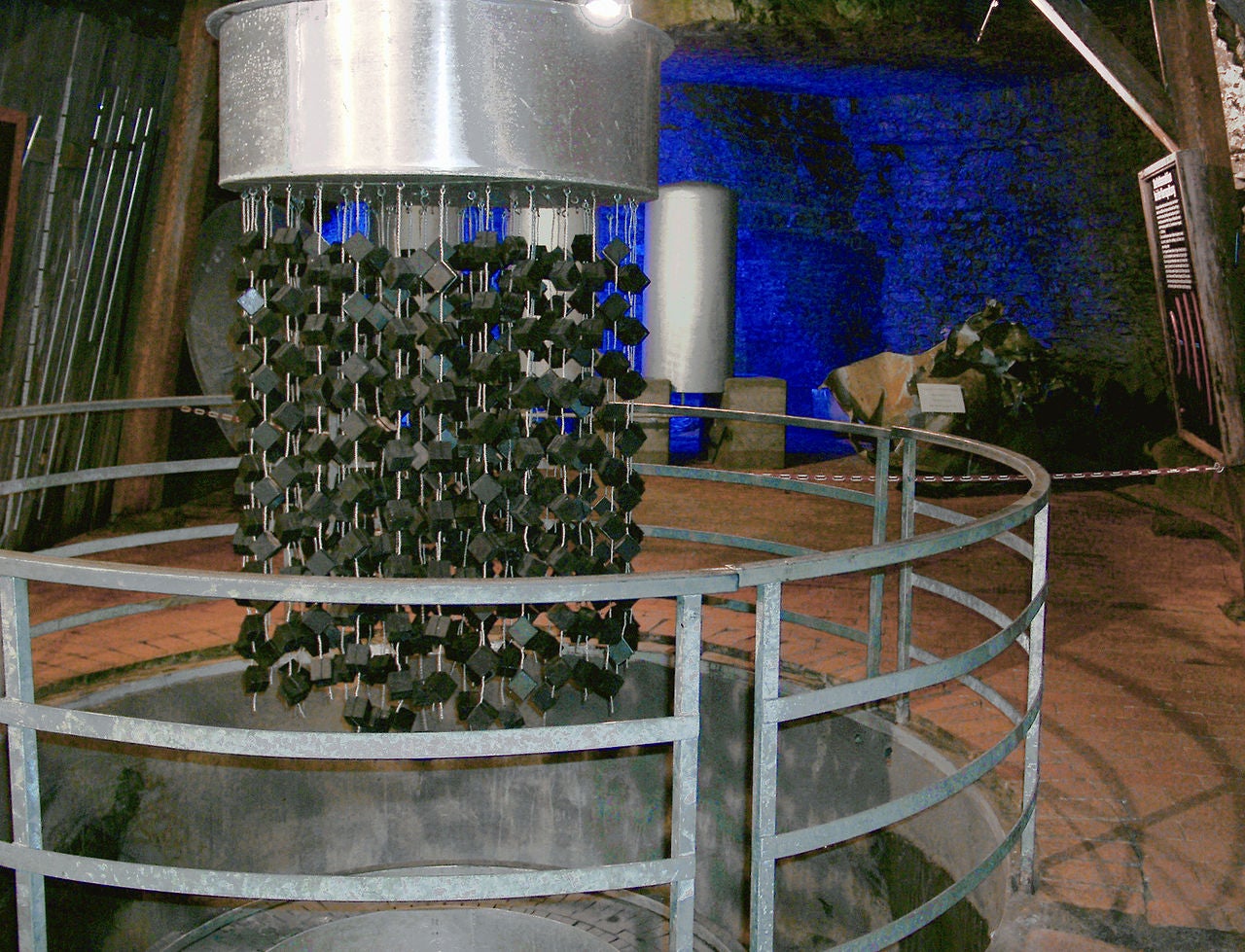 Replica of the nuclear reactor at Haigerloch museum. (Wikipedia).

The United States wasn’t the only country working on creating the world’s first atomic bomb during World War II. The British had their own atomic weapons program at the beginning of the war. The Germans also had their own nuclear program, working to develop the weapon for the Third Reich.

The Nazi German nuclear effort was led by Werner Heisenberg but was ultimately unsuccessful, for a number of reasons. Hitler began the effort to split atoms in April of 1939, just after the discovery that nuclear fission was possible. A team of scientists working from the “atom cellar” of Haigerloch Castle worked to split atoms from 664 cubes of uranium.

Ultimately, the Nazi nuclear program was a victim of the bureaucracy of the German government, who split the effort into three competing teams, ostensibly to fuel innovation. It was a much larger effort that might have benefited from having a collective effort. Luckily for history, it was a failure. They told the German government it would take a three to five year effort to build a weapon, at which point the program was scrapped. Some of the scientists were then drafted into the German wehrmacht.

After the war in Europe ended, the Allies detained 10 of Germany’s top nuclear scientists, but the war in the Pacific still raged on, with Japan seemingly determined to fight to the last man. The United States had a plan for that eventuality too, of course, dropping the world’s first strategic atomic weapon on Hiroshima on August 6, 1945.

By then, the German scientists were still prisoners of the Allies and were being held in England. They would be in captivity for a total of six months. Hoping to learn a little bit about the Nazi German atomic bomb development effort, the Allies locked the scientists in a room and told them about the use of the atomic bomb on Hiroshima, then recorded their conversation when they were left alone.

Otto Hahn, the scientist that first made the discovery of nuclear fission, felt personally responsible for the deaths of hundreds of thousands of people. The scientists in general were incredulous that such a thing had been achieved. Here’s what they had to say:

Werner Heisenberg: : I don’t believe a word of the whole thing. They must have spent the whole of their ₤500,000,000 in separating isotopes; and then it’s possible.

Carl Friedrich von Weizsäcker: : If it’s easy and the Allies know it’s easy, then they know that we will soon find out how to do it if we go on working.

Otto Hahn:  I didn’t think it would be possible for another twenty years.

Weizsäcker: I don’t think it has anything to do with uranium.

Kurt Diebner: We always thought we would need two years for one bomb.

Hahn: If they have really got it, they have been very clever in keeping it secret.

Karl Wirtz: I’m glad we didn’t have it.

Weizsäcker: That’s another matter. How surprised BENZER(?) would have been. They

always looked upon it as a conjuring trick.

Hagn: Doepel was the first to discover the increase in neutrons.

Paul Harteck: Who is to blame?

Voice: Hahn is to blame.

Weizsäcker: I think it’s dreadful of the Americans to have done it. I think it is madness on

Heisenberg: One can’t say that. One could equally well say “That’s the quickest way of

Hahn: That’s what consoles me.

To read the entire transcript of the conversation among the German scientists, check out GermanHistoryDocs.org.