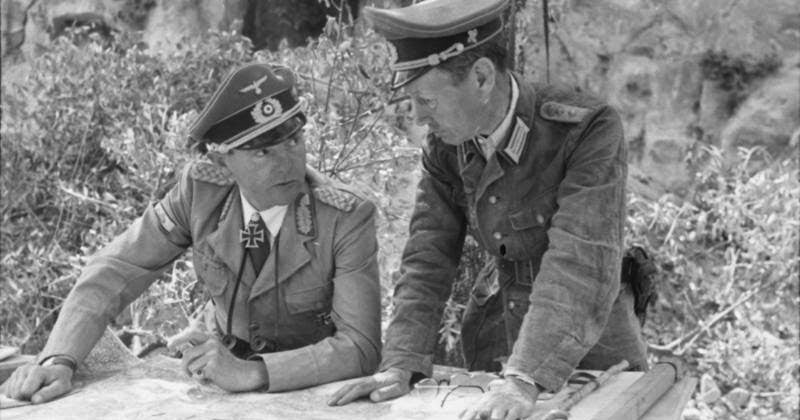 Longtime readers of We Are The Mighty are probably familiar with “Mad” Jack Churchil, the British officer who went into World War II combat with a Scotsman’s broadsword, bagpipes and even a longbow. What they may not know is that Nazi Germany had a Scottish enthusiast of their own. Lt. Gen. Ernst-Günther Baade first joined the German Army in World War I, but his World War II service really made an impression.

Field Marshal Erwin Rommel tends to capture the attention of historians during discussions about the German Afrika Korps, but one of his lieutenant generals captured the attention of his fellow soldiers. Ernst-Günther Baade wore a black beret and a tartan ribbon with matching kilt into combat, while carrying a double-edged Claymore broadsword instead of a traditional sidearm. When he did wear a Luger pistol, it was draped around his neck.

It’s well-known that Baade was sympathetic to the British because he was a lifelong Anglophile. He spoke perfect English and was an international star of equestrian sports. It is believed that if Hitler had been forced from power before World War II, Baade would have been a major player in his early downfall. That never happened, and when the war started, the eccentric general did his duty.

Besides having joined the Wehrmacht during the First World War, that kind of bravado made him extremely popular among the fighting soldiers of the Afrika Korps, where he commanded the 115th Rifle Regiment of the 15th Panzer Division. In 1942 he led his men to victory in Libya and Cyrenaica – where his signature daring earned him the Knights Cross of the Iron Cross, Germany highest military award.

While he might have had luck and bravery on his side, he was still fighting for the German Army and when the Afrika Korps was forced to withdraw, he went with them. First to Sicily and then to mainland Italy as the Allies advanced across both. In Italy, he commanded troops at both the Straits of Messina and Monte Cassino, leading from the front, and even single-handedly destroying an enemy tank.

The truth was that Baade enjoyed combat – and he was good at it. He wasn’t a fan of hanging out at headquarters. If not actively fighting, he was known to watch the battle unfold at the front, carrying a monk’s cowl to avoid being captured or targeted. When he was in command, the troops were not only taken care of for their well-being, they were taken care of for their defenses.

In Italy, Baade had the foresight to stockpile weapons, ammunition, food and even cigarettes for his men. Once he took command at Messina, he turned it into what might have been the most heavily-defended piece of soil in all of Europe, even greater than Hitler’s Fortress Europe, sitting in France across from the British Isles. It’s because of Baade’s leadership and preparation that the Battle of Monte Cassino lasted four months.

As the Allies advanced through Italy and later, across France, Baade was recalled to Germany where he took command of the Volkssturm, the Nazis’ national militia formed in the last months of the war as the Allies approached Berlin. As his staff car drove along a stretch of road in the German area of Holstein on April 24, 1945, just days before the war ended, he was strafed by British fighter aircraft.

Baade survived his wounds from the strafing, but he would not survive his stay in a German field hospital. He died on V-E Day, May 8, 1945.