The role of the Marine Corps during the Civil War 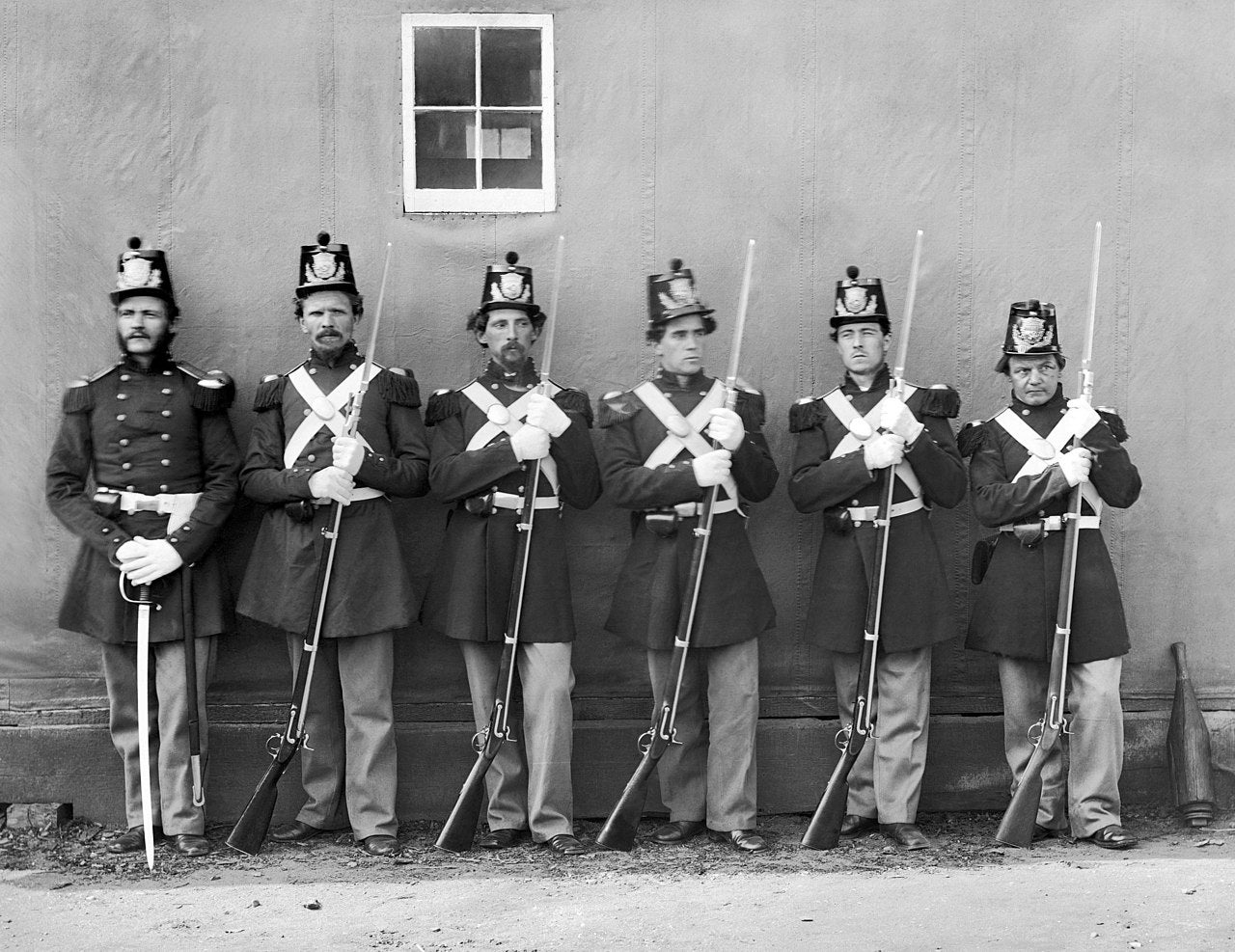 Pictured by an unknown photographer, five U.S. Marine Corps privates with fixed bayonets under the command of their noncommissioned officer (NCO), who displays his M1859 Marine NCO sword.

Every branch has its stories of daring and valor in combat, along with its heroes, from the Revolutionary War through the wars in Iraq and Afghanistan. The Army and Navy obviously feature prominently throughout American military history. The Air Force legacy dates back to the days before it was an independent branch. The Marine Corps is no different – for the most part. From its foundations at Tun Tavern before the Revolution and its performance at the Battle of Bladensburg in the War of 1812, straight through to the “Bangin’ In Sangin” in Afghanistan, the Marine Corps has been right beside them. In the Civil War, however, there just aren’t as many stories or heroes from the Corps’ exploits as there are in other wars. The Marine Corps as a branch existed, but its stories are overshadowed by the Army and Navy – where were the Marines?

Before we upset any Marines, it’s important to note that while there were just 4,000 Marines in the Corps during the Civil War, it played an extremely important role in the Union’s overall strategy, was pivotal in a number of pitched battles, and 17 Marines earned the Medal of Honor during the war. Small but mighty, the Marines were very important to the war effort.

Marines were primarily assigned to blockade duty aboard U.S. Navy ships, which may not be glamorous, but were critical in strangling the Confederate States’ ability to continue fighting the war. Without the blockade, supplies, arms, ammunition, and money coming in from cotton, the south might have been able to fight on indefinitely.

The Marine Corps was also the key to a second cornerstone of the Union strategy to win the Civil War, the splitting of the Confederacy in two at the Mississippi River. Although the Corps performed poorly at the First Battle of Bull Run, the first battle of the war, lessons were learned, recruits were turned to veterans, and the Marines were ready for round two.

By 1862, the second year of the war, Marines were pivotal in the landing and occupation of New Orleans, the Confederacy’s most populous city and a major naval base and economic port. Marines also moved north to capture Baton Rouge, keeping the Mississippi delta firmly in Union hands. When the Army captured Vicksburg the next year, the Confederacy was cut in half.

The Marine Corps during the Civil War were only able to field one battalion at any given time. This was mostly used to capture islands and lighthouses critical to supporting the blockade effort. A joint force of Marines and sailors would also land in the south during Sherman’s March to the Sea, in an effort to destroy railroads supplying southern centers of resistance.

These Marines surprised the 5th Georgia Infantry, capturing its colors. It joined with a combined Army-Navy force to fight off three companies of Georgia infantry during a counter-attack at Gregorie Point, South Carolina. The rebels attacked the Union center, held by the Marines but were beaten back.

Marines fought all over the south, from Georgia’s Tybee Island, South Carolina’s Forts Wagner and Sumter, and North Carolina’s Fort Fisher. Like the rest of the Union forces, they had their wins and their losses. Nowhere was the Marine Corps’ contribution to the Union war effort more critical than in the 1864 Battle of Mobile Bay.

Rear Adm. David Farragut’s daring and brilliant attack on the Alabama port city was made possible by the sharpshooting Marines aboard the admiral’s flagship, the USS Hartford. As Confederate ships tried time and again to knock the Hartford and the admiral out of the battle, the Marines raked their decks with accurate, withering fire. Eight Marines would earn the Medal of Honor at Mobile Bay, leading Farragut himself to say, “I have always deemed the Marine guard one of the great essentials of a man-of-war.”