10 military dogs who made history - We Are The Mighty

10 military dogs who made history 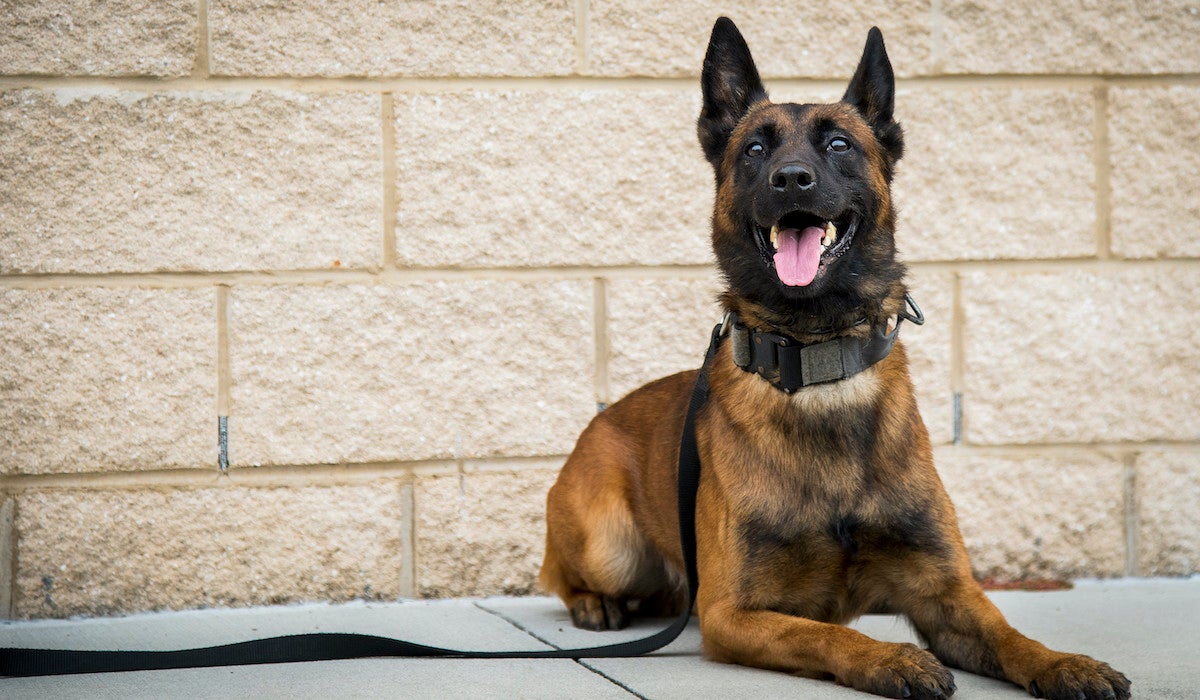 In our homes, dogs are members of the family. On the battlefield, dogs might save your life. Military working dogs are responsible for all kinds of important jobs. Their acute senses of smell and hearing allow them to detect approaching attackers with ease, even in total darkness. Some dogs specialize in detecting mines or other explosives, while others are used as messengers. Others still sniff out injured soldiers in hard to reach places.

While it’s impossible to know exactly how many human lives have been saved by canine military companions, the number is likely upward of 400,000. Just about every military working dog is loyal, but these 10 incredible pups show what it really means to be man’s best friend.

Sallie, a Staffordshire Terrier, was the mascot of the 11th Pennsylvania Volunteer Infantry. She joined soldiers in countless Civil War battles, including the Battle of Gettysburg. There, she mysteriously disappeared for three full days. When the company finally found her, she was guarding wounded soldiers back on the battlefield. While Sally was tragically killed at the Battle of Hatcher’s Run, she wasn’t forgotten. To honor her dedication and sacrifice, soldiers from her regiment raised a statue of Sallie at Gettysburg.

Despite the goofy name and stout, Boston Terrier build, Sergeant Stubby is one of the most impressive dogs in American military history. He earned his title of sergeant by serving in the trenches in France during WWI, alerting troops of incoming gas attacks and rescuing wounded soldiers. He even captured a German spy all on his own!

The heroic canine is the most decorated war dog of WWI, earning numerous medals and becoming the mascot of Georgetown University. The newspapers loved him, and pretty much everyone knew his name. Even presidents were crazy about him- President Wilson, President Harding, and President Coolidge all jumped to meet him!

What do you get when you mix a Husky, Collie, and German Shepherd? A next-level war dog, apparently. A mixed-breed mutt named Chips wasn’t always a working dog. He started out as a pet, but his owner gave him to the military as part of the Dogs for Defense program that was launched after Pearl Harbor. It must have been the right call, because he thrived on the battlefield.  He served in General Patton’s Seventh Army in Germany, Italy, France, and several other locations, and his heroism was well-documented.

On one occasion, Chips charged a pillbox and captured the enemy soldiers inside to save his companions from machinegun fire. Later that night, he notified soldiers of an approaching ambush, saving them twice in one day.  Chips heard enemy soldiers approaching for an ambush, then woke and alerted the men.

He won the most medals of any dog during WWII, including a Silver Star and a Purple Heart. Sadly, his medals were later revoked because the military decided dogs were “equipment” rather than service members.

One night in Vietnam, a German Shepherd named Nemo was on guard duty with his handler, Airman Robert Throneburg. Nemo alerted Throneburg of approaching enemies, and the pair prepared for the fight of their lives. Both were shot by Viet Cong guerillas. Despite his severe wounds, Nemo protected Throneburg until medics arrived. Even when they did, Nemo wasn’t so sure. A veterinarian had to persuade Nemo to stand down to allow doctors to help his companion.

Miraculously, they both survived. While most military dogs spend their entire lives in service, Nemo was offered early retirement back in the States.

United States Marine Corps handler Corporal Dustin J. Lee was with his working dog, Lex, at a Forward Operating Base in Iraq in 2007 when disaster struck. The pair were hit by a 73 mm SPG-9 rocket. Both were severely injured, but Lex wouldn’t leave Lee’s side. Despite attempted treatment, Lee succumbed to his injuries, but Lex survived. He spent twelve weeks in rehab and was left with shrapnel permanently embedded in his spine.

Lex regained full mobility and could have easily returned to active duty, but Lee’s parents requested to adopt him. They had already adopted Lee’s previous canine, and wanted to welcome their son’s other heroic partner in his memory. The appeal was granted, and Lex lived out the rest of his life in comfort. He was also awarded an honorary Purple Heart for his service.

A black lab named Sarbi hails from across the pond. The Australian dog was working as a bomb-sniffing dog in 2008 when Taliban militants attacked. Sarbi’s handler and nine others were wounded, and Sarbi vanished. She was miraculously found a year later at a remote patrol base in northeastern Uruzgan. Her handler was over the moon to see her again, and she was awarded a purple cross by the Royal Society for the Prevention of Cruelty to Animals’ in recognition of her bravery.

These days, most military dogs are used to detect explosives. Cairo, a Belgian Malinois, is as elite as it gets. Cairo is a Navy SEAL and was the only military dog to participate in the operation that took down Osama Bin Laden in 2011. During the operation, Cairo was responsible for securing the perimeter and finding any enemies who evaded capture.

In another operation, Cairo was searching for enemies during a nighttime raid. He found an infant but moved on to another room to attack an adult man instead, leaving the child unharmed. He hadn’t been taught how to distinguish between babies and adults, but he instinctively knew the baby wasn’t a threat. Cairo’s handler was so stunned by the dog’s built-in sense of right and wrong that he went on to write a book about him.

Like many military working dogs, Valdo’s priority was sniffing out bombs. He trained heavily alongside his handler, Petty Officer 3rd Class Ryan Lee, to hone his skills. Valdo had qualities that couldn’t be taught, however. Valdo had character. In 2011, his unit was attacked by a rocket-propelled grenade. He shielded four soldiers from the impact, and was critically injured by the shrapnel.

Army Pfc. Ben Bradley believes he wouldn’t have lived to see another day if Valdo hadn’t been there. While Valdo did survive, his injuries brought his military career to an end, Lee adopted him to give him a happy retirement.

A German Shepherd/Belgian Malinois mix named Lucca completed two tours and over 400 missions as an explosive-detecting expert. In 2012, Lucca found a hidden IED and was searching for more, when one detonated. Lucca took most of the hit, saving several Marines who were nearby. Her injuries were so severe that her leg had to be amputated, but according to her handler, she hasn’t lost any of the pep in her step. She was given an honorary (unofficial) Purple Heart by a fellow Marine in honor of her six years of dedicated service.

A special operations military working dog named Conan has more grit and guts than most people ever do. Named after comedian Conan O’Brien, the Belgian Malinois works in the US 1st SFOD-D. One of his most famous achievements took place during the Barisha raid in Syria- the one that brought an end to Abu Bakr al-Baghdadi, the former leader of ISIS. During the mission, Conan chased Baghdadi into a tunnel, where he detonated his suicide vest.

Conan was injured during the raid, he has since returned to duty. Many soldiers and citizens have petitioned for Conan to be awarded the Purple Heart medal, but so far the ban on military canine awards hasn’t changed.