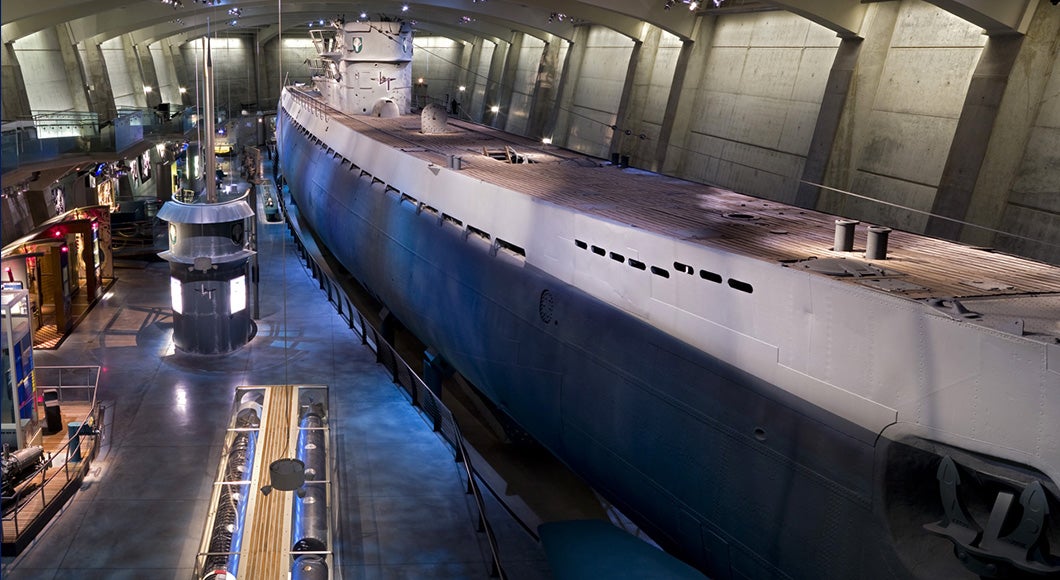 U-505 is a German Type IXC submarine that was built and served during WWII. On June 4, 1944, she was captured by U.S. Navy Task Group 22.3 in the Atlantic off the coast of the Western Sahara. She was towed to the U.S. Naval Operating Base in Bermuda where she was studied extensively. At the end of the war, U-505 went on a war bond tour of the east coast. After the war, the Navy had no use for a German submarine and planned to sink her as a practice target.

At the time, Chicago’s Museum of Science and Industry was looking for a display submarine and heard about U-505. In 1954, the Navy agreed to donate the submarine to the museum. However, there was still the matter of getting the warship to the museum. Chicago residents managed to raise $250,000, just under $2.5 million in 2021 adjusted for inflation, to cover the transportation and installation costs.

U-505 was towed from the Portsmouth Navy Yard to the Great Lakes and made a stop in Detroit in July 1954. The final leg of the 3,000-mile journey, and the most challenging, was still to come. U-505 had to moved up the beach from Lake Michigan and across Lake Shore Drive to reach the museum just 900 feet away.

One of the busiest streets in America, Lake Shore Drive carried Chicago’s lifeblood of commerce and traffic. The city agreed to shut the street down for 12 hours from 7PM on September 2nd to 7AM the next day. The company contracted to take on this enormous task was the LaPlant-Adair Company.

Based in Indianapolis, the LaPlant-Adair Company specialized in moving the immovable. From entire homes to a 250,000 gallon Ford plant water tower (still full of water), the company had the moving experience to take on U-505.

At 7PM sharp on September 2, 1954, Chicago police shut Lake Shore Drive. Simultaneously, U-505 crept off the Lake Michigan beach. A series of screw jacks, hand-turned by men, lifted the 920-ton U-boat just four feet, level with the street. The LaPlant-Adair Company’s president, Kenneth Adair, was there to personally supervise the move. He was joined by 10,000 spectators who came to see the submarine cross the street.

A system of tracks and rollers were continuously built, dismantled, and rebuilt to move U-505 just a few feet of the 300-foot-wide street at a time. Despite the herculean effort on display, the enormous crowd dwindled as the night dragged on. By the time U-505 made it safely across Lake Shore Drive just before 4AM, only 500 spectators remained. Still, the LaPlant-Adair Company accomplished their goal with time to spare.

Thanks to the LaPlant-Adair Company’s efficiency, U-505 proudly sits on display at the Chicago Museum of Science and Industry today. Although the Navy stripped her interior, the museum has restored her exterior extremely close to original condition. She stands as a testament to the Germans who crewed her, the Americans who captured her, and the movers who helped her cross the road.