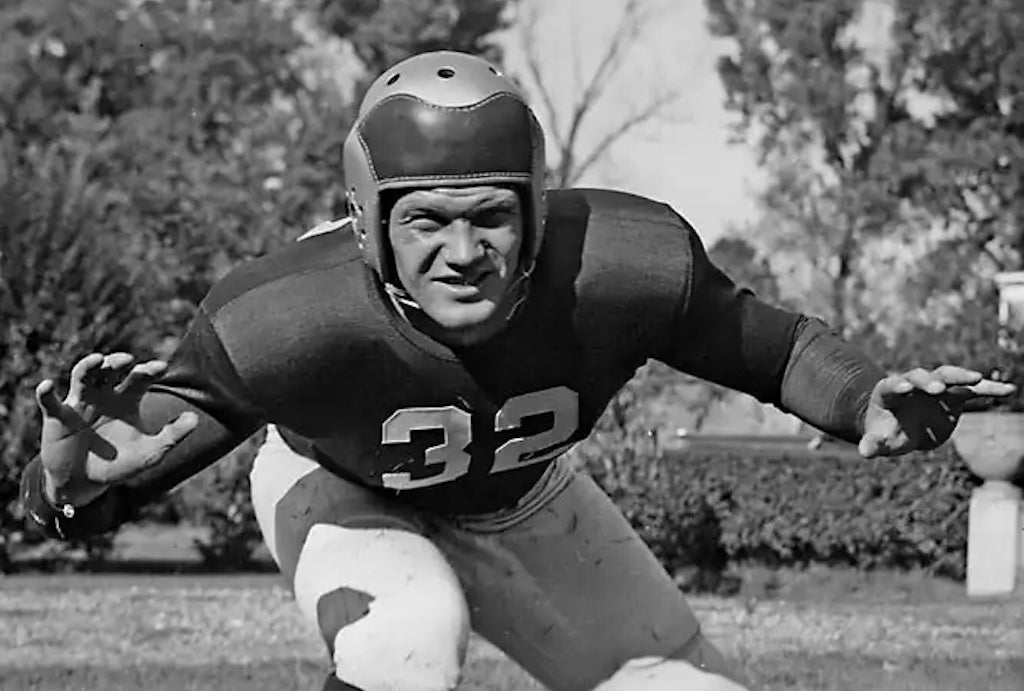 NFL player Alfred Blozis was born on January 5, 1919, in Garden City, New Jersey. In high school, he developed his skills in the discus throw and shot put. Blozis’ performance as a high school athlete earned him admission to Georgetown University where he competed on the school’s track and field, football, swim, and basketball teams. He won AAU and NCAA indoor and outdoor shot put titles in 1940, 1941, and 1942. While his size (6 ft. 6 in. and 250 pounds) made Blozis an exceptional athlete, it also prevented him from doing what he wanted to do: enlist.

When America entered WWII in 1941, Blozis tried to drop out of college and join the Army. However, his size exceeded the Army’s height and weight standards and he was barred from enlistment. Unable to join the military, Blozis continued his collegiate athletic career and was drafted into the NFL by the New York Giants in 1942. He played offensive tackle during the 1942 and 1943 seasons, making the 1942 All-Star Game as well as All-Pro and the 1940s All-Decade Team in 1943. Despite his success in the NFL, Blozis kept trying to enlist.

After continued enlistment attempts, Blozis was granted a height and weight waiver by the Army. It took further persuasion to keep out of a desk job, but Blozis enlisted on December 9, 1943. His first assignment was as a physical instructor at Walter Reed General Hospital, a position for which he was well-suited. However, Blozis wanted to be where the action was. So, he applied for infantry officer training.

Blozis was accepted and reported to Fort Benning, Georgia for his training. There, he set an Army record for the longest hand grenade throw at 94 yards, 2 feet, 6.5 inches. Upon completing training, Blozis commissioned as a 2nd Lieutenant and was assigned to the 28th Infantry Division. Notably, he was granted furlough to return to the Giants and play three games in 1944. This included the NFL Championship game against the Green Bay Packers on December 17. Six weeks later, Blozis went from the gridiron to the battlefield to fight in the Battle of the Bulge.

On January 31, 1945, Blozis’ unit was operating in the Vosges Mountains of eastern France near the border with Germany. It was his first combat action. During a firefight, a grenade landed in Blozis’ foxhole. He was gravely wounded and his men treated them as best they could. However, they were cut off from friendly forces and evacuation wasn’t possible. Tragically, Blozis succumbed to his wounds before Free French forces broke the encirclement two days later. Blozis is buried at the Lorraine American Cemetery and Memorial in Saint-Avold, Moselle, France.

In recognition of Blozis’ sacrifice, the New York Giants retired his jersey number, 32. In April 1946, he was featured in a True Comics story titled “The Human Howitzer.” Blozis was inducted into the College Football Hall of Fame in 1986 and the National Track and Field Hall of Fame in 2015.