Andrew Biggio is elevating WWII veteran stories one at a time

Andrew Biggio is elevating WWII veteran stories one at a time 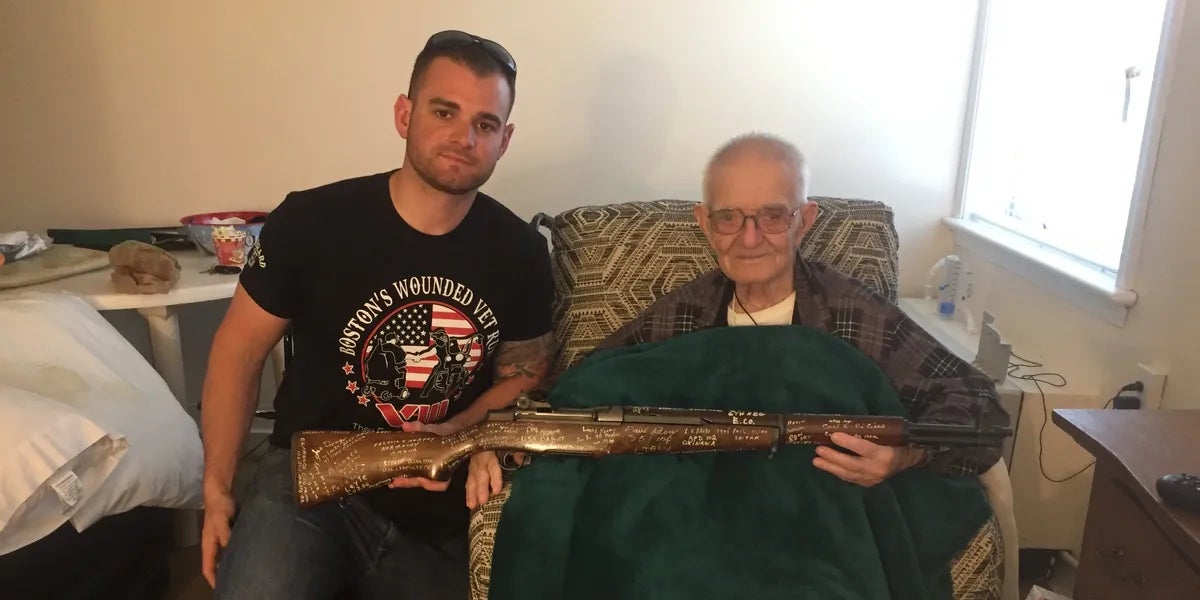 Mentorship through community – that’s what former Marine Andrew Biggio has found in connecting veterans. As the founder of Boston’s Wounded Vet Run, a motorcycle rally nonprofit, he’s helped raise over a million dollars for wounded veterans. In assisting the veterans of his own war, Biggio realized he could help others, too. Namely, he wanted to find a way to elevate the voices of America’s silent veterans – those who served in World War II.

“I saw that they were leaving us at an alarming rate and that their knowledge was leaving with them,” said Biggio.

That led him to the idea that there had to be a link between the WWII generation of veterans and living a successful life after deployment.

“It’s not just that they came home and had multiple careers. These guys led by example and I think there’s something that we can learn from that,” he said.

Tell me the worst story

Biggio met veterans at the end of their lives and asked them about their worst experiences in combat. Then, he took those stories and compiled them into a book. Now, it’s more than just meeting and conversing with veterans. It’s an entire movement.

Because of his deeply rooted ties with the New England veteran community, it was relatively easy for Biggio to tap into networks of existing WWII veterans. He compiled a list and started knocking on doors. As an icebreaker, Biggio brought along an M1 Garand rifle. As the standard issue weapon of the time, simply holding the gun helped bring back memories.

“It acted as a time machine to take them back 75 years. I asked them to tell me about their most stressful combat experiences,” said Biggio.

The veterans started opening up, and Biggio realized that their experiences might also help OIF/OEF veterans. While swaths of veterans returned from war to launch successful civilian careers, many struggled, just like today’s veterans.

“I wanted this to be an inspiration for guys like me. So they could know that they don’t have to live their lives in the shadows,” he said.

In total, Biggio interviews 200 WWII veterans, and each one’s perspective on life and combat adds to the patchwork quilt that is The Rifle. The book is a compilation of individual stories, but it’s also a unification of service.

A Marine Corporal from the 6th Marine Division describes the warfare on the island of Okinawa. A 106th Infantry Division Soldier explains what it was like to be captured on the first day of the Battle of the Bulge. Friends, neighbors, and 82nd Airborne veterans remember the jumps that made history. The last of Merrill’s Marauders tells what it was like to be in Burma during WWII while his buddies went to Europe.

Biggio interviewed more than 200 WWII veterans for this book, capturing their successes, triumphs and challenges, too. He recalls that speaking with these veterans brought him back to his own service. He said while wearing the uniform, he wasn’t “conscious of the men who wore it before me.”

“I didn’t realize that my unit saw heavy combat in WWII, but I didn’t understand what that meant. Then I started meeting those guys and that’s when it came for circle that I was carrying on their tradition,” Biggio said.

Leading by example is one of the tenants of service, so Biggio started to explore other ways he could continue to give a voice to WWII veterans. Then he had an idea. What if he crowd-funded money to bring these veterans back to their battlefields?

Return to the Battlefields

Biggio said he expected to raise a few thousand dollars and be able to take a handful of veterans back to their landing zones and battle sites. Within five months, he’d raised $70,000. With that money, Biggio gathered 17 New England area veterans. Together, he traveled with them to the Battle of the Bulge for the 75th anniversary.

Since that initial trip, Biggio has organized several other returns. In March 2022, on the 77th Anniversary of Operation Varsity, Biggio and the 17th Airborne Association erected the first-ever monument to the division’s jump into Germany. It serves as a reminder of the brave paratroopers who liberated Germany during the “forgotten jump.” Four veterans of the 17th Airborne Division were present for its unveiling. The monument is located at Hotel Haus Duden in Wesel, Germany.

In December 2022, Biggio will travel with four veterans for another return trip to the Battle of the Bulge site. Three have never been back, and Biggio expects an emotional reunion with the landscape that shaped so much of their lives.

“These veterans have a story to tell. As the generation who’s taking the reins from them, it’s my duty to make sure their memories are preserved,” Biggio said.

Next year, Boston’s Wounded Vet Run is planning to honor Marines wounded in the Kabul airport attack. Follow Biggio’s journey of returning veterans to their battlefields here and support his cause here.

All images used with permission from Andrew Biggio.