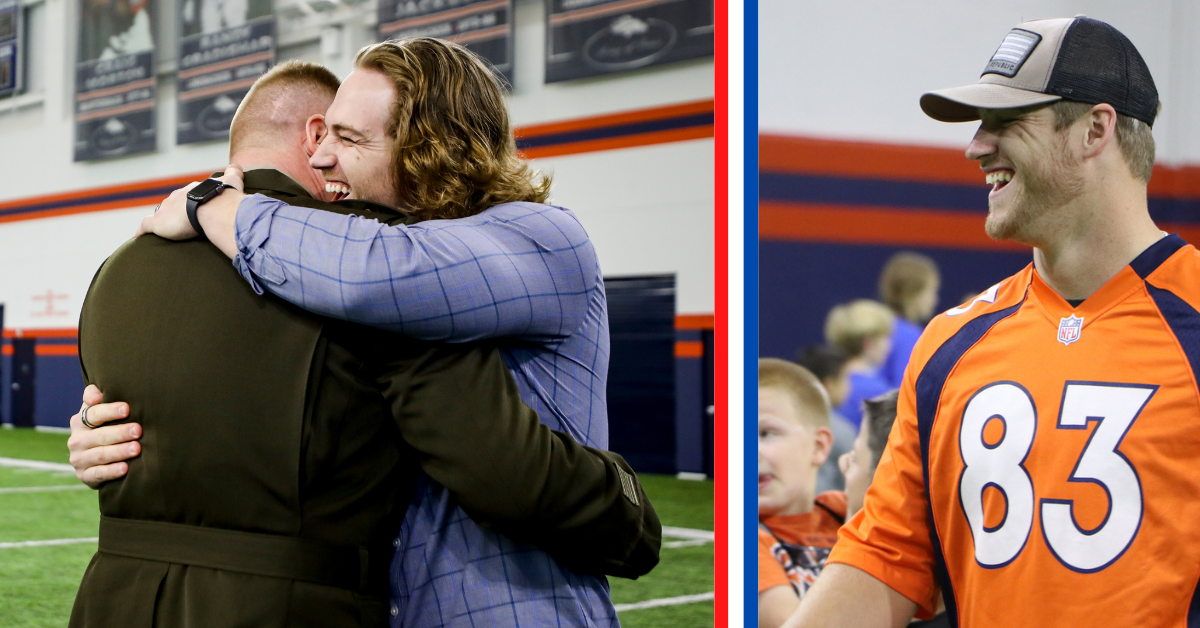 Known for his skills on the green turf as a fullback for the Denver Broncos, Andrew Beck was first an Army kid and it built the foundation for everything.

“I was born in Fort Knox, Kentucky and I lived in 11 places before I got to college in Austin. We moved around a lot with dad being active-duty. I think they’re up to 20 or something moves. They’re still getting after it,” he laughed. “I tell people all the time about how growing up as a military brat, I’ve seen some amazing things and met some amazing people that I wouldn’t have otherwise. And I truly believe that. I do think it’s played a large part in molding me into who I am. I’m very proud of how I was brought up.”

A Life Built Through Hard Work

Beck was raised with the values of working hard and making the best of any situation, a hallmark theme of the military. It’s this lesson which took him from playing for the University of Texas all the way to the NFL. And for him, it was always football.

“One of the biggest things that I learned growing up as a military kid is how there’s going to be things happening that are out of your control. The biggest thing you can do is take them and turn them into a puzzle, meaning there’s always a silver lining in everything,” he explained. “So, make the positive out of the situation, make the most of it and do everything that you can with the situation you’ve been presented with. I think I’ve done a pretty good job with that. I do think it’s made a huge impact on my success in growing up and fortunately, it was enough to play football in the NFL with.”

He shared that his dad always encouraged him to see out the thing that made him happy. “I still wake up every day and pinch myself. I truly get to live a dream and you’re trying to never take that for granted or let enough or a moment pass or you’re just taking advantage of it. I try to get the most out of this experience because I certainly can’t do this forever. And mid-season aches and pains kind of remind you of that,” he said.

During his three seasons with the Broncos, Beck has made a name for himself in his volunteer efforts for the military community. Through his outreach he’s impacted over 325 military families. In 2021, he was chosen for USAA’s Salute to Service Award. His most recent passion has been supporting Freedom Service Dogs of America.

“They do incredible work consistently year in and year out and it’s been a real honor to be able to work with them. The impact that these dogs will have on their new handler’s life is unbelievable,” he shared. “It gives you a deeper sense of gratitude for the people who are standing out there, what they do and everything they’ve gone through. They are some of the most selfless people on the planet. When I get the chance to work with veterans or active-duty I always end up leaving with more from it than I’m sure they did.”

So, what would surprise the world about him? Well, his favorite animal is his wife’s 8-pound Yorkie. “Dolly and I are inseparable,” he laughed. Beck also has a sweet tooth and loves fall because it means eating lots of pumpkin pie.

While Beck knows playing football isn’t equatable to serving in the military, he did have these words of advice for transitioning veterans. “I played football my whole life. Eventually, I’m not going to be able to do it anymore. That’s going to be an interesting transition,” he smiled. “But you know, talking to older guys and things like that, one thing that I’ve learned is that you will eventually have to make sure that you never try and go through anything like that alone.”

He was quick to point out that everyone on the team relies on each other to get the job done and that together, they do amazing things. “We put it into practice all the time. We lean on coaches, players, teammates, things like that. Just finding people to lean on, I think, is such an important and important thing in that stage of life,” Beck added. “You’re never alone, remember that.”