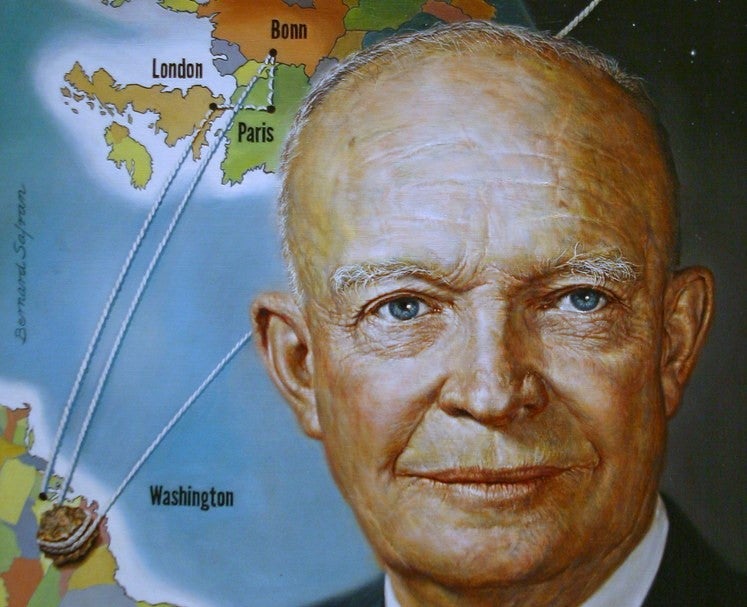 British Field Marshal Bernard Montgomery was a difficult man to get along with. American Generals Omar Bradley and George S. Patton couldn’t stand the guy and even the Royal Navy’s Adm. Sir Bertram Ramsay thought promoting Montgomery to Field Marshal was “stupid.”  It’s surprising that the United States’ Supreme Allied Commander and later President Dwight Eisenhower disliked him most of all. Even more surprising is probably Ike’s hand-painted portrait of “Monty.”

Historian Anthony Beevor tells the story of Eisenhower’s 1952 portrait of his British counterpart, which Eisenhower signed, “’To my friend Monty from Ike,” by noting that the two men didn’t get along from the moment they met. Eisenhower was incensed at Montgomery’s smoking in his presence. Montgomery didn’t think much of Eisenhower’s abilities as a soldier.

Of course, Montgomery didn’t think any less of himself, no matter what his war record looks like. His men famously took heavy losses when they didn’t need to, due to Monty’s attention to detail, especially in taking the city of Caen. Before the disastrous failure of Operation Market Garden, however, Prime Minister Winston Churchill still prompted him to Field Marshal – a rank above the Supreme Allied Commander’s.

But the invasion of Europe didn’t happen without Ike, and when the American landed in France he took command of the ground forces there. Monty was furious, but there was little he could do. Eisenhower was in charge.

Rank didn’t stop Montgomery from rankling anyone though. The Field Marshal took credit for American wins in the Battle of the Bulge and, as Beevor points out, the British command was told that no American would agree to serve under Montgomery ever again.

Monty’s 1958 memoirs were filled with criticisms of his American counterparts, especially Ike. But they didn’t stop at criticizing Americans. Montgomery almost faced a lawsuit for suggesting that British Field Marshal Claude Auchinleck wanted to retreat during the First Battle of El-Alamein in 1942. His lie was so egregious that he was forced to recant it on the BBC that same year.

Having Bernard Montgomery criticize him in memoirs was too much for then-President Eisenhower. Ike railed about Montgomery until the day he died, referring to the Field Marshal as an “egocentric” and a “psychopath.”