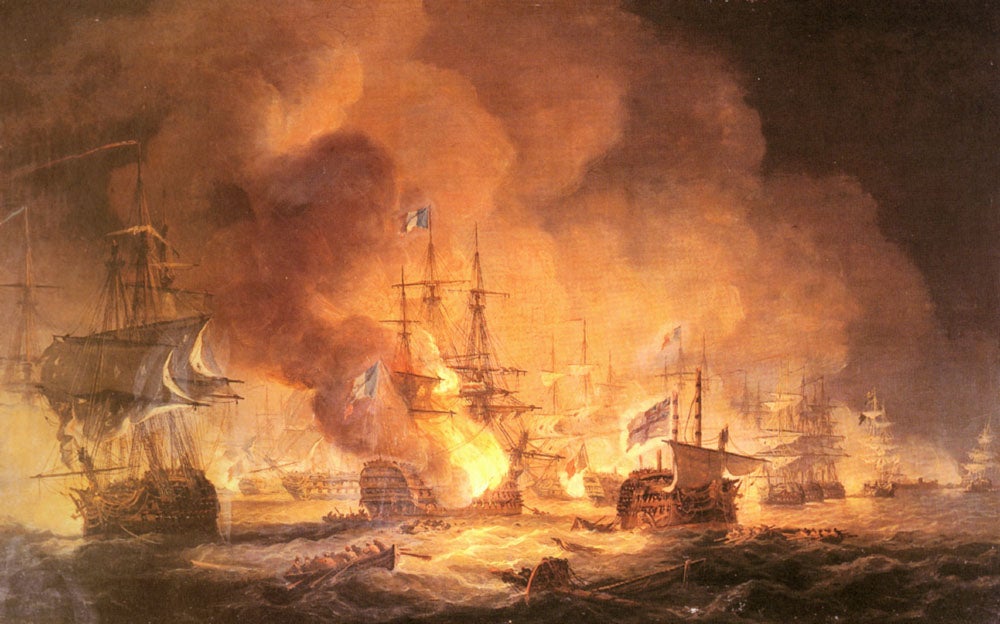 For centuries, the British Empire was as close as any nation could come to global superpower status in the age of sail. The biggest reason for that was the Royal Navy. With its massive numbers of ships, sailors and able captains, the British could (and did) project military power anywhere in the world, relatively quickly.

Many have challenged Britain’s sea supremacy, but very few have come close to matching its seaborne military might. The British Isles haven’t seen a successful invasion since 1066 and one of the biggest reasons for that is the aforementioned seasoning of its commanders. One of them stands heads and shoulders above the rest: Vice-Admiral Horatio Nelson, 1st Viscount Nelson.

Nelson gave the British Royal Navy nearly everything: his eye, arm, and ultimately, his life. But before he left this world at the Battle of Trafalgar in 1805, he revolutionized naval warfare and he did it in the simplest way possible.

When Nelson was given his appointment to the Royal Navy in 1771 naval combat was still a battle of fleet actions, large-scale maneuvers where ships would line up in battle and throw broadside after broadside at an opposing line of ships, hence the name “ships of the line.”

By the time he assumed his first solo command, the year was 1778 and Nelson was at the North American station, fighting the French and Americans and recapturing British cargo ships. He would spend the latter part of the American Revolution in the Caribbean, mostly in single-ship fighting. At this time, he was generally unsuccessful, but he learned much in the way of fighting at sea.

When the Napoleonic Wars restarted in earnest, Nelson was sent to the Mediterranean, where he established a reputation for aggression and good command. He was eventually put in charge of a squadron. He took on larger ships and formations even when outnumbered, and was noted for preventing a French invasion of Corsica.

Victories at Cape St. Vincent, Cadiz, and Santa Cruz soon found Nelson back in action against the French and Spanish after a brief respite in England. Nelson and the Royal Navy were after the French Fleet and by the time they found the French at the mouth of the Nile River, Nelson had perfected his method of reducing enemy fleets to flotsam – used to great effect at both the Nile and at Trafalgar.

Traditional naval warfare, as mentioned above, pits two lines of ships in formation, hurling everything they can at the enemy as they pass. This method of combat actually works against the British sailors for a few reasons. British sailors were more skilled at the rigging and at their guns, meaning they were faster, more maneuverable, and could fire off more rounds, faster.

Also, unlike many European counterparts, the Royal Navy was out to win battles, not more ships. The British were interested in sending enemy ships to the bottom, not with capturing them, this made the British a far more deadly foe in combat, as they aimed for the hull, not the masts and rigging.

So putting British ships into a line and forcing them to stay within a set of guidelines negates the best advantages of British ships and sailors. Nelson, with years of single-ship combat under his belt, changed all that, famously saying “forget the maneuvers, go straight at them.”

Instead of forming a line of battle, Nelson’s ships did just that, engaging the enemy by going straight at the line. British ships were able to get behind enemy ships and fire into the stern of the vessels – its weakest point – with stunning accuracy, raking the ship from stem to stern. On the way, the British took little damage as the enemy vessels could only fire at the bows of the approaching British ships.

With such little risk to his fleet on approach, and willingness to inflict maximum damage at a higher rate of fire, Nelson’s opponents didn’t stand a chance against him. All he did was toss conventional naval warfare out the window and use Britain’s greatest strengths against an enemy that would have no answer for the tactic.