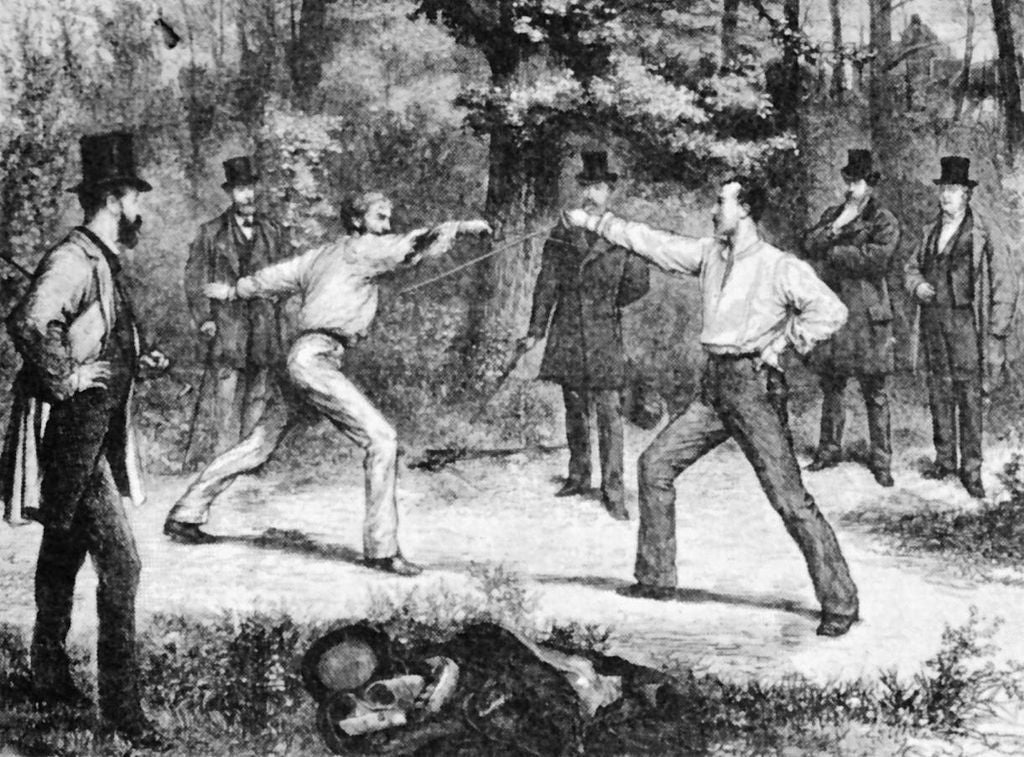 The Code Of Honor—A Duel in the Bois De Boulogne, Near Paris, wood-engraving after Godefroy Durand, Harper's Weekly (January 1875).

Battling in a duel, with either a sword or a pistol, is by far the most violent and barbaric way of settling arguments in history. Also, the most fun imagining. Dueling was commonly practiced from the 17th Century to the late 19th Century and was perceived as a method of earning honor and respect from society. Several movies with medieval settings have demonstrated how dueling worked but sometimes leave viewers wondering if the scenarios really took place. It’s unclear why and how civilized people would stoop to such heinous violence over words.

In ancient times, men were expected to be fearless and willing to defend their honor at all costs. Dueling was all about claiming honor and gaining respect from certain people. Some would duel to prove their words, while some would do it for entertainment, explaining why some duels were lethal while others weren’t. By the 17th Century, pistols were already invented and were considered a fair tool to use during duels. However, the participants were also allowed to use swords. The rules of the dueling were simple; duels were only acceptable between equals, which meant that a servant and master could never duel.

Once dueled, the opponent was expected to accept the offer as doing otherwise would lead to shame. Dueling could happen at any time and anywhere; therefore, young men in the 17th Century were always armed with their swords in case the unexpected happened. Swords were the most commonly used weapons because they were easily accessible and affordable to all since only a few wealthy people afforded dueling pistols. Moreover, pistols in the 17th Century were heavy and weird to carry around. With advancements in gun manufacturing came the introduction of elegant dueling pistols. These fancy boom-boom sticks were crafted of the finest materials, many of which were imported from England. Soon after, pistols became available and lighter hence normalized for use in duels.

The purpose of duels were to settle disputes between rival communities instead of summoning feuds to fight on the battlefield. This way, only two lives would be at risk, and the result would be accepted by all. Some countries, such as Ireland, had a set of rules known as Code Duello, specifically formulated to guide dueling parties. If either opponent violated these regulations, they would face serious punishment. Dueling was so common that officials in high-ranking positions used it to settle their issues. Andrew Jackson – the 7th president of the United States – participated in several duels.

His initial dueling opponent was a lawyer who humiliated him in the court of law. Jackson dueled him, ending his life during the activity. Jackson also dueled a political rival who accused him of adultery. While these allegations were true, the president did not take them lightly, therefore, challenged the first governor of Tennessee to a duel. That iteration ended at a draw among the men’s seconds. The most hilarious one was when he dueled a friend after arguing with him about a horse race. This time President Andrew was not so lucky and ended up with a bullet in his lung that was never removed until he died 19 years later.

Duels were most common among the popular in the society who had an image to protect. It was unusual to witness a duel between two peasant farmers. Later in the years, dueling was banned and termed illegal because it was not the best way of settling disputes.