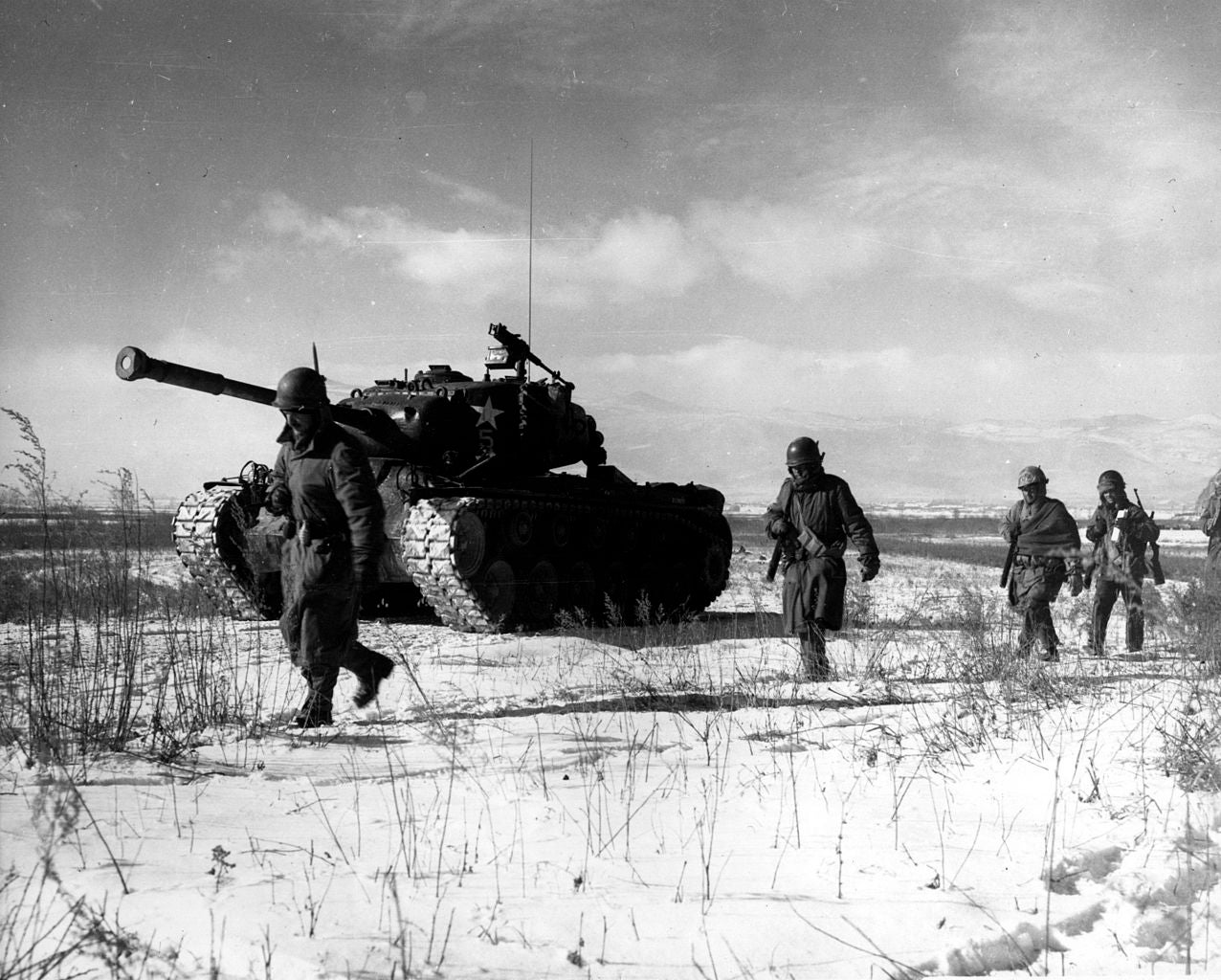 A column of troops and armor of the 1st Marine Division move through communist Chinese lines during their successful breakout from the Chosin Reservoir in North Korea.

The Marine Corps arguably defends and preserves the branch’s history more than any other branch. Our culture is borderline religion and we wouldn’t have it any other way. While on active duty, nearly everything we do or wear has some connection to those who bled before us. To Marines, the history of our units is not just words in a book, it’s personal. Marines operate in every clime and place and the Korean War put that claim to the test. Marines at the Chosin Reservoir ran the risk of freezing to death if they stopped pushing forward under the harshest conditions to ever test our claim.

Here are 5 reasons why the battle for the Chosin Reservoir became the most perilous in USMC history:

While Americans at home were able to enjoy Turkey on one of our most sacred holidays, General Douglas MacArthur is en route to turn the tide against the communist threat during the next phase of the conflict. The North Korean soldiers who had seized the South were withdrawing, and MacArthur’s forces aggressively hunted them through the wilderness, advancing toward River Yalu on the Chinese border. This subsequent two-week fight is among the most significant in US history. The outcome of the War, which is still technically in a ceasefire, would rewrite borders on the world map and influence foreign policy to this very day. General MacArthur promised the troops they would be home before Christmas.

The Korean War’s key turning point was the fight at Chosin Reservoir. Over 120,000 soldiers from the People’s Republic of China encircled 30,000 UN Command forces during the 17 days of intense combat in the frigid weather. Among them were 12,000 members of the First Marine Division who became stranded in the North Korean highlands close to the Chosin Reservoir in the war’s final days. No one could predict that the Chinese would have the gall to get directly involved in the war. Outmanned and cut off, the Marines were in danger of obliteration. Mao Zedong gave these volunteers specific instructions to slaughter the US-led U.N. forces to the last man.

The first Marine Division was the target of the Chosin Reservoir assault, which was launched after it debarked in eastern North Korea and marched interior in harsh winter weather to a hilly region close to the reservoir. The Chinese successfully drove the entire X Corps to flee to South Korea, but they failed at isolating and eliminating the 1st Marine Division, which was their specific goal. The Marines adapted and made a purposeful tactical withdrawal, fighting through a treacherous path over several mountains and an abyss bridge until they got to the transport ships waiting at the shore.

The disregard of China’s resolve to the expansion of communism, MacArthur gave the directive for the 1st Marine and Infantry Divisions to push to the Chosin Reservoir. Underestimating the Communist Chinese would exacerbate the challenges ahead for the Marines. They subsequently made their way westward in the direction of Kanggye, a mountainside mining settlement where the forces of China and North Korea had gathered.

The Chinese were also short of most artillery but mortars and machine guns. Mao was willing to sacrifice his ill equipped troops to the winter frost for the opportunity to hit the Americans. The Chinese thought they had discovered a winning formula for combating the UN Command forces that combined surprise localized attacks, night ops, and greater manpower. Having five divisions along both sides of the reservoir, the Ninth Army Group quickly advanced three more divisions to block the route south of Hagaru-ri. The Chinese simultaneously ambushed the first Marine Division at Yudam-ni, Hagaru -ri, and Kot’o.

The battle that lasted several days also had the hazard of extreme cold. Temperatures 35 degrees below zero would be a death sentence for anyone wounded, friend or foe, mother nature was also out to get some confirmed kills. After engaging the Chinese soldiers throughout the day, the Marines swiftly built their defensive effort for nighttime combat. All main Marine positions held the line for three nights and days of fierce combat, but Task Force MacLean failed.  The 670 wounded survivors of the Task Force attempted to tactically withdraw using scattered formations around the frozen lake.

The 1st Marine Division’s rear guard arrived at Hungnam on December 11 and boarded their awaiting transport vessels. Chinese opposition was defeated, their soldiers destroyed by the elements, lack of food, and unrelenting X Corps firepower. Although the Chinese ‘reclaimed’ the Chosin Reservoir Campaign geographically, their men were destroyed by the end of the conflict.