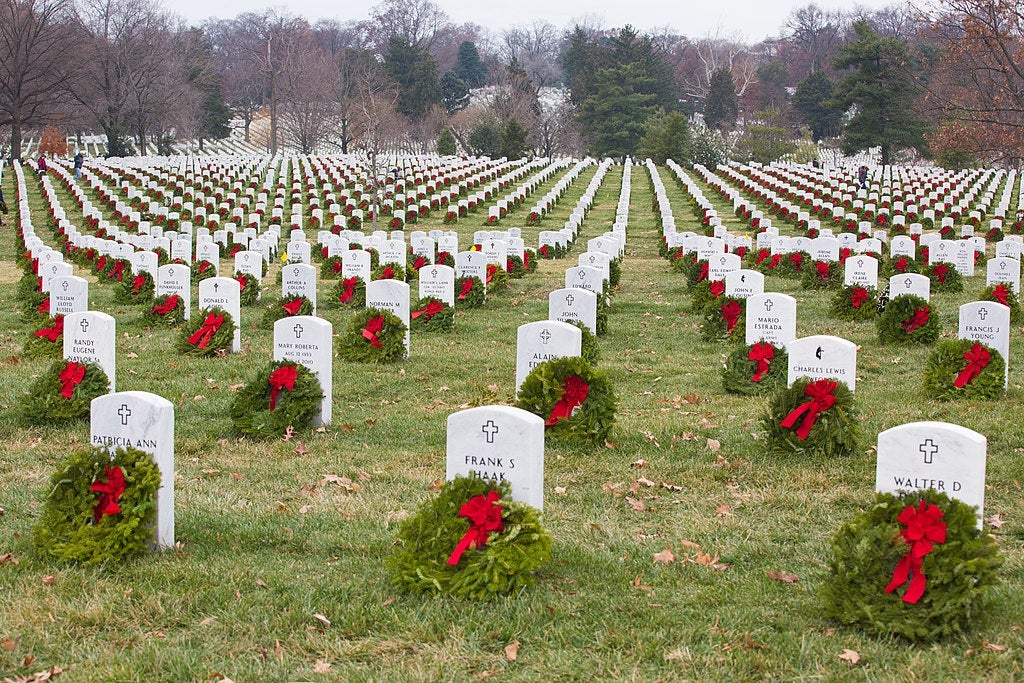 Many volunteers with Wreaths Across America help place more than 100,000 remembrance wreaths on headstones at Arlington National Cemetery, Va., Dec. 13, 2013. The mission of Wreaths Across America[1] is to remember and honor the fallen men and women of the armed forces by coordinating wreath laying ceremonies. (U.S. Army photo by Spc. James K. McCann/Released).

Anyone unfamiliar with presidential history should know that Harry Truman didn’t take guff from anyone and few people were more egalitarian than the one-time enlisted-turned foul-mouthed officer-turned Commander-In-Chief. When he said “the buck stops here,” he meant it.

Rice was a Nebraska native and a United States Marine Corps veteran of World War II’s Pacific theater. He was even awarded the Bronze Star for valor during the New Guinea Campaign between 1942 and 1945. Rice stayed in the Corps and when North Korea’s invasion of South Korea sparked the Korean War in 1950, Rice was there, fighting until the end.

He was sadly killed in action while leading his men during the Battle of Tabu-dong, a critical campaign along the Pusan Perimeter that prevented North Korea from pushing the American and South Korean forces into the Sea of Japan. The battle occurred near Taegu and lasted for two full weeks and the communists attempted to push the lines back and capture the city.

The heroic stand from Marines like John Raymond Rice held the line long enough for Gen. Douglas MacArthur to land at Incheon, outflank the Korean People’s Army and send the communists running back across the 38th Parallel in complete disarray. It also allowed American and South Korean forces to follow them almost all the way to North Korea’s border with China.

Most importantly, the Battle of Tabu-dong held the line and the slight toehold where U.S. troops began to build up strength enough to affect a breakout from the Pusan Perimeter. It was simply a critical point in the first year of the war that changed the fortunes of both sides. John Raymond Rice was killed there.

As his body was being laid to rest on August 28, 1951, employees at Memorial Park Cemetery in Sioux City, Iowa noticed that many of the mourners at Rice’s funeral were American Indian. During the military ceremony, they discovered Rice was himself a member of the Winnebago Tribe and his birth name was Walking In Blue Sky.

Cemetery workers stopped the ceremony and forced his white wife to remove the body from the cemetery ground for this reason. Memorial Park Cemetery was actually the third cemetery to turn down the Rice family because the 37-year-old deceased was of American Indian descent.

President Truman learned that Rice was refused as his remains were being lowered into his grave. while reading a newspaper at the White House. Cemetery officials told the U.S. Army that only members of the Caucasian race could be buried at the cemetery in Sioux City. The Army told the president and President Truman took action the very next day.

Truman, the president who ordered the desegregation of the armed forces and of all national cemeteries, ordered that Rice’s remains be moved to Washington, that he be buried in a plot in Arlington National Cemetery and that Rice’s family be invited to view his internment at the U.S. military’s most sacred final resting place.

Maj. Gen. Harry H. Vaugn, Truman’s presidential aide, telegraphed the mayor of Sioux City: “The President feels that the national appreciation of patriotic sacrifice should not be limited by race, color or creed.”