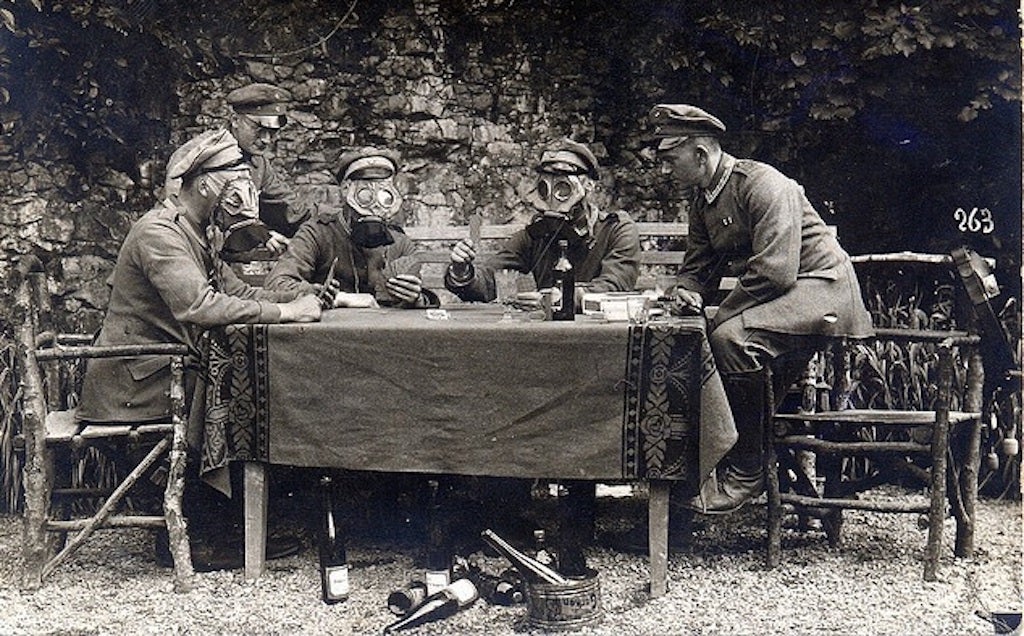 German NCOs from Infanterie-Regiment No. 358 pose for the photographer as if they were drinking wine, feasting on gherkins and playing cards while wearing gas masks in WWI.

For millennia warriors consumed alcohol in the form of wine, thus it became intertwined into military traditions. The exquisite taste, nutritional benefits, and, not least, psychoactive effects all contribute to our natural affinity for this drink. No other alcoholic beverage has had such a profound social influence. The wine trade allowed religious and philosophical thoughts to flow across Europe. From Noah and his grape vines through Jesus, probably the greatest winemaker of all time, wine is widely quoted in the Bible.

Many historians believe that wine was initially discovered during prehistoric times, while others are of the opinion that it is contemporary. Regardless, one thing for sure is that people get happier when they drink wine. Wine has been a constituent of the evolution of civilizations throughout time, playing various roles. Some even claim that it has been a particularly loyal consort throughout our history, having been there in both favorable and unfavorable times.

The history of wine is mainly connected to warriors during the medieval days. Warriors often drank wine before and after battles for several reasons. The Greeks, for instance, always took wine before marching into combat to gain what we now refer to as “Dutch Courage.” War is probably the most horrifying thing that happened in history and still happening. Seeking courage from external forces such as consuming alcoholic beverages was a norm, and kingdoms would ensure soldiers had plenty of wine before any war.

Liquid courage was not only a thing for the Greeks but almost every community in medieval times. The Romans, for instance, realized how boldly the Greeks fought; they integrated the same into their system. When you think about it deeply, this theory made sense because some people are only bold enough to undertake some activities when intoxicated. Even when traveling far distances via land or sea, the soldiers would always take wine along.

Contrary to the Greeks’ customs, the Vikings would consume wine because they believed it was a drink made by their gods. Since most of their lives were spent fighting, they would drink plenty of wine. They also thought that the soldiers would go to Vaal Hala once they died, where they would drink wine while dining with their gods and fallen family members. While drinking was not the best thing to do, the Vikings and other communities loved it.

After winning a war, they would celebrate by drinking themselves stupid till morning. The wine was even given to children at a young age to signify their manhood. Unfortunately, women were not allowed to drink as much as men because they were not considered warriors. A woman found drinking was seen as a disgrace to his family and would not get a husband.

Years after the medieval ages, the wine drinking culture changed, and soldiers turned to other forms of consorts. The reason for indulging in these intoxicating substances is still the same nonetheless. It is not unusual to find soldiers sipping alcohol or smoking cigars moments before a war. Most soldiers claim that intoxication helps them keep calm in life-threatening situations. In fact, some soldiers succumb to alcoholism as a result of excessive consumption during active duty.

This has been an issue in the military force since World War II, but the military service has implemented several programs to help soldiers overcome such challenges. The history of wine drinking before and after battle dates back thousands of years back, even before civilization. The culture will probably live on for quite some time as long as wars exist and soldiers have to march to dangerous war zones.