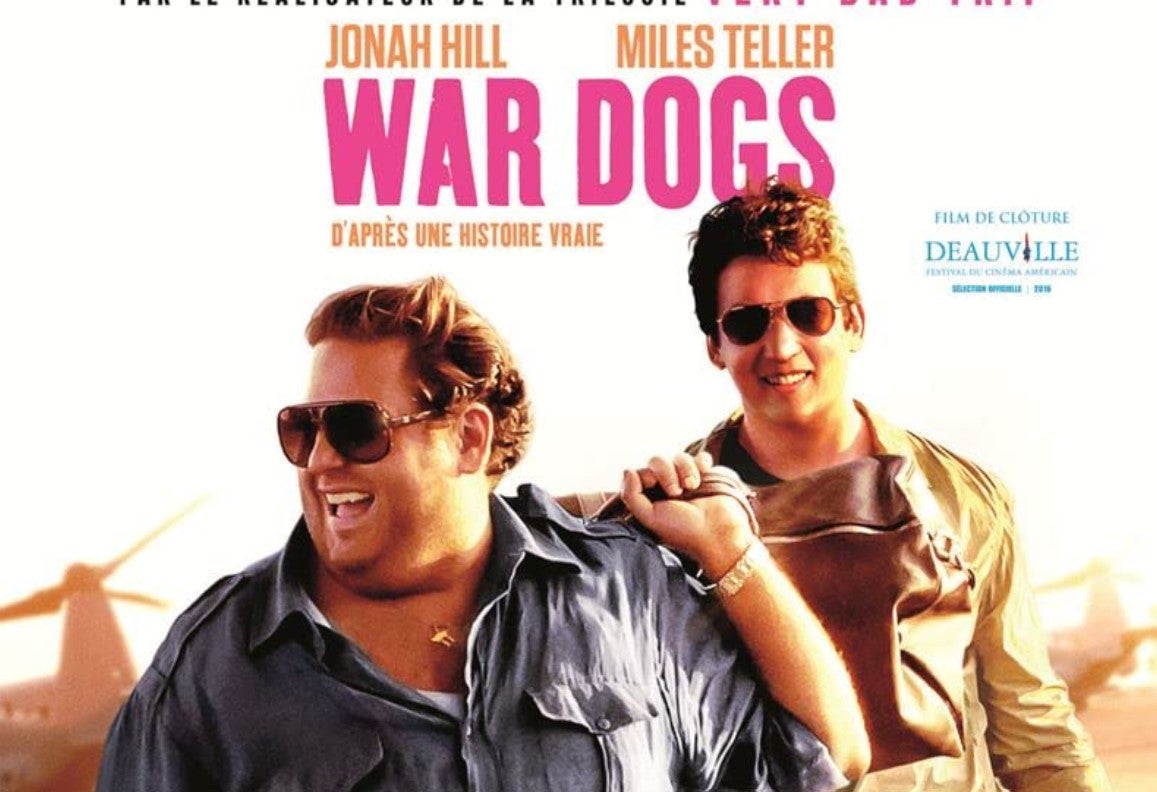 Two childhood friends take advantage of a loophole in the way the U.S. military puts out its contracts and become international arms dealers. Yet, it’s the crazy true story on which the movie War Dogs is based. Add to that the stellar performances of co-leads Jonah Hill and Miles Teller and you get a dark comedy veterans and civilians alike can crack a beer and watch together.

Inspired by the improbable adventures of Efraim Diveroli and David Packouz (who has a cameo singing “Who fears the Reaper” in the retirement home scene), the movie addresses a mostly comedic tone on a very serious subject: international arms trafficking. Although some people criticized the comical treatment of the subject, the minimization of the US government’s part in the story. What better way to get people interested in a serious and controversial topic than by giving them a good laugh?

With sleek action, a rocking soundtrack and well-crafted dialogues, the movie offers to take the viewers through the rollicking adventures of two Miami pals living the high life. Drugs, guns and accompanied by women with a shaky morale compass? They’re borderline CIA material at this point. Yet, by and by, the promised buddy comedy turns into an indictment of unrestrained capitalism, human greed and the Administration that led to the war in Iraq. War Dogs is a dark comedy that pelts you with laughs and insights into the heart of human depravation with the same enthusiasm and leaves you with a smile on your face reciting, ‘Fallujah bad!’

2. Veterans would not have made the same mistakes

After all, how can two regular guys without any particular qualifications become suppliers on multi-million dollar contracts for the most powerful military in the world? What devil did they bargain with to become such wealthy international arms dealers? Can any shred of morality survive in this business? Also, how do we get in on that? Asking for a friend.

Jonah Hill and Miles Teller each deliver a Terminal Lance-like performance in their respective roles. Hill, playing a bloated, cocaine-using Efraim Diveroli (Hill gained 44 pounds for the part), reprises a role somewhat similar to his part in The Wolf of Wall Street. He’s equally sleazy, callous and convincing in both roles. As the more naïve Packouz, Teller is almost innocent enough to be touching. The characters are a charismatic scumbag and a gullible, yet loyal friend who get in over their heads. Neither were evil masterminds. Albania, a Communist country for a long time, made 80% of its trade with China. That fact alone would have alerted more clever businessmen about the dangers of dealing with communists. It takes a special mindset to accept to exchange one’s integrity and morality for money.

3. Its a commentary on unchecked capitalism

That mindset is the one fostered and encouraged by unbridled capitalism. As Diveroli says: “God bless Dick Cheney’s America!” How many young Americans are taught that it’s all about making money, no matter the cost? That everything can be accepted and forgiven if it’s in the name of profit? In the same vein as The Wolf of Wall Street and The Big Short, War Dogs uses dark comedy to denounce massive moral failings in the modern capitalist society. It makes us laugh about a profound and disturbing truth. Maybe it’s a laugh to avoid crying.

That’s why War Dogs is the best civilian war movie. Its narrative is sleek and its story is almost too incredible to be true. The talented leads make the characters convincing, touching, absolutely un-relatable, flawed and funny, yet it is difficult to really hate them without seeing them as products of a broken environment. Its light premises lead to a mordant analysis of politics and corruption in the early 2000s. It gives enough laughs and action scenes to make the pill easier to swallow. Especially when your buddy says “I was in Fallujah,” and sh*t you not, he has pictures. It’s an uncomfortably entertaining movie that sits between the private and public sector of the war.