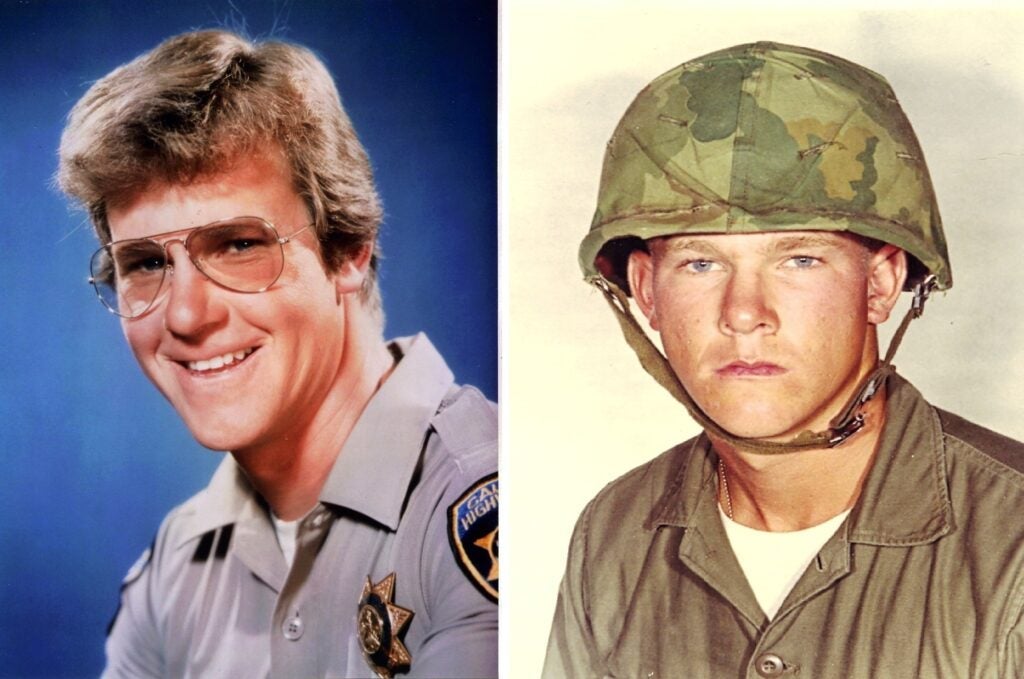 Yes, that’s right folks, here are a Few More Good Men became famous Marine actors who previously served. Some may surprise you while others might make total sense. There will be some you likely haven’t heard about but, hey check out some classic movies in your off time with these Marine stars and you might learn something there, kid!

Here are several Marines who became actors in famous films

Bo Svenson is a Swedish-American actor, director, producer, author and screenwriter who has appeared in two of Quentin Tarantino’s movies. He was born in Sweden and emigrated to the U.S. when he was 17, which was in the late 1950s. He joined the US Marine Corps and served for six years until his honorable discharge. He did a lot of different jobs which included being a race car driver. Svenson is a martial artist with a fourth-degree black belt in judo. During his time in the Corps, he was stationed in Japan and was the 1961 Far East Judo Champion in the Heavyweight division.

He got his first big break opposite Robert Redford in The Great Waldo Pepper as he and Redford played rival former Army Air Corps pilots who now fly as barnstorming pilots in the Midwest. He worked on the hit original version of Magnum P.I. and is the only actor to appear in both Inglorious Bastards by Tarantino and The Inglorious Bastards, the original 1978 film. Svenson also appeared in movies such as Kill Bill: Vol. 2, Final Chapter: Walking Tall, North Dallas Forty and TV shows JAG, The Commish, The High Chaparral, McCloud, The Virginian, The Fall Guy, Hunter and Kung Fu.

Philip Carey’s acting career lasted six decades and across a span of media. He worked with stars such as Joan Crawford, Doris Day, John Wayne, Henry Fonda and director John Ford during his early career in such films as Operation Pacific, This Woman is Dangerous, Mister Roberts and Calamity Jane.

He then transitioned into more TV roles on 77 Sunset Strip, The Rifleman, Cheyenne, Laredo and All in the Family. His latter career was a continuous role in One Life to Live. Before all of his on-screen work, he served in the Marine Corps and was wounded during World War II as part of the USS Franklin’s Marine detachment. He served a second time in the Corps during the Korean War.

Sterling Hayden’s career as an actor lasted more than 40 years from the early 40s to the early 80s. He starred many times in westerns and film noirs such as The Asphalt Jungle, Johnny Guitar and The Killing. He also was a “lovable” character in Dr. Stranglove or: How I learned to Stop Worrying and Love the Bomb and a crooked police captain in the Godfather who met his untimely demise at the hand of Michael Corleone.

Hayden served in the Marine Corps during World War II and with the Office of Strategic Services. His service during the war and with the OSS included running supplies via motorboats from Italy to Yugoslav partisans. He also parachuted into Croatia at the time. He was awarded the Silver Star and Order of Merit. He returned home and found success as a leading man.

Tyrone Power was a star of Hollywood’s Golden Age from the 1930s to the 1950s. He was known for his swashbuckler roles as well. His films include Jesse James, The Mark of Zorro, The Black Swan, Captain from Castile, Witness for the Prosecution and Blood and Sand. He was a matinee idol in the 1930s and early 1940s, then transitioned into more serious roles.

Power joined the Marine Corps in 1942 and maintained a career in the reserves post World War II up until his passing in 1958. His final rank was a Major in the USMCR. He flew cargo planes during the war in the Marshall Islands, including flying missions of cargo and carrying wounded Marines out during the Battles of Iwo Jima and Okinawa.

Larry Wilcox is recognizable to the public as California Highway Patrol officer Jon Baker in the TV show CHiPs which ran from 1977 to 1983. Before enlisting in the Corps in 1967, Wilcox worked as an actor and rodeo cowboy. He served in Vietnam and during the Tet Offensive in Artillery and left the Corps as a Staff Sergeant in 1973.

His acting career spanned many shows before getting his big break in CHiPs including roles in Room 222, The Streets of San Francisco, Cannon, Lassie, Hawaii Five-O, M*A*S*H, Fantasy Island and Police Story. Post his time as Officer Jon Baker he has worked in many different TV movies and feature films which include The Dirty Dozen: Next Mission, National Lampoon’s Loaded Weapon, CHiPs 99, yes a reunion movie with Ponch and Jon, and Deadly Lessons.