Exploring the myths about actor James Cagney - We Are The Mighty 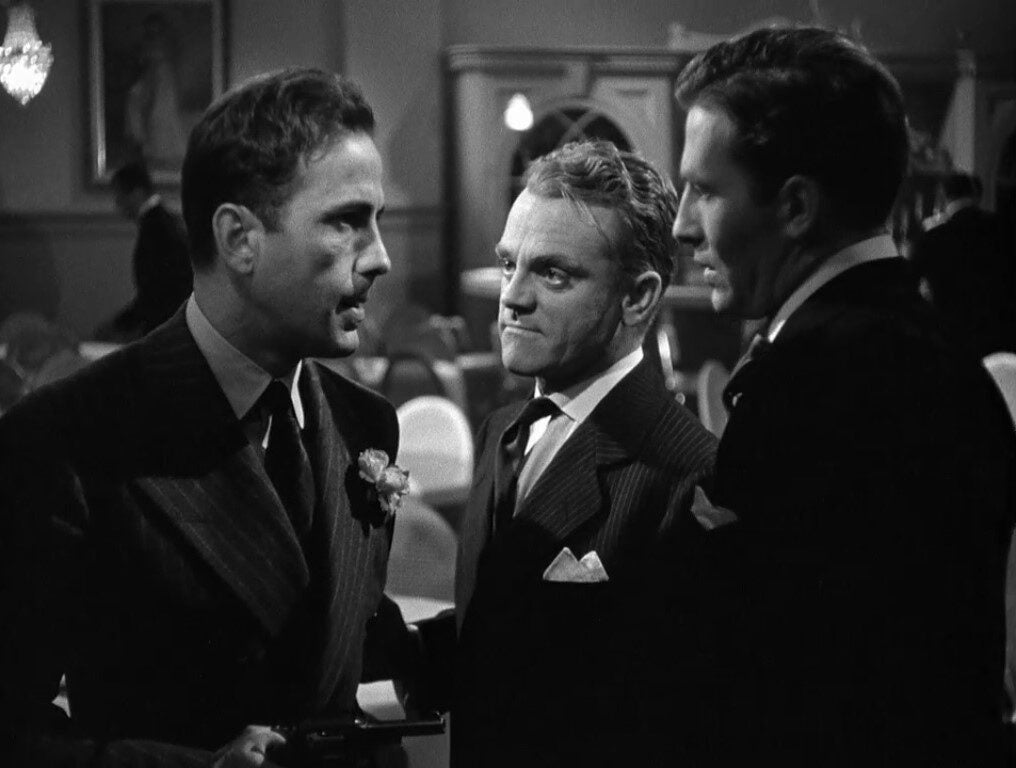 As with any iconic figure, certain myths exist about James Cagney. The jaunty, short tough guy—onscreen as well!—never actually said, “You dirty rat.” He also wasn’t really in his heart a tough guy. When asked once what he wanted his legacy to be, what he wanted his tombstone to read, he shot back: “Song and dance man.”

Indeed, his 1942 turn as George M. Cohen in “Yankee Doodle Dandy” was a tour de force that earned him an Academy Award and represented quite a departure from the volatile kid that fell flat on his face in “Public Enemy.” In fact, Cagney’s emotional scene in Yankee Doodle, when he says goodbye to his dying father, shocked audiences for its authenticity and depth.

Cagney played several military-centric roles, including in this iconic scene when he joins the Army:

Seemingly gliding on his toes through life, Cagney was an in-your-face tough and he said well into his career that the rapid-fire dialogue he was famous for in his films was simply borrowed from an endless stream of characters he knew growing up in New York’s Lower East Side.

“Whaddya say, whaddya know!” was a phrase repeated endlessly, and was never really put as a question, but rather an exclamation from a guy so confident, he unnerved even long-time friends. Cagney was humble though, and maintained that he was just a regular guy drawing on much compelling characters from life.

Okay, believe that if you want. The truth is, he created some of the most memorable performances the world will ever see. Though considered shocking today, his grapefruit to the face of Mae Clarke is one of the most famous movie stills of all time. His final role as “Terrible Joe Moran” was a fitting end to a glorious career, coming two years before his death at 86.

He never lost sight of his roots, saying later in life of hard work early on, “It was good for me. I feel sorry for the kid who has too cushy a time of it. Suddenly he has to come face-to-face with the realities of life without any mama or papa to do his thinking for him.”

But it is a small story that perhaps best describes the essence of James Cagney. It is at once funny and instructive, because it spotlights the tension between genius and nonchalance.

The story goes that an earnest young actor practiced how he would approach the Great Man, and ask for any golden acting nuggets the tough guy would care to toss his way. After all, he’d been at it for decades and had become an icon long ago. A word or 10 from the Great Cagney might make this young fellow’s career.

“Look, the old man said with the same semi-disdain he dispatched gangsters onscreen, “Let me tell you my secret.”

The earnest fellow leaned in.

“I get to the set, you see, drive up. I get out, walk to the set and find the director…”

You-know-who was hanging on every word, typing mental notes with the speed and force of a seasoned secretary.

With that, Jimmy Cagney sat back and cracked the faintest smile. His young charge blinked, his mind asking him where the rest of the life advice was.

That was it. That was the acting tip or tips.

In that brief comment—when an acting hopeful was hoping for book-length advice—Cagney really did offer a goldmine of information. He was saying of course that an actor has to show up on time, know his lines, having done his mental preparation in whatever fashion he chose, and then…just find his mark on the stage floor.

That’s it. The ability would come from within. One didn’t have to devote a year of one’s life to “becoming the character,” though that worked fine for some guys named Brando and Dean.

(Someone once asked Robert de Niro how he transformed his chiseled physique to play an aging, thicker Jake LaMotta, he deadpanned, “I ate my way through Italy.”)

For Cagney though, authenticity didn’t require angst and suffering as an actor. Just tell me where to stand and get out of my way.

At the end of such days on set, he would then get back in his car, slam the door the way Rocky Sullivan might have. Heck, he might even chuck a young fan on the chin and then speed away with his signature wave. He’d drive out to one of farms to reflect, paint, and enjoy family.

We can apply Cagney’s singular advice when life gets too complicated for us. When we have turned a problem over and over, coming to no conclusion. Maybe that’s the time to simplify. Maybe you look a thorny problem in the eye, shove a grapefruit in its face and say, “Just tell me where to stand!”