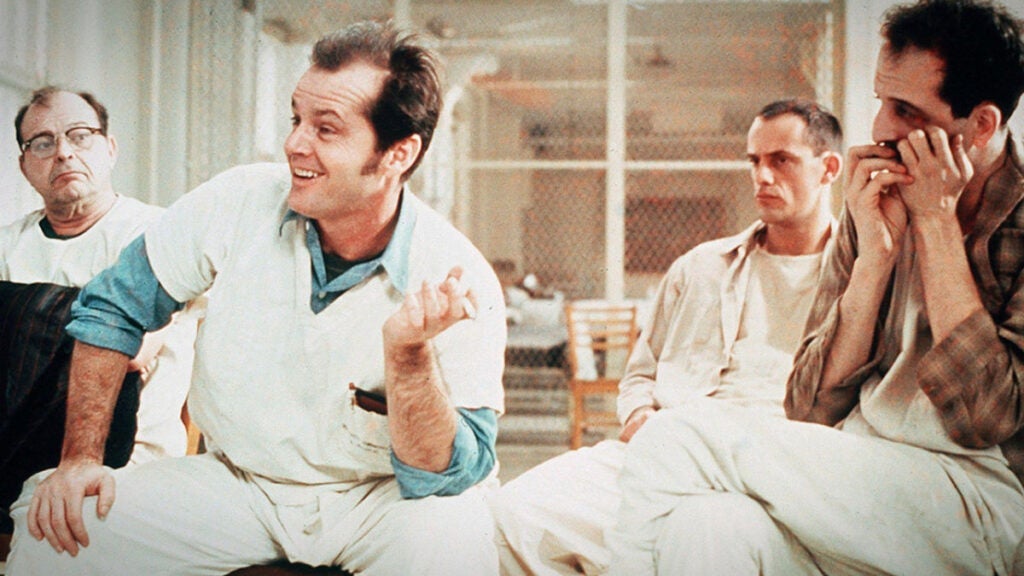 1. Morgan Freeman in The Shawshank Redemption.

Logline: Two imprisoned men bond over a number of years, finding solace and eventual redemption through acts of common decency.

Freeman turns out his greatest performance on screen and should have been awarded the Oscar in 1994. His portrayal of Red has so many nuances and creative brilliance in his casual delivery anything like it will likely not be seen on film ever again. His voice-overs and straight from the heart commentary within the story are the stuff of legends. His performance could be watched over and over again without a loss of interest from me.

Freeman served in the US Air Force in the late 1950s before turning to act.

2. Jack Nicholson in One Flew Over The Cuckoos Nest.

Logline: A criminal pleads insanity and is admitted to a mental institution, where he rebels against the oppressive nurse and rallies up the scared patients.

Nicholson churns out yet another Oscar-worthy performance in a career littered with award-level work in almost every role he has done. He plays a rebellious and crafty character that antagonizes the passive-aggressive bully, Nurse Ratched, played by Louise Fletcher. Nicholson’s portrayal of McMurphy is a mix of fun, humor, sarcasm, rebellion and defiance laced with violence that drives the story onward to a shocking and brutal conclusion.

Nicholson served in the California Air National Guard as a firefighter in the late 50s to early 60s.

3. James Earl Jones as Darth Vader in Star Wars (yes all of them) and as Admiral Greer in the initial three Tom Clancy films.

What’s to say that has not been stated about the awesomeness of James Earl Jones, his command presence, his acting and that iconic voice? Well, nothing. Just sit back, watch and learn some lessons in delivery, diction and overall coolness from one of the masters.

Jones served in the U.S. Army as an officer post-Korean War and earned a Ranger tab before leaving the service as a First Lieutenant.

4. Anthony Hopkins in Silence of the Lambs.

Logline: A young F.B.I. cadet must receive the help of an incarcerated and manipulative cannibal killer to help catch another serial killer, a madman who skins his victims.

Hopkins plays Lecter with a sophisticated, genius touch that has the right undercurrents of menace to initially calm and then frightens even the savviest of victims. He left an indelible mark on many audience members’ psyches with his performance, which has stood the test of time for over 30 years as one of, if not the most, lethal and insanely smart characters ever to grace the silver screen.

Logline: An insane American general orders a bombing attack on the Soviet Union, triggering a path to nuclear holocaust that a war room full of politicians and generals frantically tries to stop.

Sellers nailed three roles in the film as the President of the United States, Group Captain Lionel Mandrake and most importantly, his role as the eccentric, comical, maniacal and just plain weird Dr. Strangelove. His delivery is as comedic as it is intense. His mannerisms are ridiculous yet believable. Interestingly enough James Earl Jones made his film debut in the movie.

Sellers served in the Royal Air Force during World War II from 1943 to about 1945.