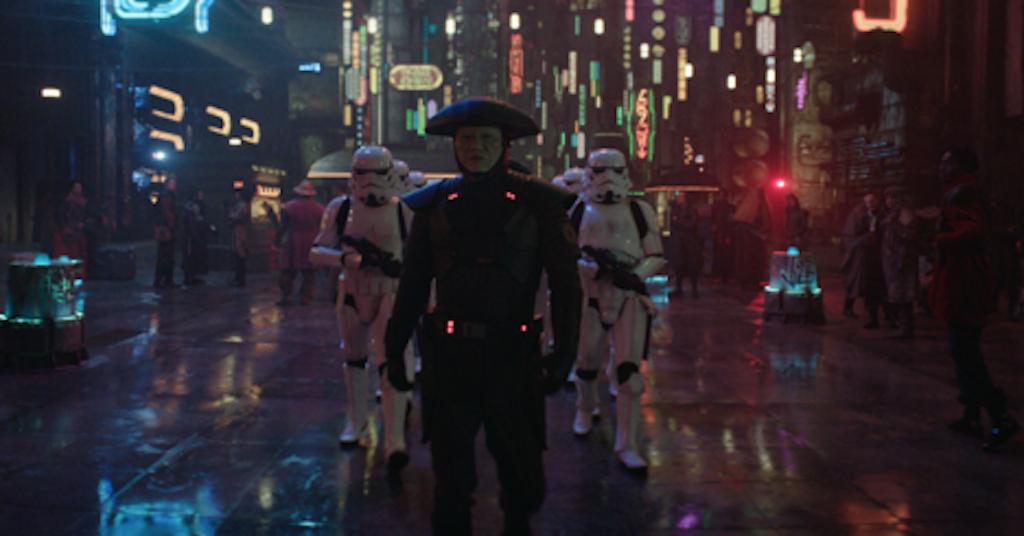 Obi-Wan Kenobi Part II picks up on the seedy city planet of Daiyu, where Princess Leia is being held captive by pirates in order to lure Kenobi out of hiding.

One of my favorite moments in the episode is when Obi-Wan encounters an aged Clone begging for money. This was a man who would have carried out Order 66 and slain as many Jedi as he could — and perhaps still would. Now, he looks all too familiar to anyone who has seen what happens when veterans are forgotten by the world. Obi-Wan gives the man some credits and continues on his way.

Obi-Wan follows a street-savvy child to a “Jedi” played by Kumail Nanjiani, a complicated crook who does seem to help people but also scams them and charges them. Nonetheless, he provides helpful information to Obi-Wan, who manages to track down Leia, dope up her pirate captors with some Spice, and flee.

While on the run, the clever princess questions whether Obi-Wan is who he claims to be, as he does nothing to actually behave like a Jedi Knight. When Reva discovers that he and the princess escaped, she releases a bounty on Kenobi, alerting every bounty hunter in the city of his face and description. Seeing this, Leia tries to run away and nearly falls to her death until Obi-Wan uses the Force to levitate her and set her down gently.

Their run through the city, however, draws the attention of bounty hunters and the Inquisitors. Reva corners Obi-Wan on a rooftop, taunting him, telling him that his fear betrays him and informing him that Anakin survived their battle on Mustafar and became Darth Vader. She is interrupted by the High Inquisitor, who is displeased that she refuses to follow orders in her vendetta against Kenobi. She returns his scorn with a lightsaber driven through his chest — but in the distraction, Obi-Wan and Leia manage to leave Daiyu toward safety.

The episode ends by teasing Hayden Christensen’s return as Darth Vader, sensing his old Master from a bacta tank.